During his yearlong tenure, the governor plans to push for an overhaul of the nation’s aging infrastructure. Hogan will host four regional summits on the pillars of his initiative, which include relieving traffic congestion, integrating smart technology, strengthening the security and resiliency of infrastructure, and leveraging investments from the private sector.

“One of the things that makes Americans so special, so exceptional, is that when we see something that’s broken, we fix it. Or at least we try to,” Hogan said in his speech to the governors.

The governor is calling his initiative “Infrastructure: Foundation for Success.” 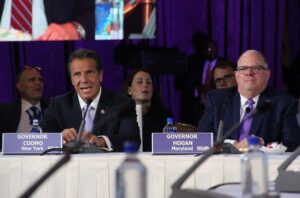 “As NGA chairman, I intend to highlight the great work of all our governors,” Hogan said. “We also plan to bring together thought leaders from government, business, nonprofits and academia to come up with new ideas and innovative solutions to help solve the infrastructure crisis in America and to help the nation’s governors drive action from our leaders in Washington.”

Not all Marylanders support Hogan’s infrastructure efforts, however. A 2018 poll by the Washington Post and the University of Maryland found most voters opposed the governor’s highway-widening project, wishing instead to direct funds toward more public transit. Voters who supported adding lanes to the highways didn’t support paying tolls to cover the cost.

Still, there’s growing national concern about crumbling infrastructure’s impact on the economy and widespread support for more spending to fix the problem.

President Donald Trump made infrastructure improvements a key promise of his campaign, but efforts at the federal level have so far failed to get off the ground. This spring, a White House effort to channel $2 trillion into an infrastructure plan fell apart after the president bickered with Democratic leaders over trade deals and investigations into his personal finances.

Hogan has been a vocal critic of Trump, even toying with the idea of challenging him in a primary run. Earlier this month, Hogan called the president’s Twitter comments about four minority members of Congress “terrible and unbecoming of a president. Totally inappropriate.”

As he took over the helm of the National Governors Association on Friday, Hogan alluded to “petty rhetoric” from national lawmakers and urged his fellow governors to be a voice of bipartisanship that rises above the din of D.C. politics.

“To those who say that our political system, like our infrastructure, is too broken and can’t be fixed, I would argue America’s governors have already shown a better path forward,” Hogan said. 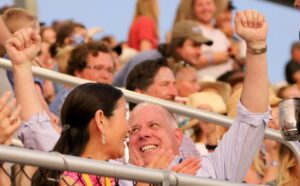 The National Governors Association is comprised of the nation’s 55 state and territorial governors. The governors elect association chairs and vice chairs.

Hogan served as vice chair last year. Vice chairs almost always take over as chair the following year, unless they leave office or can’t commit to the position.

Montana Gov. Steve Bullock (D) handed off the gavel to Hogan after wrapping up his own yearlong national initiative, which focused on helping the workforce adapt to digital disruption. New York Gov. Andrew Cuomo (D) was selected as the new vice chair.

During the governors’ three-day summer meeting in Salt Lake City, they also discussed issues about human trafficking, rural communities and cybersecurity. The governors also attended the Utah Pioneer Days rodeo and some enjoyed a special performance by Donnie and Marie Osmond.

All posts by Leia Larsen