A Danish firm announced that the power-generating wind turbines it will place off the coast of Ocean City will be assembled at the Baltimore County site that was once home to a Bethlehem Steel plant.

Ørsted U.S. Offshore Wind plans to erect between 12 and 15 wind turbines 20 miles offshore in the Atlantic Ocean. The devices will be constructed on a portion of the 3,300-acre site along Sparrows Point that is now owned by the logistics giant Tradepoint Atlantic.

The firm has built and operates several wind farms in Europe and Asia, and it has a smaller five-turbine farm near Block Island off the coast of Rhode Island.

At a press conference Tuesday morning, officials with the two companies, the state and the county said the development of what Ørsted is calling the Skipjack Wind Farm will boost the state’s economy while providing enough energy — 120 megawatts — to power 35,000 homes.

Officials said the project will generate 1,400 jobs — more than 900 during development and construction, and nearly 500 during operation.

Officials said preparation of the site will begin in the coming months. They expect the turbines to be installed and generating power by 2022.

Asked whether the wind farm will be visible from the shoreline, Claus Møller, chief operating officer of Ørsted U.S. Offshore Wind, described the visual impact as “very limited.” 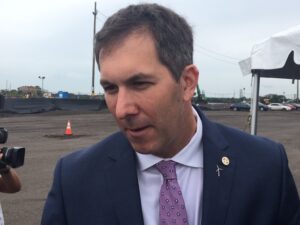 The closing of the Bethlehem Steel plant in 2003 dealt a blow to the eastern part of Baltimore County, and Lt. Gov. Boyd Rutherford (R) said it wasn’t that long ago that “this site looked like the scenes from the first ‘Terminator’ movie.’”

“Never before have we been able to celebrate the start of an offshore wind staging center in Maryland,” he said. “And I can’t think of a site that is more perfectly suited for that task.”

An Ørsted official said offshore wind farms are expected to spring up in the coming years all along the East Coast, including in New York, New Jersey, Rhode Island and Connecticut, as the push for clean energy grows and the costs of production drop.

The project was awarded offshore wind renewable energy credits by the Maryland Public Service Commission in 2017.

“This is a good thing for Baltimore County and for Maryland,” said Alison Prost, Maryland executive director of the Chesapeake Bay Foundation, in a statement. “This center will provide more resources to revitalize a property that is trying to mitigate legacy pollution contamination from the former steel mill. The center will also advance a much-needed renewable energy source in the state and serve as an example of how the renewable energy industry can provide jobs as well as boost the local economy.”