Third in our series “Under New Management,” looking at the new executives in five large counties.

The man shuffling from table to table at the 29th annual Affordable Housing Summit, at the North Bethesda Marriott Conference Center a few weeks ago, looked and acted like any Wonky Joe who might attend such events.

Wearing a tweed coat and dark slacks, the man carried the conference swag bag (“Affordable Housing: A Key to Opportunities!”), and he had lengthy conversations at several tables, some sponsored by construction firms, others by nonprofits.

The conference attendee appeared to be in his element.

So it goes when voters elect a policy wonk to be county executive. 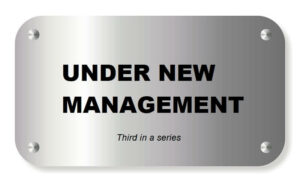 Unlike a Douglas M. Duncan, the former Montgomery County executive who never traveled without his communications guy, a Wayne K. Curry, the late Prince George’s County executive who also had an entourage, or ex-Baltimore mayor Catherine E. Pugh, who was trailed everywhere by a 20-something with a video camera, Montgomery County Executive Marc B. Elrich (D) cuts an unusual figure at events like this one.

Where others would pop in, shake a few hands, give an upbeat (typically generic) speech, perhaps give an interview, and bolt, staff and security in tow, Elrich’s bag is more “let’s soak this in.”

“This guy was showing how they had skinned existing buildings to improve their energy efficiency,” Elrich tells the only reporter visible for miles, in an attempt to explain one of his lengthy table-side conversations.

After decades as a legislator — on the Takoma Park Council and then countywide — Elrich is now in his eighth month as county executive.

He admits it’s exhausting and different.

His management theory, at least so far, includes the belief that he can’t have meaningful conversations with his department heads if he doesn’t know as much about their areas of expertise as they do. That’s an admittedly tall task.

“I’ve always been kinda comfortable being me, which is not a show horse,” he said in a recent interview in his Rockville office. “I tend to get into things pretty deeply.”

At least one member of his staff — someone who has seen multiple newbie execs learn the ropes — thinks Elrich has been slow to learn how to delegate. And even though he spent a dozen years on the county council, he appears to have an on-again, off-again relationship with the council – which now consists of several young, ambitious members, many of whom probably imagine themselves becoming county executive in the not-too-distant future.

The 69-year-old executive acknowledges that he’s been going seven days a week since taking office, a pace that probably isn’t sustainable.

But a series of unpleasant of jolts early in his term have keep him busy. There was the meeting, on his second day in office, where he was told about the $50 million hole in the county’s budget. Then there was the warning from state budgeteers to write down $40 million in fiscal 2019 and another $40 million next year.

And then there was the crisis surrounding the county’s public safety radio system, which failed for an extended period on a weekend in mid-May.

In the interview, Elrich never mentioned his predecessor, three-term executive Isiah Leggett (D) by name, but it’s clear he thinks Leggett, a trailblazing and iconic figure in Maryland politics: a) could have done a better job running the county, and b) could have given him more warning about the problems he was inheriting.

“I wish somebody had told me,” Elrich said of the budget challenges that awaited him. “I know they knew what the revenue situation would be. And it would have been good to know. You would have been prepared for it. And they could have ordered departments to start working on budget cuts.”

The failure of the radio system drew sharp attacks from Gov. Lawrence J. Hogan Jr. (R), the nine-member county council, made up entirely of Democrats, and The Washington Post editorial page – which frequently uses Elrich as a punching bag. 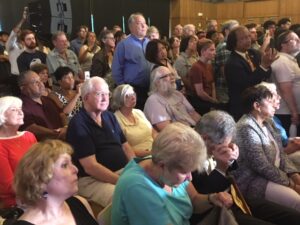 Elrich said the criticism misses crucial facts: The system is technically obsolete, was due for replacement a decade ago, and nothing he did in seeking a review of two tower sites that generated community opposition has delayed the installation of the new system, which is still due to go live in fall 2020.

“I inherited a system that’s not been supported since 2009,” Elrich said. “They are literally buying parts off of eBay and were recently going to [Northern Virginia] and going through a junk bin to find used parts that they might be able to use on the system to keep it alive. This is what I get.”

According to the executive, the state’s decision not to build a tower near Georgia Avenue and MD 200 (the Intercounty Connector highway) was a factor in the county’s search for a new site.

“One reason we weren’t looking very hard for other sites is it was cheap to us to build on their tower,” he said. “It’s kind of frustrating.”

[Earlier this month, Hogan assured the International Association of Fire Fighters in a letter than the tower will be built. “While certain local officials have expressed concern over the location of the tower, our administration remains committed to providing our emergency responders with the tools necessary to adequately protect our communities,” Hogan wrote. “We will advance this needed radio tower … at the ICC and Georgia Avenue site.”]

The top official in Maryland’s largest county, Elrich claimed he is still eager to have a good relationship with Hogan. But there are signs the two have yet to get there.

One notable moment of public tension came when Elrich testified before the Board of Public Works, which Hogan chairs, on the Maryland Department of Transportation’s proposal to build privately financed express toll lanes on the Capital Beltway and Interstate 270, the two busiest roads in Montgomery County.

As Elrich rose to offer his thoughts during the public comment period, Hogan announced that speakers would be limited to 60 seconds. Clearly flustered, Elrich complained that that was insufficient time. Hogan stood his ground, and the men bickered, the strain palpable.

Elrich insisted that he has an excellent relationship with Hogan’s transportation team (“they’re really smart, really good people, I like them”), but he continues to fight the governor’s plans to widen Interstate 270 two lanes in each direction.

In the executive’s view, Hogan should widen the American Legion Bridge and the western-most part of 270, then add two reversible lanes to 270, running southbound in the morning and north at night, when traffic volumes are at their worst. 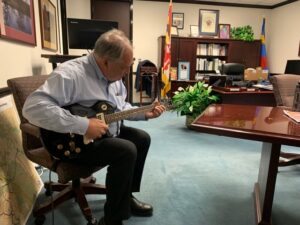 The result, he believes, would be far more congestion relief at far less cost than the state’s plan.

Elrich also repeated his claim that — under the Hogan plan — people who drive Interstate 270 will effectively be subsidizing commuters who rely on the Beltway, because as he sees it, widening I-495, which runs through residential neighborhoods and has very little buildable land, is going to be “stunningly expensive.”

“I still wish he’d do it,” Elrich said of his alternative approach. “I wish he wouldn’t just take potshots because he’s mad. I don’t do that.”

‘Get away from these grandiose plans’

Other highlights from Elrich’s Q&A with Maryland Matters:

“I spend a lot of time talking to people in the private sector to figure out what do we do to change the brand of Montgomery County,” he said.

“I’ve been working with staff to get away from these grandiose plans that kind of got blown out of proportion and come back and build what you need to deal with rush hour.”

BRT is another area where Elrich and Hogan don’t quite sync up.

Elrich said the governor was willing to connect White Flint with four BRT lines to lure Amazon, and he was prepared to expand the MARC commuter railroad system for the e-commerce giant.

Even though Amazon chose Crystal City, Va., instead, Elrich still sees value in the transit projects Hogan was willing to green-light during the state’s negotiations with the company.

Next: A look at Howard County