Maryland faces a $2 billion gap in keeping its transit systems in a state of good repair over the next decade, according to a new Department of Transportation report.

The numbers are contained in the state’s first Capital Needs Inventory, an assessment mandated by the legislature in 2018 to give lawmakers and others a clear view of how the state’s transit needs measure up against expected revenues.

“What it shows is what the General Assembly and transportation advocates have been saying for years, which is that [the Maryland Department of Transportation] is not sufficiently investing in [the Maryland Transit Administration’s] capital infrastructure,” said Del. Brooke Lierman (D-Baltimore City).

“The Get Maryland Moving Coalition calls on Secretary [Pete K.] Rahn to respond to this report by taking action to meet the critical funding needs outlined for our transit system,” said Brian O’Malley, CEO of the Central Maryland Transportation Alliance.

The Hogan administration said the state is investing more than $14 billion in operating and capital funds for the Washington, D.C., region’s Metro system and the transit systems the state owns, a record sum.

“No governor in the history of the state has invested more,” said Michael Ricci, a Hogan spokesman. 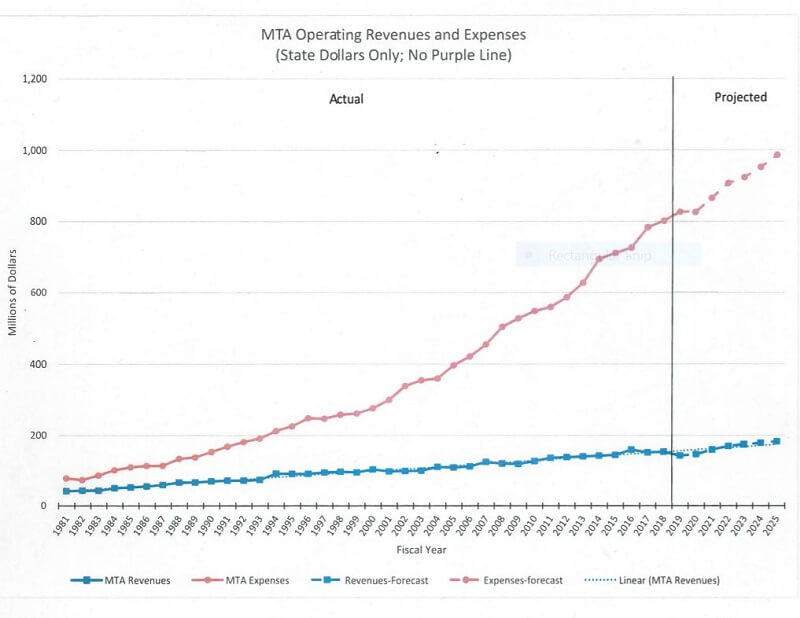 A chart provided by MDOT showed that the gap between transit needs and revenues dates back to the early 1980s, and that it began to grow significantly in the mid-2000s, long before Hogan took office.

Another chart showed that transit fares account for just 3 percent of agency revenues, even though transit takes 42 percent of MDOT’s budget.

Del. Marc Korman (D-Montgomery) accused Hogan of trying to have it both ways — proposing cuts to the gas tax, which the legislature rejects, then showing up at ribbon cuttings when the state funds new projects.

“This report is a reminder that his political approach to transportation has simply allowed the state to skate by,” Korman said Sunday. “But the bill will come due for roads, buses and trains, and we need to get serious about a collaborative approach.”

“I do expect the governor and our transportation secretary to come to the budget committees [next year] prepared to discuss how they are going to ensure that all of our assets are in a state of good repair,” she said in an interview Sunday. 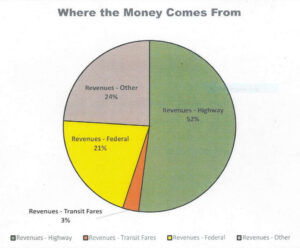 “Show us a plan so we can get going,” Lierman added. “It’s not responsible of government to defer necessary maintenance for years and years and expect our kids to foot the bill.”

In 2018, the General Assembly required MDOT to provide an assessment of MTA’s needs and expected revenues every three years. The requirement was contained in a measure to provide significant new funding for D.C.’s Metro system, for which Hogan offered key support.

Lierman accused MDOT of trying to hide the report from the public.

“It’s totally buried,” she said. “They released the report on a Friday afternoon, with no press release, with no notification, and buried it on a web page,” she said. “It just indicates that the governor and the secretary don’t want people to know how underfunded MTA is.”