Rep. Alexandria Ocasio-Cortez hit back at President Trump on Thursday night, proclaiming in a speech in Silver Spring that she and other newly elected female lawmakers have no intention of stepping back from policy debates — or returning to the land of their ancestors.

Speaking to a large, jubilant crowd of left-leaning activists in Silver Spring, Ocasio-Cortez borrowed language from the president’s recent, racially charged tweet, a post that has kept the New York Democrat and several of her colleagues at the center of intense media coverage for several days.

After name-checking the other members of “the squad” — the four freshman lawmakers targeted by Trump — the New York Democrat pledged the quartet intends to stand their ground.

“It has taken us 240 years for us to have this unique composite of a Congress in this moment — and we will not go back,” she said to sustained cheers and applause.

“We will go not back to the days of injustice,” she continued. “We will not give back our rights. We will not deny our own humanity at the border. We will not go back. … And we sure as hell will not stand still.” 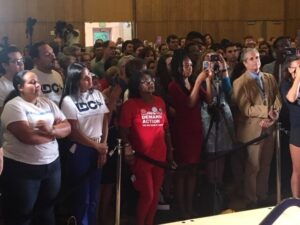 On Sunday, Trump on Twitter encouraged Ocasio-Cortez and three other freshman Democrats — Reps. Ilhan Omar of Minnesota, Rashida Tlaib of Michigan and Ayanna Pressley of Massachusetts — to “go back,” a presumed reference to the homeland of their ancestors. (Three of the lawmakers were born in the United States; Omar is from Somalia.)

Thousands of people who attended a Trump rally in North Carolina on Wednesday adopted the message, chanting “send her back,” as the president adopted a look of approval.

Ocasio-Cortez made her remarks at a rally organized by Rep. Jamie Raskin (D-Md.) to benefit Democracy Summer Maryland, a political organizing program for young people that the lawmaker began seven years ago when he served in the state legislature.

More than 700 people attended the event, which was held at the Silver Spring Civic Center. Some were turned away due to space constraints. Many of those who attended arrived early, despite intense heat, with the line stretching down the block and around the corner.

The big turnout and security presence were testimony to the strong following the former bartender from the Bronx has generated — and the element of curiosity that surrounds her.

Ocasio-Cortez said racism has been “newly emboldened in different ways — and it’s actually not about how just people of color respond to it, it’s about how our white friends respond to it, and how we come together to kind of dismantle it.”

Raskin and Ocasio-Cortez are chairman and vice chairman, respectively, of the House Oversight Subcommittee on Civil Rights and Civil Liberties, and they have bonded in their brief tenure together.

“I can tell you, she is going to be one of the great members of Congress of the 21st century,” he told the crowd. “And generations from now will come to study her career,” a reference to her surprise victory over a senior member of House leadership and subsequent rise to prominence.

The two were among 95 lawmakers — mostly Democrats — who voted not to table an impeachment article on the House floor on Wednesday. 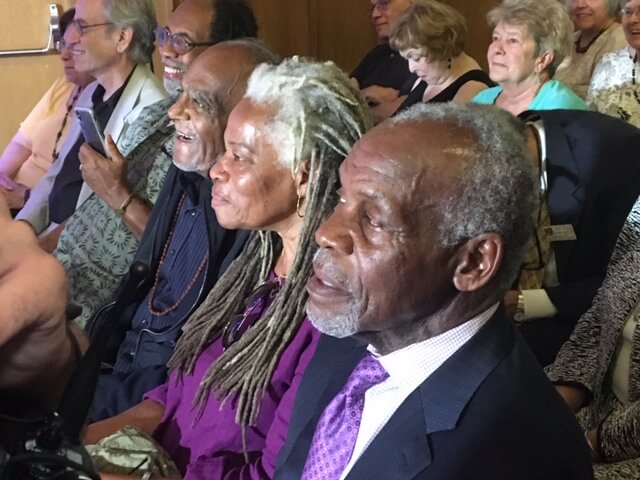 Raskin drew loud cheers when he denounced the president’s conduct.

“In democracy all of us who aspire and attain to public office are nothing but the servants of the people,” he said. “And the moment that we think we are the masters of the people and consort with Kings and princes and tyrants is the moment we should be evicted, ejected, unelected or impeached and removed by the people.”

People who attended the event were encouraged to contribute to the Democracy Summer training program, at which young people learn about political organizing, but tickets were provided free. 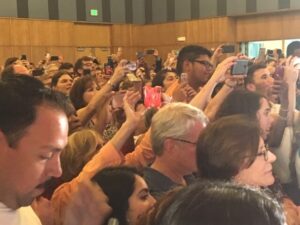 Ashley Vasquez, who hopes to pursue a career in politics, said Ocasio-Cortez “relates more to regular Americans than most of the people in Congress — and she beat out an incumbent, which is really hard to do.”

Ocasio-Cortez has 4.8 million followers on Twitter alone and is sought-after among even seasoned colleagues for advice on messaging and organizing. Her progressive views and sharp criticism of the president have created tensions with House Speaker Nancy Pelosi, who is working overtime to maintain unity in the Democratic Caucus.

Among those seated in the front row of the VIP section next to the stage were Robert Moses, a civil rights activist who helped lead the Student Nonviolent Coordinating Committee in Mississippi during the civil rights movement, and actor and activist Danny Glover.