There wasn’t much Keith Haller liked better than a hot day and a trip to the old ballpark.

Haller, the pollster, political strategist and community activist who died in December at age 70, couldn’t make it to the Bethesda Big Train game at Shirley Povich Field on Saturday night, but he was there in spirit. In fact, you might say he was the guest of honor.

And man, was it hot.

More than 50 of Haller’s friends and compadres showed up for a pre-game picnic, then watched Haller saluted by some of his best friends and greatest admirers during a pre-game ceremony on the field. 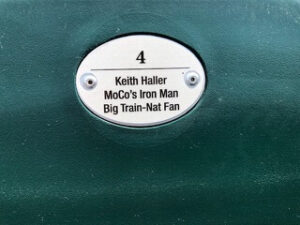 “Keith Haller was one of the great Big Train fans from day one,” said Bruce Adams, the former Montgomery County Councilman and co-founder of the team, which plays in the Cal Ripken summer collegiate baseball league.

Haller’s connection to Montgomery County civic affairs began during his years as the top aide to former U.S. Rep. Michael Barnes (D) in the 1970’s. From there, he built a polling and communications business – and became an integral part of the community.

Former U.S. Rep. Constance A. Morella (R) told the crowd of some of Haller’s good works – promoting hunger relief and arts programs, creating the World of Montgomery festival and the Best of Montgomery awards. He was also a co-founder of Maryland Matters.

“He had passion and compassion for the county and community,” Morella said.

“He was an idea person – just a fountain of information and ideas,” Adams said.

As he stood on the pitcher’s mound, preparing to watch his grandsons throw out the ceremonial first pitches before the game started – with Haller’s wife Stacy and son Michael nearby – Barnes reflected: “Keith Haller loved Montgomery County and he loved Maryland. And more than anything, I think, he loved baseball.”

Maryland’s new congressional map will likely produce the same 7-1 partisan breakdown as the previous map, an expert for the state said during a…

Thinking of Keith Haller as Committee for Montgomery Breakfast Approaches

The annual Committee for Montgomery legislative breakfast is a little like Christmas morning for hundreds of Maryland political players. They get up early for…

Analysis: A Change Is Gonna Come

As he agonized in recent weeks over whether to seek a third term in 2022, Attorney General Brian E. Frosh (D) told associates that…