Two months after a splintered House Democratic Caucus turned to Del. Adrienne A. Jones (D-Baltimore County) to become the next speaker, at least two lawmakers thought to be supporters of Del. Maggie L. McIntosh (D-Baltimore City) in the speaker’s race have been removed from key legislative positions.

The apparent retribution – which is coming from former supporters of Del. Dereck E. Davis (D-Prince George’s) in the initial race to replace the late speaker Michael E. Busch (D) – seems to be taking place without Jones’ knowledge or approval.

The moves have taken on a “Rashomon”-like quality around State Circle in recent days, with different people ascribing different motives to the major actors in the developments, depending on their perspective.

Two facts are indisputable: Del. Robbyn T. Lewis (D-Baltimore City) is out as secretary of the Legislative Black Caucus. And Del. Alonzo T. Washington (D-Prince George’s) has been removed as chairman of the education subcommittee in the Prince George’s County delegation.

Both Lewis and Washington, who are members of the black caucus, are assumed to have supported McIntosh for speaker over Davis — though neither said so publicly. McIntosh is white, while Davis is black.

While fissures were evident in the full Democratic caucus during the days leading up to the speaker vote, culminating in the caucus deadlock on May 1 that resulted in Jones emerging as the compromise candidate, they were particularly intense in the Legislative Black Caucus, which was largely divided along ideological and generational lines.

Ultimately, McIntosh wound up with 58 votes in the Democratic caucus to Davis’ 40 votes – with Davis racking up about two-thirds of the votes from his African-American colleagues. Seventy-one votes were needed on the House floor to be elected speaker — and Davis was threatening to enter into an alliance with the 42 House Republicans, who had backed his bid. Deadlocked, the Democratic caucus turned to Jones – who had dropped out of the race for speaker days earlier to endorse Davis – as the compromise candidate.

But while Jones has moved to unify the Democratic caucus since she became speaker – and will give the keynote address at the LBC’s annual summer unity breakfast on July 13 – there are clearly still hard feelings stemming from the race to replace Busch, who died on April 7.

In an interview with Maryland Matters this week, Barnes, who initially backed Davis in the race for speaker, said Lewis told him and Black Caucus Vice Chairwoman Edith Patterson (D-Charles) that she wanted to step down as LBC secretary because she was too busy to serve. 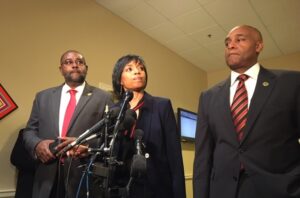 “I did not ask her to resign,” Barnes said. “She indicated to me and Del. Patterson that her time schedule has changed because of her commitment with her new job, as well as the activities that she is doing within her community. She said that she doesn’t have the time to commit [to being LBC secretary]. So I asked her to send me a letter of resignation so I could have that for the file. That’s a difference than me saying, ‘I want you to resign.’”

Lewis conceded that she did mention being pressed for time when she spoke with Barnes and Patterson. But she said that was “a convenient narrative” for explaining her motives for wanting to resign as Black Caucus secretary.

“The full, unadulterated truth is that as a result of the role the Legislative Black Caucus played in the speaker’s race, I felt, and still feel, very disconnected from the group,” Lewis said in a text to Maryland Matters. “When Delegate Barnes summoned me to Annapolis and asked me to resign, I did so because I could not in good conscience continue to serve on the executive committee given my feelings about the role of Black Caucus in the speaker’s race.”

Lewis said that in spite of her reservations, she will remain a member of the LBC.

“I still believe in the group’s purpose and mission,” she said.

“I asked her to stay involved,” he said. “I asked her to continue to be a part of the caucus because I value her leadership. Understanding the nature of the historic value of this speaker’s race, tensions were high, but now that it’s over, I believe that we have to unify and come together as a caucus.

“My job as the chair of the caucus is to try to bring people together, in understanding that we are somewhat fractured, but we are not divided.”

Barnes said he also planned to meet with Boyce in the near future and would urge her to return to the caucus.

Meanwhile, the repercussions from the speaker vote have trickled down to the Prince George’s County delegation, where the delegation chairman, Del. Michael A. Jackson (D-Prince George’s) recently removed Washington as chairman of the education committee.

“I was definitely removed for skepticism for who I supported in the speaker’s race,” Washington said in an interview. He declined to offer further details, except to say that Jackson was within his right to do so.

“It’s the will of the chairman,” Washington said.

“It’s a lot of drama,” Washington said. “I’d rather not go down that road.”

Jackson did not respond to an emailed request for comment Tuesday. Like many lawmakers’ offices during the interim, his Annapolis office was unstaffed on Tuesday.

Some legislators are wondering if other members of the Prince George’s delegation who are thought to have been in McIntosh’s camp could be in for punishment.

Jones, who is traveling around the state meeting with lawmakers individually and in groups, had dinner two weeks ago with the Prince George’s delegation at a Copper Canyon restaurant in Glenarden.

There, according to several Annapolis sources, Jones urged her colleagues to put the speaker’s fight behind them.

“We are moving forward into 2020 united,” she said, according to one person who attended the dinner. The speaker added, several times for emphasis, “Catch my drift?”