In a move that was instantly hailed as a “seminal moment” for Maryland’s horse industry, the company that owns the Preakness Stakes and the state’s two most high-profile tracks announced on Thursday that it has entered a new phase of negotiations to keep the race, the middle leg of racing’s Triple Crown, at Pimlico Race Course in Baltimore.

The commitment to try to keep the 144-year-old race in the city represents a significant shift for the Stronach Group, the Toronto-based firm that owns Pimlico, Laurel Park and the Preakness. Of late the company has been devoting the bulk of its resources to Laurel, having told state officials that its long-term plan was to make the Anne Arundel County facility a “super-track” and to move the Preakness there.

The announcement that Stronach, the city and others involved in Maryland racing would try to keep Pimlico afloat was made by Alan M. Rifkin, a prominent Baltimore-based attorney who is representing the company, at the monthly meeting of the Maryland Racing Commission.

“It’s a challenge, but a challenge I think we’re up to meet. We’re optimistic that we can meet it.”

The company’s decision to try to reinvigorate the aging West Baltimore track, which now has live racing just 12 days a year, follows Mayor Bernard C. “Jack” Young’s decision to withdraw a lawsuit against Stronach that was filed by his predecessor, Catherine E. Pugh.

As Rifkin spoke, he was flanked by William H. Cole IV, former chairman of the Baltimore Development Corp., and Alan Foreman, counsel for the Maryland Thoroughbred Horsemen’s Association and a national expert on racing.

Those men and a fourth, new BDC President Colin Tarbert, who wasn’t present, were described as the “designated negotiators” on the thicket of issues that has led to the decline of racing in Baltimore and the push to move the Preakness to Laurel. 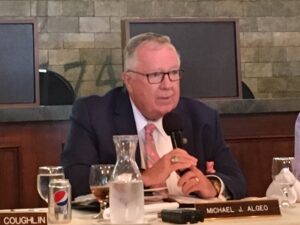 “We have a crisis in the industry. I don’t think anybody’s running away from that,” he said. “I think the future of the Maryland horse industry depends upon us working together.”

Pimlico, which was built in 1870, is in need of extensive renovation. Because of the sport’s decline, there has been a reluctance to pump money into the facility. But without it, deterioration has continued to take its toll.

Algeo told Tim Ritvo, Stronach’s chief operating officer, that he got an earful of complaints from fans who found this year’s Preakness to be disappointing because of issues with the venue, like bathrooms that weren’t functioning.

Ritvo called the structure “ancient” and offered an apology to fans who left unhappy, pledging to make upgrades in time for next year’s race.

While he is optimistic that the new negotiations will be fruitful, Algeo acknowledged in an interview that there is much work to do.

April Smith, who is active with the group Friends of Pimlico, welcomed the renewed negotiations, calling them “wonderful news.”

“This 12-day spring meet is an insult to the history and tradition of Pimlico,” she said. “I know tons of people who would like to come. I think if we advertised we could have a decent two-month spring meet.”

Del. Nick J. Mosby, a Baltimore City Democrat who attended the commission’s meeting on Thursday, urged the panel to continue to press for improvements in the housing facilities used by track workers, which have been found to be substandard in the past. And he pledged to continue to monitor the flow of funds from a state racetrack investment account, which of late have favored Laurel over Pimlico.

Mosby said pressure from the legislature was a factor in the decision of industry groups to come together, as were comments from former Maryland Jockey Club CEO Joseph De Francis, who warned in a recent Maryland Matters interview that moving the Preakness to Laurel could be “catastrophic” to the state’s sprawling racing industry.

“I thought his statements were dead-on, and I think that a lot of folks feel that,” Mosby said.

Rifkin told the commission that negotiating partners have been talking regularly, sometimes multiple times a day, to resolve long-term issues.

In an interview, Rifkin said, “It’s the first time that I can remember — and I’ve been involved in the sports industry in Maryland for 35 years — such a degree of optimism, cooperation, and true goodwill to try to hammer out a solution to a very difficult problem.”

Federal Judge Rejects Mosby’s Motion to Dismiss Charges Against Her

As Democrats prepare to retake power in Annapolis, Hogan issues warning on spending