The Democratic presidential debates are almost upon us. Be afraid. Be very afraid.

Not because these are a bad lot of candidates or because they have unappealing messages. But the debates themselves, spread out over Wednesday and Thursday nights, are not a great showcase for these candidates or for the Democratic Party as it works to defeat President Trump.

With 10 candidates on the stage each night there simply isn’t the time to get substantive or meaningful answers in a format that demands brevity and sound bites. And the ensuing media coverage – oy!

What will be spotlighted in the immediate aftermath of the debate are memorable one-liners, gaffes, skirmishes, and lines of attack.

Will Biden and Bernie go after each other? Will generational and ideological fault lines that threaten to erode Democratic unity heading into the 2020 general election be on visible display? Will lesser-known candidates’ desperate attempts to be noticed pay off, or will they result in total embarrassment?

And Trump reportedly plans to live-tweet his reaction to the debates. God help us all.

In January, I asked a leading national Democratic pollster what he thought of the emerging presidential field. He answered, “If you’re not Bernie, Biden, Elizabeth Warren or Kamala Harris, you’re not really running for president.”

Well, that seemed like an over-simplification then and it does now, too. But it has a certain logic.

The four candidates the pollster mentioned are leading most national surveys, and South Bend, Ind., Mayor Pete Buttigieg has shot up into the top tier as well. And there could still be a couple more breakout candidates this week.

But polls, money, and grass-roots support will dictate who gets to participate in subsequent Democratic debates, and it’s entirely likely that the field will be cut in half by year’s end. Even then, that’s a pretty unwieldy number of candidates.

The stakes this week are high for a couple of Marylanders.

There’s former congressman John K. Delaney, waging a self-funded but long shot campaign for the White House. He’s a smart and thoughtful guy, but he’s among series of middle-age white dudes mired way down in the polls. His early start and his willingness to spend cash may help him a little at the grass-roots level in Iowa and New Hampshire, especially compared to other long-shot contenders, but it’s still hard to see how he breaks through. His gambit of going after Bernie Sanders will be hampered by the fact that they won’t be on stage together this week.

Marylander Tom Perez, the Democratic National Committee chair, also has a lot riding on this week. 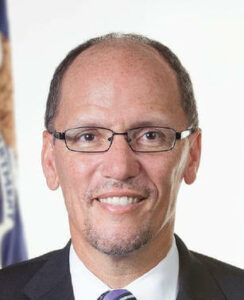 The ultimate measure of Perez’s success will of course come on Election Day 2020, but already there has been some grumbling about the way the party is being run. That’s inevitable: leading a local, state, or national political party is a thankless job.

But I was struck by an article in Politico last week that pointed out an undeniable flaw in the DNC debate rules. As the article noted, “The Democratic National Committee chairman is the face of presidential debate rules that will allow a meditation guru to take the stage next week while a red state Western governor watches on TV.”

At a minimum, that can’t help the Democrats take back districts that swung from Barack Obama to Donald Trump in 2016.

The Maryland Democratic Party is hosting debate-watch parties around the state on Wednesday. Click here for the full list. The District 17 Democratic Club, which covers Rockville and Gaithersburg in Montgomery County, has a debate watch party scheduled for Wednesday at the Grape Escape, 223 Kentlands Blvd. in Gaithersburg.

Maryland for Elizabeth Warren is organizing a debate watch party at Denizens Brewing Co. in Silver Spring, 1115 East West Highway. And the group Progressive Neighbors will be watching the debate at Busboys and Poets, 235 Carroll St. NW, Washington, D.C., just across the line from Takoma Park.

Maryland’s own presidential primary is 10 months down the road, and who knows if it will be relevant at that point (the answer could have a profound impact down ballot, in Baltimore City and, potentially, congressional primaries). Maryland’s political community is watching the developments carefully, but there isn’t a ton of presidential activity here yet – in part because there are so many candidates that Democratic stalwarts like.

“People are all over place,” Susan W. Turnbull, the former state Democratic chair and 2018 nominee for lieutenant governor, told me.

The pace will probably accelerate closer to the Jan. 24 candidate filing deadline, as Democratic politicians and activists gear up to run to be delegates at the Democratic National Convention in Milwaukee.

Sanders’ campaign in Maryland is anchored by Our Revolution Maryland, which is full of savvy progressive warriors.

The hometown candidate, Delaney, has been endorsed by the man who succeeded him in Congress, U.S. Rep. David J. Trone (D), and Terry Lierman, the former state Democratic chair, is Delaney’s national co-chair.

Sen. Jill P. Carter (D-Baltimore City) has tweeted her support for Marianne Williamson, the activist and author of healing and self-help books. “I’m banking on her rising after the debates which she will own!” Carter tweeted earlier this month.

Foxwell’s boss is uncommitted, but sources close to Franchot say he is impressed with California Sen. Kamala Harris (D).

But the attitude of Maryland Democrats may best be summed up by Attorney General Brian E. Frosh (D). Asked through a spokeswoman whether he had given any thought to who he might vote for, he replied, “Yes! A Democrat.”

Are there other “name” Maryland Democrats lining up to support presidential candidates? Please let me know.