A flag with a red border and blue star is hung proudly at the entrance of the state Senate building in Annapolis.

While the flag is usually displayed in front of a home when a family member is serving in the Armed Forces, this, perhaps, is the best way to symbolize the camaraderie of the Maryland General Assembly as one of their own is deployed overseas.

Since Sen. William C. Smith Jr. (D-Montgomery) was deployed to Afghanistan in March, his colleagues have put together several care packages with Maryland-themed items and souvenirs from their respective counties and districts, so he has a piece of home while he is away.

In a bipartisan effort, spearheaded by Sen. Douglas J.J. Peters (D-Prince George’s), regions of the state will send out boxes with individualized items, such as Baltimore Ravens and Orioles gear or crab products from the Eastern Shore, along with personal notes once a month until Smith’s expected return around the end of the year.

Senators from the Washington, D.C., region, which includes Montgomery and Prince George’s counties, sent packages first, featuring two boxes with Washington Redskins and Nationals merchandise in mid-April. Another box was sent in mid-to-late May and the next box, from Howard County, is scheduled for mid-June.

“It’s something we should be doing,” Peters said of the legislators’ support for their colleague. “In the beginning when you first get sent off, there’s…parties and good luck and all that kind of good stuff. And then when you come back, there’s this huge welcome. But in between there is a lot of, a lot of lonely time.”

Peters said his own experiences motivated him to organize these care packages. He served in Saudi Arabia as an Army Reservist during Operation Desert Storm in 1990-91. “I was almost in the exact same position as well…getting a letter, getting a package was just so uplifting or me.”

Smith, an officer of the U.S. Navy Reserve and the Senate chair of the legislative Veterans Caucus, is serving in Operation Resolute Support. Peters, who held the position before Smith, will chair the caucus in his absence.

Smith’s wife, Camille Fesche, a lobbyist in Annapolis, said the care packages are “an incredibly thoughtful idea and incredibly meaningful to me and the senator.”

She also said that not only is Smith “absolutely delighted” by the packages, the efforts have been beneficial to her as well, as she navigates being a single parent to their one-year-old daughter, Jacqueline.

“I’ve been really inspired by the support that I’ve personally received and I’ve really appreciated senators and other people in the political sphere reaching out to me,” Fesche said. “I really feel supported and I really feel that the community is rallying around well while he is serving his country.”

In Smith’s absence, his staff has continued to help constituents and monitor legislative developments and community affairs.

Constituent service remains the number one priority, said Luke Pinton, Smith’s chief of staff. He, along with legislative aide Janai Woodhouse, are “fielding calls from constituents, dealing with issues and trying to be as helpful as we possibly can.” 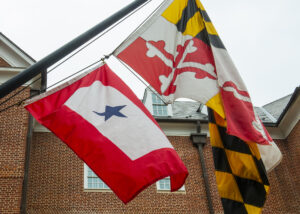 An Armed Services flag hangs next to the state Senate building in Annapolis. Photo by Allison O’Brien

When Brown returned to Maryland in 2005, at the age of 43, he was a hot political commodity, and dozens of top-flight political leaders flocked to a community block party in his honor when he returned from Iraq. As Brown pondered a range of political options, he was selected to be Martin G. O’Malley’s running mate a few months later, and was elected lieutenant governor in 2006.

Smith, who is 37, did not respond to an email requesting an interview.

Smith’s political team is planning a community fundraising event — tentatively scheduled for September in downtown Silver Spring — to support Smith during his deployment and his 2022 campaign for reelection, according to Stephanie Binetti of Binetti Political Strategies.

Binetti said the purpose of the event, which is still in its early stages of planning, is to show that “we’re still here serving his constituents and his community.”

“We want to make sure that Sen. Smith stays visible,” Binetti said.