The U.S. House on Tuesday passed a bill that aims to give up to 2.5 million undocumented immigrants a pathway to U.S. citizenship.

The legislation – a top priority for House Democrats – would offer protections for undocumented immigrants who were brought to the United States as children and others who are currently without permanent legal status.

H.R. 6, called the “American Dream and Promise Act,” passed on largely partisan lines by a vote of 237-187. All seven Maryland Democrats voted for the measure, while the state’s lone Republican, Rep. Andrew P. Harris, voted against it. In all, seven Republicans broke ranks to side with Democrats to support the bill.

The vote comes after the Trump administration announced plans to end an Obama administration program to protect young immigrants – known as “dreamers” – from deportation.

The House legislation would also offer a pathway to citizenship for immigrants with temporary protections, known as Temporary Protected Status (TPS) and Deferred Enforced Departure (DED).

“Protecting Dreamers and TPS and DED Americans is about honoring the respect for family that is at the heart of our faith and who we are as Americans,” House Speaker Nancy Pelosi (D-Calif.) said at a news conference ahead of the vote. “There should be nothing partisan or political about this legislation.”

Maryland is home to 63,900 immigrants who are eligible for protection under the Dream and Promise Act, according to an analysis by the Center for American Progress. Those eligible immigrants and their households contribute $576.4 million in federal taxes and $325.4 million in state and local taxes each year, according to CAP, and their households generate more than $2.2 billion each year in spending power.

CASA, the largest member-based Latino and immigrant organization in the Mid-Atlantic region, which is based in Maryland, had dozens of members in the House gallery for Tuesday’s vote. 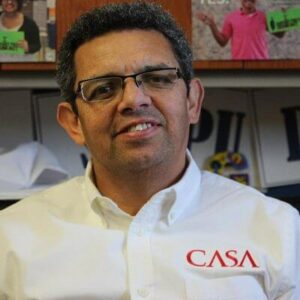 “We are living in a period of nativist tyranny emanating from the White House, burdened by a Republican Party that has zero moral compass,” said Gustavo Torres, CASA’s executive director. “Thankfully, Democratic legislators stood up for their constituents in passing a bill that reflects our values as a people.”

Among those watching the vote was Gaby Hernandez, a DREAMer from Prince George’s County, who was recognized from the floor by her congressman, House Majority Leader Steny H. Hoyer (D-Md.).

“While what happened today is not final relief, it was thrilling to see so many legislators stand up for my family, my life, and my future,” said Hernandez, who is currently attending college. “We have spent countless hours talking with our neighbors, organizing actions, and speaking with legislators. Today was the result.”

In previous years, legislative efforts to grant protections to undocumented immigrants who entered the country as minors have been bipartisan. But this effort appears unlikely to gain support in the GOP-controlled U.S. Senate, given the partisanship that currently defines the immigration debate.

Many House Republicans warned that Democrats were wasting their time on legislation that’s dead on arrival in the Senate, while others warned that it encourages immigrants to break the law.

“H.R. 6 provides nothing for border security, and yet it allows a pathway to citizenship for criminals and dangerous gang members,” Harris said in a statement. “If Democrats were serious about fixing the humanitarian crisis along our southern border, they would stop wasting their time investigating the president and cooperate with Republicans to fix our immigration crisis.”

The White House has issued a veto threat against the bill.

The Maryland State Board of Elections has announced some important administrative dates and key activities as Election Day approaches.