Only one congressional Republican has publicly called for President Trump’s impeachment, enraging his colleagues and invoking the wrath of the president by offering the campaign to boot Trump the stamp of bipartisanship.

Rep. Justin Amash (R-Mich.) isn’t the first congressman in history to publicly call for the ouster of his party’s president in the heat of an impeachment debate.

One of the most famous was Rep. Lawrence J. Hogan Sr. —  a Maryland Republican and the current governor’s father, who turned on President Nixon during the 1974 House impeachment proceedings.

Hogan, who was then in his third term representing Maryland’s 5th District, became the first Republican on the House Judiciary Committee to publicly call for Nixon’s impeachment.

Whereas Amash dashed off his formal denunciation of Trump in the form of a lengthy Twitter thread, Hogan declared his rebellion the old-fashioned way, with a much-hyped news conference inside a media room packed with dozens of reporters and photographers.

“Not since Spiro Agnew got caught with his hand in the till has any Maryland politician received this much national attention,” one reporter joked at the news conference, Village Voice reporter Ron Rosenbaum wrote back in 1974.

Rosenbaum described Hogan’s announcement as “the biggest single event of the impeachment circus so far, perhaps the first and last moment of genuine suspense and surprise.” With his credentials as an ex-FBI agent and a conservative Republican, “Hogan’s pro-impeachment vote makes it possible for conservatives of both parties to vote to defend a pro-impeachment vote as a law-and-order vote.”

Hogan said Nixon had “lied repeatedly” about Watergate, interfered with investigators and tried to use the CIA to obstruct the FBI’s inquiry. “Unless Richard Nixon is removed from office and the disease of Watergate, which has sapped the vitality of our government, is purged from the body politic, government and politics will continue to be clouded by mistrust and suspicion,” Hogan said at the time, according to the Sun.

His announcement was followed by predictions that as many as seven of the Judiciary Committee’s 17 Republicans might vote for impeachment, according to the newspaper.

Ultimately, in late July of 1974, seven of those GOP committee members did indeed vote for at least one of the three articles of impeachment that the panel passed. Two other impeachment articles, on Nixon’s taxes and the bombing of Cambodia, failed, and every Republican opposed them.

Hogan was the only Republican to vote for all three articles that passed. Nixon resigned on Aug. 9, 1974, before the full House voted on impeachment.

His father’s open rebellion against Nixon is a point of pride for Gov. Hogan, who often cites the episode during his own political speeches.

“Despite tremendous political pressure, he put aside partisanship and answered the demands of his conscience to do what he thought was the right thing for the nation that he loved,” Hogan Jr. said this year in his second inaugural address. His father died of complications from a stroke in 2017 at age 88.

Gov. Hogan says his father’s vote on impeachment “cost him dearly. He lost friends and supporters and his party’s nomination for governor that year.”

Hogan Sr. was criticized at the time by Nixon’s White House counsel and House Republicans for using his support for impeachment to boost his bid for the governorship; Hogan suspected it would hurt his campaign. He lost in the 1974 Republican primary to Louise Gore. She lost the general election that fall to the Democratic incumbent, Marvin Mandel.

Hogan Sr. later recalled how he received about 15,000 letters — some addressing him as “Benedict Arnold” Hogan and “Judas” Hogan. He was even mailed packages of feces, the Sun reported.

But, Hogan Jr. said in his inaugural address that despite the losses, “it earned him something more valuable: a quiet conscience and an honored place in history.”

Gov. Hogan, of course, flirted with idea of a presidential run against Trump until announcing Saturday that he would forgo a challenge and would instead launch a national 501c4 organization dedicated to promoting problem solving and bipartisanship [see related story]. He has said that he’s troubled by the findings of Special Counsel Robert Mueller’s report.

“There was some very disturbing stuff found in the report,” Hogan said, according to the Sun. “Just because aides did not follow his orders — that’s the only reason why we don’t have obstruction of justice.”

Hogan’s office did not respond to requests for comment for this story.

Amash is also considered a possible White House contender in 2020, recently refusing to rule out a third-party challenge to the president.

While the impeachment calls from Hogan Sr. and Amash both generated a flurry of headlines, they are different in some key respects.

For one thing, Amash doesn’t sit on the Judiciary Committee, the first panel to see impeachment action in the House and one with tremendous sway over the proceedings. 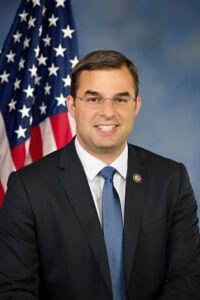 While Hogan was a Nixon loyalist up until then, Amash — a libertarian with a fiercely independent streak — has openly fought with House GOP leadership and publicly sparred with Trump plenty of times before.

And so far, the Michigan Republican’s announcement hasn’t budged a single GOP colleague to openly join the push for impeachment.

The timing was vastly different, too. Hogan’s announcement came just days before the House voted on articles of impeachment; House Democrats are still wrangling with whether to even pursue an impeachment “inquiry,” although members of the caucus are increasingly clamoring to take that route.

Former Rep. Elizabeth Holtzman (D-N.Y.), who served on the House Judiciary Committee with the senior Hogan during the Nixon impeachment proceedings, called Amash’s position “a sign of courage on his part,” but also a reflection of the fact that he has read the full Mueller report.

She recalled how the presentation of the facts after the Watergate scandal shifted Republicans’ positions about Nixon. At the beginning of the process, “I wouldn’t be at all surprised if all of [the Republicans on the Judiciary Committee] were not at a minimum skeptical and at a maximum totally opposed” to impeachment, she said.

Every member of the committee had to hear all the factual statements read out loud, she said. And there was “a huge number of facts,” in that case. “I remember feeling as though I was sinking into quicksand and I’d never hit bottom.”

Holtzman said it’s now incumbent on Congress to present the main factual findings of the Mueller report through live witnesses. “That is vital,” she said.