As members of the House of Delegates were struggling to choose a successor to the late speaker Michael E. Busch (D) a month ago, someone was watching closely from the New Jersey state capitol in Trenton, 158 driving miles from Annapolis.

New Jersey Lt. Gov. Sheila Oliver (D) knew many of the lead actors in the Maryland drama from legislative conferences and other national political events. But when Del. Adrienne A. Jones (D-Baltimore County) became the consensus compromise candidate to replace Busch, Oliver really began to pay attention – and she was as surprised as everybody else.

“It was so interesting because Adrienne Jones had withdrawn from the race a few days earlier and then emerged as speaker,” Oliver mused in a phone chat this week.

Oliver’s interest in Jones’ success? She was the second African-American woman speaker of a state House in the U.S., leading the New Jersey state Assembly from 2010 to 2014.

“It said a lot about how her colleagues regarded her,” Oliver said of Jones’ unanimous election. “She’s going to need that kind of support if she’s going to be successful.”

In an interview with Maryland Matters, Oliver told her story and offered Jones some practical advice.

It’s clear that there are plenty of parallels between the two women and their careers. In fact, there are parallels between Oliver and Jones and the first African-American woman who was a presiding officer of a state House – U.S. Rep. Karen Bass (D-Calif.), who led the California state Assembly from 2008 to 2010. 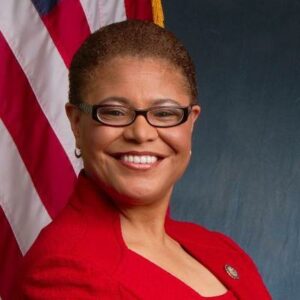 For starters, they are of the same generation: Jones is 64, Bass is 65 and Oliver is 66. All had leadership positions in their legislative chambers before ascending to the top job.

“I had cultivated relationships with fellow legislators for years,” Oliver said.

And by coincidence, all served as speaker opposite a Republican governor who was considered a little outside the GOP mainstream: Bass’ tenure – limited to two years because of term limit laws for state legislators in California – overlapped with the final two years that Arnold Schwarzenegger was governor. Oliver’s tenure coincided with the first term of New Jersey Gov. Chris Christie. And now Jones is serving with Gov. Lawrence J. Hogan Jr. – who considers Christie a mentor and is an ally of Schwarzenegger’s on redistricting reform.

The similarities between Jones and Oliver go deeper. Both were high-ranking staffers in their county governments: Jones held a variety of posts in Baltimore County government before retiring, while Oliver rose to be assistant administrator in Essex County, N.J. – a position she held until becoming lieutenant governor last year.

(Bass, whose office did not make her available for an interview, worked in the advocacy and nonprofit world in Los Angeles before entering the legislature. Bass, who is now president of the Congressional Black Caucus, met with Jones during an event on Capitol Hill earlier this month.)

“Between Christie and Sweeney, I used to say I was the rose between two thorns,” Oliver joked.

But there is one big difference between Jones and the other two women: All previous 106 speakers of the House in Maryland have been white men.

In New Jersey, a white woman and black man each served as Assembly speaker for a year – in 1965 and 1974, respectively. And in California, two African-American men preceded Bass as speaker, including the legendary Willie Brown (D), who served for 15 years, before there were term limits. A white woman, Republican Doris Allen, served as speaker for a brief three months in 1995, during a period of power struggles and instability in Sacramento.

Now that Jones has become speaker, Oliver suggested two things that she should do immediately: Travel around the state to members’ districts and meet with as many constituency groups as possible. Visiting individual districts, Oliver said, “is the most important thing,” because it allows the speaker to understand her colleagues’ priorities and see what their constituents need.

As it happens, Jones is starting to do just that.

Oliver suggested that taking over during the interim will be a mixed blessing for Jones when it comes to consolidating power. On the one hand, Jones will have time to settle into the job and meet with as many people as she can. On the other hand, it is easier to assert control quickly when the legislature is in session – and unless there is a special session in Annapolis to address congressional redistricting, the General Assembly won’t convene again until next January.

Though it’s technically a part-time legislature, as Maryland’s is, in New Jersey lawmakers are in session for six full months, committees meet all summer, and the legislature occasionally goes back into session in the fall.

“That provides a great opportunity for a speaker in New Jersey to get things done, because we have a captive legislature from January to June,” Oliver said.

Oliver described her “Napoleon moment” as working on a compromise with Christie to change pension benefits for state government workers – a policy that was anathema to the labor unions and progressive groups that were her natural allies. If those reforms hadn’t been made, Oliver argued, state and local governments would have had to make drastic layoffs, and newer government employees may have gotten no pension benefits at all.

But she paid a political price for the compromise — surviving a coup attempt and then spending her final four years in the legislature as “speaker emeritus,” rather than wielding the gavel. She also finished a distant fourth in a special Democratic primary for U.S. Senate in 2013 — an election won by then-Newark mayor Cory Booker (D).

“People will scream at you and the whole nine,” Oliver said. “But you’ll get over it. You’ll live.”

And then there was the inevitable sexism.

Oliver recalled that she would get exasperated convening meetings “and only seeing Navy and black suits.”

“Although I had the majority vote in 2010, I believe there was skepticism in the legislature when I became speaker, especially among men,” she said. “There were many members of the legislature who underestimated who I was and what my capabilities were.”

But the main thing Oliver came to learn is that being the presiding officer of a state legislative body is a very powerful job.

“When I look back and reflect, I think often, ‘we don’t recognize the power of the position,’” she said. “Tell Speaker Jones not to be afraid to use that power and position.”