A dead sparrow lay on the walkway to the Verso Paper Co.’s administrative building in rural Luke, Md., Tuesday afternoon.

It was a grim metaphor – a reminder that the paper mill, a major employer in Western Maryland and West Virginia – plans to suspend production on Friday and shut down operations a few weeks later, after a 131-year run.

The looming closure of the Luke paper plant, announced April 30 with no warning, and then accelerated by a month, brought several key members of Republican Gov. Lawrence J. Hogan Jr.’s cabinet to Allegany County on Tuesday. They were there to meet with elected officials, company executives, union leaders, and workers to tell them that the state is doing everything it can to help.

“I think the main message from today is, you have a group of people who are very committed to this community,” said state Commerce Secretary Kelly M. Schulz as the group gathered in a conference room at the Allegany County government building in Cumberland. 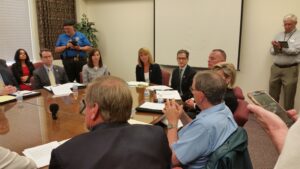 The company’s announcement that it would shutter the mill caught everyone by surprise. Not that people didn’t have some inkling.

Last December, the mill was down for 10 days, because the market for the glossy magazine-style paper that is produced there was low, company officials told United Steelworkers Local 676, which represents more than 500 workers at the plant. But the company assured the community the mill had a bright future and that investments were being made to upgrade and update equipment, and the union ratified a three-year contract with Verso for the Luke plant and two others, in Michigan and Wisconsin.

Just a few weeks later, Verso announced its plan to abandon Luke, and said 675 workers would “be impacted” by the closure.

“The continuing decline in demand for the grades of paper manufactured there left us no choice but to close this facility that has struggled with profitability for a number of years,” Lederer said. “The company explored the possibility of producing alternate grades of paper products but the conclusion remained the same – we could not achieve profitability at the mill in today’s market environment.”

Lederer said the decision to close the Luke mill was “in no way a reflection on the dedicated men and women who work there. We know that this will be an extraordinarily emotional and challenging time for our Luke Mill team, and Verso is committed to treating them with fairness, respect and dignity during this difficult time.”

‘It’s going to be eerily quiet’

The paper mill, a huge industrial complex alongside the Potomac River with a smokestack several stories high, dominates the landscape of Luke, a town of just a few dozen people living in ramshackle wooden houses built into dramatically steep hills. An ever-present industrial hum emanating from the plant overpowers the town. That will be going away in a matter of weeks.

“It’s going to be eerily quiet,” said one local. “People are going to be woken up by crickets.”

Hogan reached out to company executives by phone as soon as he learned of their decision to shutter the plant, but could not persuade them to change their minds, officials said.

Within days, Maryland officials and members of the state’s congressional delegation, including Sens. Benjamin L. Cardin (D) and Chris Van Hollen (D) and Rep. David J. Trone (D), traveled to Luke and the surrounding community. By mid-May, the state and local governments convened a job fair for the workers who were about to be displaced. About 70 companies sent recruiters, and another will take place in mid-June.

Schulz, the state Commerce secretary, said government officials are trying to help the company find a buyer to take over the plant; the company, she said, has hired a consultant to identify and talk to potential buyers.

Schulz said she was bound by a non-disclosure agreement from talking about prospective buyers, but allowed that the state has been in touch with “about a dozen or so” companies.

But mystery shrouds the company’s short-, mid- and long-term plans. It is unclear whether those prospective buyers would want to keep the plant producing paper, or keep the adjacent pulp plant open, or buy the heavy equipment in the plant, or put an entirely different kind of industrial operation inside.

“All you hear are rumors,” said a man who did not want to be identified standing in the visitor parking lot across the street from the mill, wearing a yellow safety vest and white hard hat.

Company officials and union leaders have been conducting negotiations in a Holiday Inn Express in LaVale, 20 miles from Luke, for the past few days, and those will continue this week. Among the topics under negotiation are the size and duration of severance payments, how long the company will offer insurance benefits to the displaced workers, and whether any purchaser of the plant will be obligated to hire a union workforce.

James E. Rzepkowski, the state’s acting secretary of Labor, said that state officials have appealed to the U.S. Department of Labor to rule that the plan closure was due in part to trade practices that disadvantaged the workers at Luke. Allegany County officials told Maryland Matters Tuesday that several countries, including Indonesia, China and Finland, have entered the U.S. market with the same type of paper, used for magazines, catalogues and brochures, that are produced in Luke.

A favorable ruling from the federal government will result in an extended severance for workers along with extra benefits for training and education, Rzepkowski said.

But before they can accept and begin new jobs, most of the plant’s workers are obligated to be on call for another month or two, as they help the company suspend operations.

Water and sewer service in jeopardy

The plant closure has other implications for the state and region. For starters, the mill provides all the water and sewage service for the town of Luke. State officials believe they have an agreement with the company to provide drinking water through November 2020, and wastewater treatment service for at least a few months more. But they concede that they are looking for answers.

The Maryland Department of the Environment “is looking very carefully at these concerns,” said state Environment Secretary Ben Grumbles.

And while it is controversial among environmentalists, some of the byproduct from paper production, known as black liquor, counts toward the portfolio of renewable fuels that Maryland electric utilities use to meet clean energy standards. In an interview, Grumbles said black liquor represents a substantial portion of the renewable energy utilities must-buy, but he did not know the exact percentage. Luke is the only paper plant in Maryland, meaning utilities will have to obtain black liquor from out-of-state producers.

“It’s another reason why the governor is committed to expanding home-grown green energy,” Grumbles said.

The economic impact of the plant closure ripples out throughout Western Maryland and the rest of the state. That’s evident by the steady stream of logging trucks zooming through the roads in and around Luke – even with the plant closing later this week.

There are dozens of industries and businesses that feed off of the plant and its product. State Sen. George C. Edwards (R-Garrett), said he has been in touch in recent days with more than 200 loggers – based in Maryland, West Virginia and Pennsylvania – whose businesses will be hit drastically by the paper plant shutdown. He said he was also recently speaking to the owner of a paper pulp company in St Mary’s County who relies on the operations at Luke.

The public library in Westernport. Photo by Josh Kurtz

Edwards noted with some irony that some of the imported paper that comes into the U.S. to compete with what’s being manufactured in Luke is shipped through the Port of Baltimore.

While they’re still stunned by recent developments, locals are trying not to despair. But they can’t help being nervous.

“It’s been awfully drastic awfully fast,” said an administrative worker at the plant who did not want to be named, interviewed on the street in Westernport, the larger town next door to Luke, with a population of close to 2,000.

Signs in the window of the public library in Westernport, and at a strip mall down the block from the United Steelworkers union hall, say “Luke Mill Strong.”

About a third of the plant’s workforce lives in Allegany County, a third lives in Garrett County, and most of the rest live in West Virginia.

Del. Jason C. Buckel (R-Allegany) calls the plant closure “an inflection point – one of many that have occurred in the past 20 to 30 years in Western Maryland.”

Buckel said the developments in Luke are another reminder to local leaders that while the natural resources in Western Maryland are similar to nearby West Virginia’s and Pennsylvania’s, Maryland cannot replicate their economies.