Howard County Executive Calvin Ball (D) acknowledged on Monday that the flood-reduction plan he has chosen for Ellicott City was one of the priciest of the five options available to him.

But after two devastating floods in a two-year period — and a fear that more damage to the historic downtown area was inevitable — he said he had little appetite for any approach that didn’t make the community safer.

The twin Ellicott City disasters are often held up as Exhibit A of the devastating impacts of climate change in Maryland.

The plan Ball chose calls for the construction of a tunnel and several stormwater management ponds, along with the expansion of existing, aging culverts that run under the town’s historic Main Street.

Together, he and other county leaders said, the improvements will help keep water from further damaging Ellicott City’s quaint shops and restaurants, some of which go back to the 1850s.

“This plan tries to retain water in the upper parts of the watershed, improve the conveyance through the watershed, and then — when we get down to Main Street — it diverts the majority of the flow of the Hudson Branch away from lower Main Street by taking it through a tunnel and then exiting out into the Patapsco River,” said Mark DeLuca, deputy director of the Howard County Department of Public Works.

The price tag for the five-year project is estimated by county officials at between $113.5 million and $140.5 million.

At a news conference Monday – following two days of heavy rains – Ball acknowledged the steep price tag, but he said the public comments the county received over the last year convinced him of the need for a bold solution. 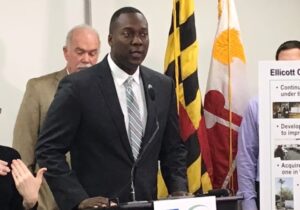 “This is the best plan available to move with a sense of urgency, prioritize public safety and be the model of resilience,” he said.

Ten properties on lower Main Street — including a restaurant, an art supplies store and a glass studio — will be acquired by the county, Ball said. Four will be retrofitted to make them flood resistant and then made available again for retail use.

Ellicott City was hit with major floods in July 2016 and May 2018. Some of the businesses that suffered damage in those events did not re-open.

Among those who stayed, many said they were happy that Howard now has a plan to make future flooding less likely, despite the high price tag.

“Watching and waiting hasn’t really helped anybody,” said Nicholas Johnson, owner of Su Casa Furniture. “It’s been hard. Anytime it rains, it’s been extremely difficult to get traffic into town, because everybody’s nervous about it being the next [flood] event.”

Randy Marriner, owner of the Manor Hill Tavern, said he is “thrilled” with Ball’s plan, though he is “concerned about how we’re going to pay for it.”

“With no plan, the town was doomed, because it’s going to rain again.”

The state has already pledged more than $11 million toward flood-mitigation efforts. Although Ball declined to be drawn into specifics about how the county will fund the remainder of his plan, Del. Courtney Watson (D-Howard) said lawmakers will continue to fight for state dollars.

“It’s a better plan for the town and the citizens. I think it’s safer. … And we plan to be there every year in Annapolis to help bring funding to help pay for it.”

Ball is in his first year as Howard County executive, having defeated Allan Kittleman (R) in November. He had served on the County Council for 12 years.

Without mentioning his predecessor by name, Ball noted that “the previous [administration’s] plan called for more buildings to be knocked down and left more water on Main Street” in computer modeling.

“We are making a statement: This is how we do things in Howard County. We don’t run from our problems and we don’t leave our neighbors behind.”

The county has established a website for residents to track progress on efforts to protect Ellicott City from future floods, ECsafeandsound.org.