Rummaging through your refrigerator, you come across a jar of mayonnaise labeled “BEST IF USED BY 06/10/19.” If it’s mid-July, are you risking illness by slathering it on your sandwich and eating it?

Massachusetts and New Jersey are considering measures to clear up the confusion, following a California law that went into effect earlier this year.

Several other states also are looking at labeling bills, as anti-food waste groups advocate for clearer signs to indicate when food is okay to eat, even if it’s not the freshest.

A bill that would establish federal standards for the labels, first introduced in 2016, has gone nowhere in Congress. Meanwhile, 43 states have their own rules, but they vary widely. Most limit labeling requirements to certain items, such as milk or shellfish. Some states prohibit the sale of past-date foods, and about half restrict donations of them. And the seven states without any laws leave it up to manufacturers.

The result: confusion for retailers and consumers, who throw out tons of food that is perfectly safe to eat.

Manufacturers largely include the labels to let retailers know when they should pull the product from their shelves, said Katy Franklin, operations manager at ReFED, a Berkeley, California-based nonprofit that focuses on reducing food waste.

“You might think this product isn’t safe after the date, but what it really means is that this food is not at peak quality after this date,” Franklin said.

More than a third of the food in the United States goes to waste — about 400 pounds a year per American. Food is the largest category of waste in landfills, where it generates methane that contributes to global warming. Discarding past-date food is a huge cost for retailers. 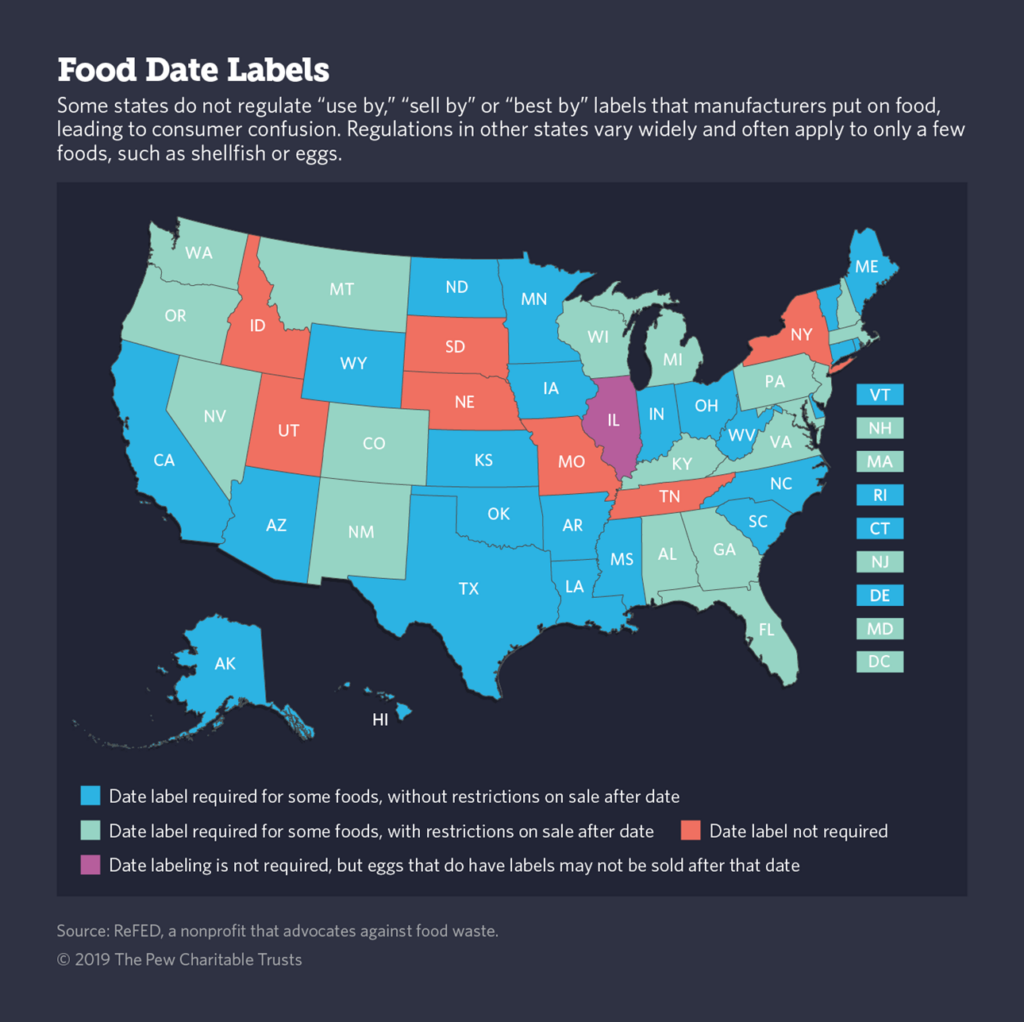 Food date labeling began in the 1970s, when consumers began to see an increase in packaged foods, according to the Natural Resources Defense Council’s seminal study, “The Dating Game: How Confusing Food Date Labels Lead to Food Waste in America.”

But in the absence of clear definitions and standards, food manufacturers tagged foods with whatever label they wanted, leading to confusion that persists today.

Advocates want the labels to be standardized and clearly defined, even if manufacturers continue to set the dates.

“We want people to be able to pick it up, look at it, and know that it means one thing.”

In a study published in February, researchers at the Johns Hopkins Bloomberg School of Public Health found that 84 percent of those surveyed discarded food on or near the package date “at least occasionally,” and 37 percent reported they “always” or “usually” discard food near that date, regardless of the words surrounding the date.

“More than half of participants incorrectly thought that date labeling was federally regulated or reported being unsure,” the study said.

The U.S. Food and Drug Administration offers a free “FoodKeeper” app to help consumers decide whether food is safe. But except for infant formula, the federal government does not require product dating. 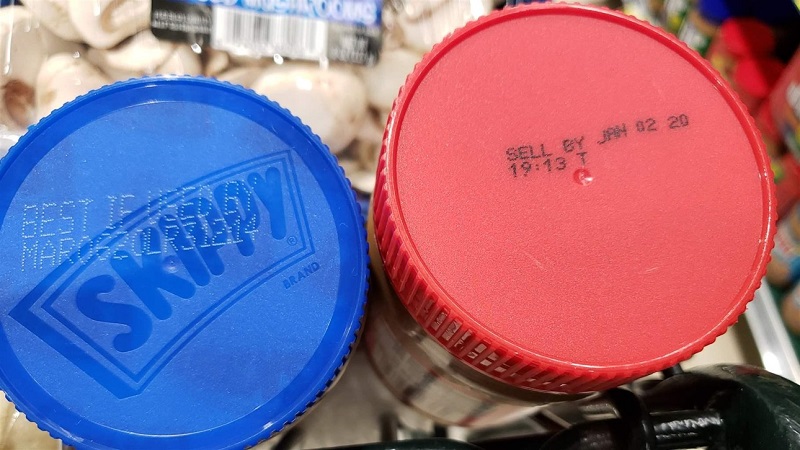 But the voluntary labeling has done little to end the confusion, said Roni Neff, assistant professor and program director at the Johns Hopkins Center for a Livable Future, which oversaw the report.

“There is still a need to understand what the labels mean,” she said in an interview with Stateline. “No education has been done to explain the new voluntary labels, and there’s no reason to think people would have magically acquired that knowledge.”

Neff added that how a food is stored plays a large role in how long it stays fresh or safe. “If you left something out for a long time, there’s no label that’s going to tell you that.”

But Meghan Stasz, vice president for packaging and sustainability at the Grocery Manufacturers Association, thinks the voluntary system should help ease confusion.

Stasz said the group’s 300 companies are phasing in the labels, and that 87 percent of members’ products already carry them. The system should be fully phased in by next year. If there is a public information campaign, it would begin at that point, Stasz said.

David Fikes, vice president for communications at the Food Marketing Institute, acknowledged that there is “great deal of education that needs to be done. We’re getting the labels down first and then saying, ‘Here’s how you need to interpret it.’”

The state bills pending in Massachusetts and New Jersey both call for only two categories. California’s new law, which is the most comprehensive state law, requires the state Department of Food and Agriculture to encourage food processors to use uniform terms on food product labels — “best if used or frozen by” and “use or freeze by” to communicate quality and safety dates.

Chiu, a Democrat, said he hopes other states will follow California in approving standardized labels for all processed foods.
“Every part of the food chain is throwing out food that could be eaten,” Chiu said.

Massachusetts state Sen. Edward Kennedy, a Democrat who authored the labeling standardization bill pending in his state, said a voluntary standard is not enough. “The thing is, nobody knows what that means. If you have a ‘sell by’ date, and it’s beyond the ‘sell by’ date, you may know you can consume the food, but you don’t know for how long,” he said.

New Jersey state Sen. Linda Greenstein, a Democrat who has championed a similar bill in her state, agreed that the current labels are far too confusing for consumers.

“Anything we can do to make food labeling understandable to people is a good thing,” she said.

It’s fun but bittersweet to speculate about how many of the developments in Maryland politics that the late Keith Haller would have anticipated.