Pugh’s attorney, Steven D. Silverman, read a statement announcing her decision in his downtown Baltimore law office. He declined to take questions, and Pugh did not appear.

“Dear citizens of Baltimore: I would like to thank you for allowing me to serve as the 50th mayor. It has been an honor and privilege,” Pugh said in the statement, according to The Baltimore Sun. “I’m sorry for the harm that I have caused to the image of the city of Baltimore and the credibility of the office of the mayor. Baltimore deserves a mayor who can move our great city forward.”

Baltimore City Council President Bernard C. “Jack” Young (D), who had been serving as “ex officio” mayor since Pugh went on a leave of absence for health reasons more than a month ago, will become the permanent mayor and will serve until at least December 2020. The next mayoral election is in 2020.

Young is attending an economic development conference in Detroit, where, he said, he is spreading the message that the city is open for business and that “Baltimore’s best days are ahead of us.”

“We can do this together,” he said in a minute-long videotaped message to city residents, which aired on Twitter. “We can’t do it alone. But together, we can make this the greatest city in America.”

City Solicitor Andre Davis, at a City Hall news conference, said city officials are trying to schedule a time for Gov. Lawrence J. Hogan Jr. (R) and other high-ranking elected officials to attend a formal swearing in for Young — likely next week. Davis cast Young as a stabilizing figure.

“The cloud of instability of leadership [lifting] is something we have to be very satisfied with,” he said.

Hogan and other prominent political leaders welcomed Pugh’s decision to step aside and offered support for Young and city residents.

“This was the right decision, as it was clear the mayor could no longer lead effectively. The federal and state investigations must and will continue to uncover the facts,” Gov. Hogan said in a statement.

“Baltimore City can now begin to move forward. The state pledges its full support to incoming Mayor Jack Young and to city leaders during this time of transition.”

“As Baltimore’s federal delegation, we are focused on supporting Baltimore City and its federal priorities,” the lawmakers wrote. “We recently met with Jack Young at the U.S. Capitol and directly expressed our desire to work as a coordinated ‘Team Maryland’ to ensure the people of our great city are best served and respected by their elected leaders. 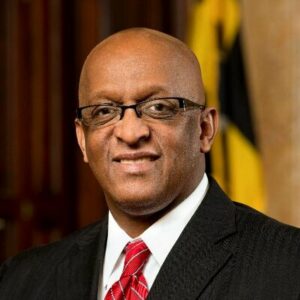 “We stand with Mayor Young today and will look to the future hand-in-hand. Baltimore City has many challenges remaining, but together we will strengthen our community, bring safety and security to our neighborhoods, and expand education and economic opportunities for those most in need.”

Young has generally received high marks for the way he’s handled city affairs in Pugh’s absence, appearing throughout the city to reassure residents and traveling to Annapolis and Washington, D.C., to meet with state and federal officials. But now the “interim” tag is off his mayoral title, the stakes become higher.

Previously, Young has said he was not interested in seeking a full term as mayor in 2020 — though that could change. Several political leaders, including City Councilmember Brandon M. Scott (D) and state Sens. Jill P. Carter (D) and Bill Ferguson (D) have been mentioned as possible candidates for mayor in 2020. So has former mayor Sheila Dixon (D), who lost narrowly to Pugh in the 2016 Democratic primary and had to resign her seat in 2010 after admitting to pocketing gift cards meant for city children.

Pugh’s political career was undone by scandals surrounding the sale of her “Healthy Holly” children’s books to several companies, government institutions and nonprofits — including some that were seeking to do business with the city. Her profits are believed to have totaled hundreds of thousands of dollars — leading to accusations that the mayor was self-dealing, dating back to her time in the Maryland Senate. Pugh’s campaign finances from the 2016 election are also being scrutinized.

The first allegations surfaced in March, when The Sun reported that Pugh and other members of the University of Maryland Medical System board had also received lucrative contracts from the medical system.

A month ago, Pugh took a leave of absence, saying she was suffering from pneumonia. At the time she vowed to return to the job when her health improved.

But Pugh’s position became more tenuous after FBI and IRS agents raided her home and City Hall office last week, along with other properties connected to the mayor and her associates. Local media reported that she had been under for federal scrutiny for at least a year.

Several Baltimore leaders cast Pugh’s departure as a chance for a reset for the beleaguered city.

“Catherine Pugh’s decision to resign as mayor of Baltimore today is in the best interest of the city,” said Donald C. Fry, president and CEO of the Greater Baltimore Committee, a business organization. “Her resignation provides Baltimore the opportunity to move forward without the distraction of the ongoing investigations and speculation as to leadership in City Hall.”

Fry said business leaders want to help Young succeed and “assist the city to grow, heal and leverage the many positive assets it has going for it.”