When Del. Adrienne A. Jones (D-Baltimore County) announced her bid for speaker of the Maryland House on April 10, her candidacy caused barely a ripple.

Two weeks later, the long-serving speaker pro tem, lacking apparent support, was out of the race.

Her subsequent endorsement last Friday of Del. Dereck E. Davis (D-Prince George’s), a fellow African-American who was competing with Del. Maggie L. McIntosh (D-Baltimore City) for the speaker’s gavel, was symbolic, but it didn’t appear to move the needle.

But on Wednesday, Jones’ strengths re-emerged in a manner that appeared to catch all of Annapolis by surprise.

It happened when House Democrats found themselves stuck in a four-hour, closed-door caucus session that had ground into stalemate between the two remaining candidates.

McIntosh had more support than Davis in the caucus, but not enough to win on the floor with Democratic votes alone.

Davis had a potential path to victory, but it relied on the 42-member Republican caucus, a prospect that left many rank-and-file Democrats inside the room — and left-leaning interest groups outside the room — angry and threatening retaliation.

The compromise name that legislators kept coming back to was Jones, the 64-year-old Baltimore County native who served for 17 years as speaker pro tem under the late Speaker Michael E. Busch (D). Jones’ calm and steady hand during the closing weeks of session was a gift, lawmakers from both parties said, particularly on the emotional final day, when the chamber was dealing with news of his death.

Exhausted and confronted with the potential of being stuck in gridlock indefinitely, the caucus chose her as their unanimous compromise pick.

During a subsequent short special floor session during which her name was placed into nomination by McIntosh and seconded by Davis, Jones was elected speaker, becoming the first woman and the first person of color to serve as presiding officer of either chamber of the oldest state legislature in the nation.

Lawmakers stood and applauded the result for some time, as did jubilant spectators in the gallery.

Within seconds, Jones was at the rostrum taking the oath of office from Del. Anne Kaiser (D-Montgomery), who had presided over the special session. Both women seemed to punch the word “speaker” with a bit of extra gusto, and again the chamber stood to applaud.

Speaking from the rostrum for the first time in her new role, and again in a news conference, Jones acknowledged shock at the sudden turn of events.

“I’m still overwhelmed by it all,” she said. “If you had asked me if I would be here in this moment at this time, I would have said absolutely not. … I’m very pleased and I’m looking forward to working with all members of the House of Delegates.”

Going into the Democrats’ 10 a.m. caucus meeting, a gathering that lasted hours longer than expected, it was unclear who would emerge victorious.

McIntosh told reporters after the vote that — given the uncertainty, and the potential for a stalemate that would have “fractured our caucus, our party for a very long time” — she and Davis had talked briefly about a potential compromise candidate prior to Wednesday.

“I offered Chairman Davis the option of, let’s pick someone else that can get to 71 [votes],” she said. “Enough people started talking about Adrienne … so both Chairman Davis and I decided we would step aside if people would support Adrienne, and it was unanimous.” 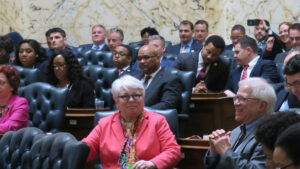 Del. Maggie L. McIntosh (D-Baltimore City), in pink jacket, and Del. Dereck E. Davis (D-Prince George’s), just behind her, were the leading candidates for speaker before the House Democratic Caucus stalemated on Wednesday. In this photo, they’re on the House floor just moments after Adrienne A. Jones (D-Baltimore County) was elected speaker. Photo by William F. Zorzi

Majority Whip Talmadge Branch (D-Baltimore City), a Davis supporter, cheered the surprise outcome because it represented unity after weeks of division — particularly between those working to see the first African-American speaker and those working to elect the first woman.

“This was a healing moment,” he said after the vote.

He called Jones’ nomination the glue that brought everyone back together.

In a statement, Gov. Lawrence J. Hogan Jr. (R) said he looks forward to working with the new speaker.

“I extend my sincere congratulations to Adrienne Jones on becoming the 107th Speaker of the House of Delegates,” he said. “The election of our first African-American and first female Speaker marks a proud and historic moment for our state.”

“It is also a moment of great opportunity; Adrienne has pledged to be a Speaker for all delegates, and that is exactly the kind of bipartisan, collaborative spirit our state needs right now.

“Delegate Jones has been a key House leader on issues including education, health, and environment for years,” Miller said.

Groups representing Maryland teachers and union workers offered their congratulations, as did the House GOP Caucus, whose support for Davis undoubtedly impacted the final outcome – though perhaps not as the Republicans had planned.

“I’ve never felt in any way like we didn’t have her ear, a fair mind, and frankly a welcoming spirit,” he said. “Our members have great affection for her.”

When the original vote was taken, the tally was 138-1, with Del. Neil Parrott (R-Washington County), an assistant minority whip, voting against Jones’ nomination. Just before adjournment, he asked that his vote by changed “from red to green.” 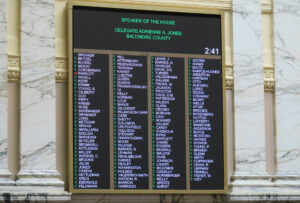 “I was wondering about that,” Jones said to applause and laughter.

When the legislature convenes in January for the 2020 session, lawmakers will again elect a speaker for the next year.

Asked if there will be a contested election then, Branch said, “Nope. Nope. This is done. This is it.”