When the Maryland State Highway Administration posted information that detailed how the potential widening of the Capital Beltway might impact Silver Spring and other down-county neighborhoods, homeowner Abbe Spokane realized right away that her fears about the project were justified.

“When I saw the map with the line right at my house, I wanted to cry,” she told a reporter at an SHA information session Wednesday night.

“The new ‘area of disturbance’ is at the curb in front of my house now, where once there was, say, 35 feet of woods,” she said, using engineering language she has picked up since Gov. Lawrence J. Hogan Jr. (R) announced plans to widen the Beltway (I-495) and Interstate 270.

Spokane was one of approximately 500 Silver Spring area residents to attend a Maryland Department of Transportation public workshop on the projects. The event was held at Eastern Middle School. 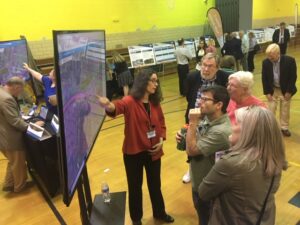 The Maryland Department of Transportation held an information session in Silver Spring on Wednesday night. Photo by Bruce DePuyt

A part-time linguistics instructor at George Washington University and a consultant, Spokane, her wife and their two children live in a home in the Indian Spring community they purchased five and a half years ago.

Spokane spent much of Wednesday evening standing outside the SHA briefing with a handmade sign that read “Build More Trains, Not More Lanes.”

More than a dozen SHA personnel — including the director of the Maryland Department of Transportation’s I-495 and I-270 Public Private Partnership Office — spent more than two hours talking to residents about the project and answering questions.

They held lectures in the school’s multipurpose room and used the gymnasium to display maps, diagrams and graphics posted on easels. State highway personnel stood at each station, where they engaged in small-group discussions and answered questions.

The Beltway, particularly the twisty sections that radio traffic reporters sometimes refer to as “the rollercoaster,” runs through numerous Silver Spring neighborhoods. Most of the homes closest to I-495 are smaller, older homes in quiet, established communities.

Many of the residents attending the SHA workshops appeared to have concerns about the state’s plans. Many expressed doubts that adding additional lanes — Hogan wants to add two in each direction — would solve the region’s traffic problems.

“The fundamental thing for us, really, is we don’t see putting down more pavement as a long-term solution to the problems,” said Philip Cotterill, a Silver Spring resident and a member of the group Citizens Against Beltway Expansion.

“If we felt really good about what was being proposed, we’d feel a lot more favorable toward making sacrifices, perhaps,” he said. 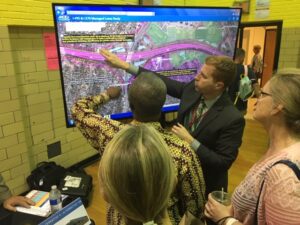 While SHA personnel were easily accessible and tried to provide information, the evening had a subdued quality. There were few smiles and skepticism hung in the air.

Homeowners who live closest to the Beltway seemed to congregate at large video screens with satellite photos that had tentative construction designs superimposed on the maps in bright colors.

Originally the state had 15 proposals — “alternatives” in agency-speak — for widening the two frequently congested highways, including a “no-build” option that is mandated by federal law. After the most recent round of testing for financial feasibility, environmental impact, the need to take existing structures and other criteria, the list was trimmed to seven.

Information on the seven surviving options was on display.

Last year, during his re-election bid, Hogan pledged that no homes or businesses would be taken through eminent domain to widen 270 and 495. State data released since then shows that as many as 34 homes and three businesses might be lost to construction or sound barriers.

State officials have said they will create incentives to the private sector firms that build the additional lanes to take as few as possible.

Under the state’s plan, companies will front the cost of construction in exchange for the right to charge tolls on the new lanes. The number of existing lanes available for free use will not be diminished under any scenario, officials have said.

“The evidence would indicate that the Hogan administration, on this project, isn’t interested in public opinion,” he told Maryland Matters.

“They’re rushing forward with a largely pre-determined outcome. They are not working with local elected officials, local engineers, local planners, local transportation officials at all on this. We’ve asked them to include transit, to protect homes and local businesses, and to stage it so that we’re focused on the places where you get the most benefit,” Hucker said.

He said the potential loss of 37 buildings is “a far cry from the bright line that the governor drew” before the election.

In addition to wanting a more collaborative relationship with the state, county leaders are also frustrated by what they say is a lack of data on the commuting patterns of rush-hour drivers, which could be used to guide the design process.

“When I asked whether they had done a study like that, they said they’re relying on a study from the ’80s,” Hucker said. “It’s all very troubling.”

Lisa B. Choplin, director of SHA’s I-495 and I270 P3 Office, said officials have been looking forward to the public workshops because they value the public’s input.

“The decision to eliminate the [local] lanes on some of the 270 alternatives came in response to citizen feedback regarding encroachment on neighborhoods,” she said in an interview.

And she addressed complaints from Hucker and others — including Montgomery County Executive Marc B. Elrich (D) — that the state has not taken local leaders’ suggestions into account.

“The time for those feedbacks for those alternatives was earlier in the process,” she said.

“Some of the feedback that we’ve been getting has been outside of our managed lanes study parameters, so we certainly want to hear that information and that feedback but our focus in on the study limits that we have established,” Choplin said.

Outside the school, road-widening opponents set up card tables where they encouraged area residents to sign up for future updates on the project. One handout, from Citizens Against Beltway Expansion and the Sierra Club, was headlined “Myths and Misperceptions Regarding the MDOT Plan for Expanding I-270 and I-495.”

“My home value has already fallen,” Spokane said. “Perhaps to such a degree that I can’t afford to sell my home should the situation become unbearable during construction, after construction, noise-wise, pollution-wise.”