MANCHESTER, N.H. – Maryland Gov. Lawrence J. Hogan Jr. (R) told reporters in New Hampshire on Wednesday that President Trump faces a difficult reelection race next year because of the number of voters who have rejected his brand of politics. He said his reading of the special counsel’s report on the 2016 election made it clear that Trump “attempted to” obstruct justice in the Russia investigation.

Hogan said he will spend the next several months traveling the country talking to people as he contemplates a 2020 race for president, though he has no precise timetable for making a decision.

Hogan was the featured speaker at the “Politics & Eggs” breakfast, an event frequented by presidential candidates, and  then took questions from members of the audience and a large press contingent that included reporters from New Hampshire, home of the nation’s first primary, nearby Boston, one of the nation’s largest media markets, and a smattering of national writers.

The event is sponsored by the New Hampshire Institute of Politics at Saint Anselm College in Manchester.

In even more vigorous terms than he has before, Hogan slammed the Republican National Committee for trying to protect the president from a robust primary challenge. He said the RNC’s alignment with the Trump campaign was “worse” than what the Democratic National Committee did to boost Hillary Clinton’s campaign in the last election.

“I think it goes way beyond what the DNC did back in 2016,” Hogan said. “I think they’ve taken way more steps to try to stack the deck in favor of the president. I think it was wrong what the DNC did, but this is much worse.”

Hogan acknowledged that Trump remains strong with GOP base voters, but in his remarks he faulted the party for failing to reach beyond “a certain percentage of white males” at the party’s core.

He made it clear that if he runs, he will court middle-of-the-road voters, including those outside his party, who take issue with the president’s policies, conduct or both, though he conceded the party’s actions might hamper him.

“There are, I think, 23 states that have open primaries,” Hogan told a press scrum after his remarks. “So independents and/or Democrats can cross over and vote. If they [the RNC] don’t change all the rules — and in some cases they’re trying to do away with primaries altogether, in some states they’re trying to change primaries into caucuses, that kind of stuff is going to make it very difficult.” 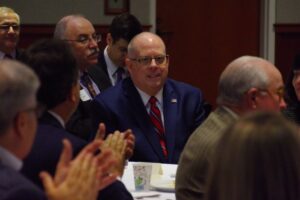 In his most extensive public remarks about the just-released report by special counsel Robert Mueller, Hogan said “there was certainly evidence” that Trump attempted to obstruct justice.

He also said he found White House aides’ descriptions of the president’s conduct to be troubling.

“It certainly did not completely exonerate the president, as he said. There was some very disturbing stuff that they found in the report. And just because aides did not follow his orders, it’s the only reason we don’t have obstruction of justice.”

“There was some really unsavory stuff in the report that did not make me proud of the president,” Hogan added. “And there was certainly nothing to crow about and nothing to celebrate in that at all.”

“I don’t think [impeachment hearings] would be productive,” he said. “I think most people in America are sick and tired of this whole two-year investigation. … But I also don’t think there should be a coverup from the administration. And I don’t think you should be white-washing the thing.”

Hogan said he has met with many GOP leaders and has encouraged those, like former Massachusetts Gov. William Weld, who have decided to take Trump on. By his count, he has been to 10 states and has plans to visit 16 more, mostly tied to his role as incoming chair of the National Governors Association.

The governor blasted members of his own party who grumble about Trump’s conduct among one another but refuse to take him on publicly.

“It’s very frustrating,” he told reporters. “I know there are a number of my colleagues — both governors and senators and members of the House — who will say privately they’re very concerned but they won’t say anything publicly. And I think it’s because they’re afraid. There’s no profiles in courage here. They’re afraid of being primaried. They’re afraid of being tweeted about. And very few of us are willing to say what we really think.”