Michael Erin Busch, the longest-serving speaker in the history of the Maryland House of Delegates, was remembered at services Tuesday as a JFK Democrat whose life was shaped by strong women, his Irish Catholic faith and a near-obsession with sports.

A fixture of the General Assembly for more than three decades, half spent as presiding officer, Busch’s guiding principles, admirers said, included a belief that the government should work for everyone, not just the well-off or the well-connected. 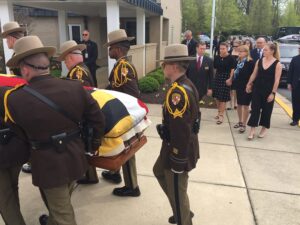 Hogan told the crowd of more than 1,000 mourners that the late speaker, who died April 7 at age 72, was a “strong pillar” of state government.

“He leaves an indelible mark on this city, on our state and on all of our hearts,” Hogan said of Maryland’s 106th speaker.

He was a “fearless advocate and a true champion for the people that he represented,” the governor said. “He tackled tough issues, like health care, and worked passionately to improve education and to protect the Chesapeake Bay.”

Like his predecessor, Casper Taylor, Busch served as chairman of the House Economic Matters Committee before becoming speaker.

Former delegate D. Bruce Poole (D), who like Busch was first elected in 1986, summarized his friend’s governing philosophy: “It was pretty fundamental. Do everything you can do to make the wheels of commerce turn. But make sure those wheels don’t run over us in the process. And always look out for the ordinary citizen.”

Joseph A. “Jay” Schwartz III, a prominent lobbyist and Busch friend, echoed that sentiment. “Mike was repulsed when he saw greed or the abuse of power.” 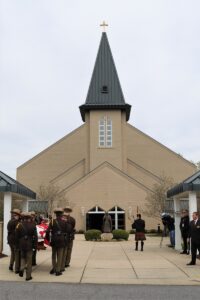 A bagpiper plays outside of the funeral of the late House Speaker Michael Erin Busch (D). Photo by Danielle E. Gaines

“In 2000, when the CareFirst executives decided they were going to take the company public, a company that had been nurtured by Maryland taxpayers … and reap millions of dollars of rewards for themselves, or in 2005, when race track owners put in a slots bill that was going to make sure that they got all the money rather than the state got all the money, or with the University of Maryland Medical System mess that we’ve seen, or when we saw a regulator using the [entity he or she was regulating] as a cash cow for their political campaign, he couldn’t stand that stuff,” Schwartz said.

Busch was a gifted athlete — a running back at Temple University who dreamed of playing in the NFL until a knee injury derailed his plans. Although he became a history teacher, sports remained a major passion, many speakers said.

He was a lifeguard, he coached multiple sports — including his daughters’ teams — and he kept fit (what one eulogist called “his incredible jock physique”).

“He was a phenomenal high school lacrosse referee,” said Judge Richard H. Duden III, an associate judge on the Anne Arundel County District Court. “He commanded instant respect from otherwise obnoxious coaches — because he’d been a coach himself, and he was the epitome of grace under pressure in a big game.”

Before taking a position with the Anne Arundel County Department of Parks and Recreation, Busch taught history at his alma mater, St. Mary’s High School.

“Mike didn’t teach much history,” Duden recalled his wife, Nancy, a former student, once saying. “But he loved to share stories about his life experiences. To the point where some would refer to the class as the History of Mike Busch.” 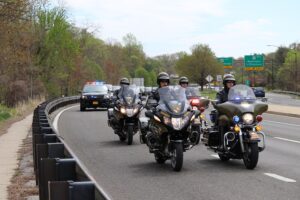 “And you know how after the games, all the other kids would just leave with their parents, maybe go out for ice cream or something super fun like that? That was not the case for me,” she said.

“Me and my Dad drove home in a silent car the whole entire way,” she continued.

“Once we got to the house, he just looked over at me and said, ‘Grab a ball and go to the back yard. You’re doing lay-ups until I say stop,’” she said laughing.

“After that day, my shot percentage went way up,” she said. “He saw what we were capable of even when we couldn’t see it for ourselves.”

Several speakers noted the key role that former Anne Arundel County Executive Robert A. Pascal (R) played in Busch’s life, including his decision to seek a seat in the Maryland House.

“He brought people together. Perhaps this was his signature skill,” Duden said. 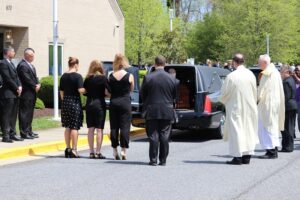 Cindy Busch and her daughters, Erin and Megan, pause as the casket of the late Speaker Michael Erin Busch is placed in a hearse. Busch was honored with a Maryland State Police motorcade through Annapolis, including a stop near the family’s longtime home on McKendree Avenue. Photo by Danielle E. Gaines

Although pneumonia kept Busch away from Annapolis for the closing weeks of this year’s legislative session, he hoped to get back in time for the final day, known by the Latin phrase Sine Die. Instead, he died one day before the legislature adjourned.

Schwartz raised eyebrows when he took issue with the lawmakers who pushed, in behind-the-scenes discussions, for a quick succession vote at the start of the April 8 session.

“He would have been shocked and outraged by the minions who tried … to fast-pitch a vote for the new speaker on Sine Die Monday,” Schwartz said.

The casket with Busch’s body was brought to the church in a motorcycle procession led by the Maryland State Police, including several of the officers who had provided security for the speaker for many years.

After the service, Hogan presented Busch’s widow Cindy and his two daughters a folded Maryland flag that had flown over the State House on the day Busch died.

The family, the governor, Senate President Thomas V. Mike Miller Jr. (D), Hoyer and others then watched as the wooden casket was placed inside the hearse for the final time as a bugler played “Taps.” 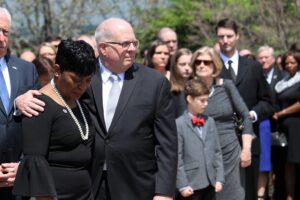 Busch endured a series of health challenges during his final years, including a liver transplant in 2017 and heart bypass surgery in 2018.

Faced with his mortality, Schwartz said, Busch had two items on his “bucket list” — to take in a University of Notre Dame football game, which they did, and a trip to the Baseball Hall of Fame, which eluded them.

“[Last] Wednesday, a few days before he died, he told me that as soon he got out of the hospital bed, we were going to Cooperstown,” Schwartz said.

“I could still go to Cooperstown, but I won’t. Because Mikey, without you, it wouldn’t be any fun.”