After nearly 150 years of calling Baltimore home, the Preakness Stakes could be leaving the city in 2021, a move that would take one of the area’s biggest party days of the year — and a lot of money for the local economy — along with it.

Nestled in the heart of Charm City’s north side, Pimlico Race Course has hosted the second leg of the Triple Crown since 1873 but soon could be replaced by newer facilities in Laurel.

The Stronach Group, owner of the track, has recently expressed concern over the condition of Pimlico and favors the renovated facilities at Laurel Park, a site that the ownership group has been pouring significant money into since 2011.

Legislation that would have shifted state funding from Pimlico to Laurel Park died on the last day of the General Assembly session, but not before Baltimore’s ex-officio Mayor Bernard C. “Jack” Young met with the city’s Annapolis delegation a few days before the April 8 vote. [See related Maryland Matters story.]

“The biggest thing on my agenda is Pimlico,” Young told city lawmakers.

“Baltimore City is going through a very difficult period in its history, with Mayor Catherine Pugh taking a leave of absence for health reasons while simultaneously facing serious allegations into her conduct as an elected official,” Young wrote in a letter to Senate President Thomas V. Mike Miller and House Speaker Michael Busch in early April. “I am writing to you today to ask for your leadership in preventing our city from suffering insult on top of this grave injury.”

Despite recent pushback from Pugh, who sued The Stronach Group last month in attempt to block the move, the departure of Preakness from Baltimore seems increasingly realistic, thus depriving some local bar and restaurant owners of one of their most lucrative weekends of the year.

“It would definitely be a hit [to business],” Kelly Rather, owner of Mother’s Grille in the Federal Hill district of Baltimore, told Capital News Service. “It’s a great day for us, and it would be a shame because I think it’s one of the very few events that we have in Baltimore that puts us in a national spotlight.”

Mother’s Grille, in its 21st year of operation, has emerged as one of the area’s hot spots for pre- and post-race food and drink.

A partnership with BMORE Around Town, a service that provides transportation to and from Pimlico, has helped make Preakness weekend just as big of a money-maker for the bar as Ravens home games, Orioles Opening Day and St. Patrick’s Day. 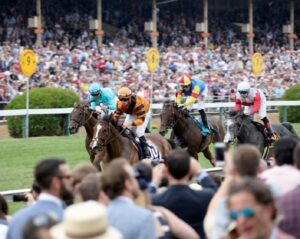 A race at the 2017 Preakness. Maryland Governor’s Office photo

The “pregame” and “postgame” scenes stretch to Fells Point and as far north as Towson, where nearby campus bars and restaurants facilitate the movement of the college-aged crowd to Pimlico.

“It’s definitely a big [weekend] and the college kids that are from New Jersey and Texas — all over — they stay for that weekend. Because, typically, school’s over. It’s almost like a graduation celebration,” explained Jill Packo, owner and manager of the Greene Turtle in Towson. “Definitely a huge increase [in revenue] from a typical weekend.”

Packo said business at her other Greene Turtle location in Fells Point does even better during Preakness weekend.

Nearby Towson establishment Charles Village Pub and Patio, better known as “CVP,” experiences much of the same success on a yearly basis. Owner Rick Bielski estimates CVP brings in roughly 25 percent more revenue for Preakness than on an average weekend.

A move to Laurel Park, located nearly 30 miles south of Pimlico, would cast a cloud of uncertainty over Preakness weekend for many Baltimore-area bars and restaurants.

The race would generate nearly $53 million in economic activity annually for the city of Baltimore if it remained in a renovated Pimlico, according to The Baltimore Sun.

The price of admission likely would increase and there would be no “infield” scene, which could impact the attendance of college students and young adults that annually pack the large, muddy inner-oval at Pimlico.

The infield at Pimlico in recent years has been home to InfieldFest, an annual music festival taking place on the day of Preakness. Artists such as Kygo, Diplo and Logic will headline the lineup for the 2019 race.

Would Baltimore hotspots like Federal Hill, Towson and Fells Point still be bustling, lively pregame spots for the race? Would Preakness be more associated with the Washington, D.C., area? Would Preakness still be a draw for young people? These are questions that some bar owners hope they don’t have to answer.

“Doing it in Laurel, I just feel like it wouldn’t be the same. It’s just always been Pimlico,” said Rather, who said that a move to Laurel Park would likely draw an older crowd.

“I think [moving] would be a detriment to Preakness,” Packo said. “I don’t think the young kids would go as much if it was moved to Laurel.”

“I think it would take them years to build that in another area, because it’s too far,” Packo added. “There’s too many colleges right here [in Baltimore], there’s too many local places. Other than RJ Bentley’s and the strip right at [the University of] Maryland, I don’t know of the other places that would be a draw.”

The move to Laurel would put the Preakness Stakes roughly halfway between Baltimore and the nation’s capital, opening the door for Washington-area bars, restaurants and hotels to step in as hosts for race-goers and tourists.

“To be honest with you, I think [the pregame and postgame scene] would probably move down closer to the D.C. area,” Bielski said. “I think when people come in town for the Preakness, they get hotels around the area and kind of filter down into the city and up through Towson. I don’t think that would be the case if it did go to Laurel. I think the whole package would move more south.”

Jones, whose three establishments are some of the more popular bars in the Federal Hill area, believes the draw of the race will be enough to stir up crowds, both at Laurel Park and his bars and restaurants.

“People are getting caught up in the nostalgia of Pimlico,” Jones continued. “It’s still going to be the Preakness Stakes. Whether it’s in Harford County or whether it’s in Howard County, I still think that people are gonna go.”

Beyond then, however, the future of the Preakness at Pimlico will be dictated by a political battle between The Stronach Group and the city of Baltimore. It would reportedly require $424 million to renovate Pimlico and keep the race there, according to a recent study.

“This is a gem for our city,” Pugh said of Preakness last month. “It is an economic generator. It is part of our history.”

Pugh has since taken an “indefinite leave of absence” from her position for health reasons. The leave came amid a brewing scandal over possible financial improprieties in connection with a book she authored.

The State House lobbying trade is being drastically altered by the COVID-19 pandemic, but that may not make it any less desirable or remunerative….