Maryland’s longest-serving House speaker, Michael Erin Busch, was welcomed back to the State House one final time Monday afternoon. He will lie in repose under the capitol’s iconic wooden dome until services Tuesday morning.

Clad with the Maryland state flag that flew over the State House on the day of his death, Busch’s casket was carried into the State House rotunda shortly after noon Monday, where a crowd of current and former lawmakers, lobbyists, well-wishers and Annapolitans, gathered for a final goodbye. Busch, 72, died April 7 after being hospitalized last month with pneumonia.

“We return Speaker Mike Busch to the place he loved and where he made such a positive impact on the lives of the citizens of Maryland,” said U.S. Sen. Benjamin L. Cardin (D), himself a former speaker of the House of Delegates. 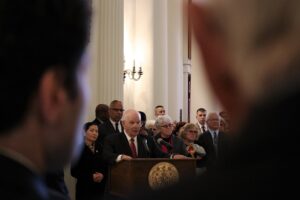 Cardin said it was a “singular honor” to be elected speaker of the House of Delegates, “to be the leader among leaders.” It was a feat Busch, with his even-handed and team-playing ideals, achieved not once, but 17 times.

“It is fitting that we have this opportunity to pay our respects to such a great Maryland leader, here in the city that he called home, and in these hallowed halls, where he was such a strong presence for so long,” Gov. Lawrence J. Hogan Jr. (R) said. “Mike Busch dedicated the greater part of his life in service to our state, and he left Maryland a better place than when he found it. We are grateful for the time we shared with him.”

Former U.S. Sen. Barbara Mikulski (D), wearing a Speaker’s Medallion that was given to her by Busch, said she and Busch shared many milestones. He was elected to the House of Delegates the same year that she was elected to the U.S. Senate. Both would go on to earn “longest-serving” titles in those chambers.

“But Mike would be the first one to say it’s not how long you serve, but how well you serve. And certainly Speaker Busch served so very, very well,” Mikulski said.

While many called Busch “Coach,” Mikulski said she would also refer to him as “Champ,” for the vigor with which he took on issues close to his heart. While at work, he would focus not just on policy, but also on people.

“The macro issues and the macaroni-and-cheese issues,” Mikulski said. 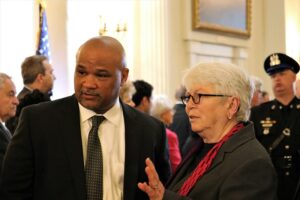 “The truth is, there are no words big enough or loving enough to describe what Michael Erin Busch gave to those of us who served with him,” McIntosh said. “Rest in peace, my speaker, our leader and our friend.”

House Economic Matters Chair Dereck E. Davis (D-Prince George’s) said Busch was quietly behind some of the biggest policy issues that saw success in the legislature but was happy to coach others from behind.

“His fingerprints were on everything. But he was strong enough, courageous enough and humble enough to let others shine, to let others stand before him,” Davis said.

House Speaker Pro Tem Adrienne Jones (D-Baltimore County), who served as Busch’s backup for 16 years, said Busch had a knack for telling when a delegate had something on their minds and would invite them to his office to talk things through. For that, he probably should have earned the title of psychologist as well, Jones said. 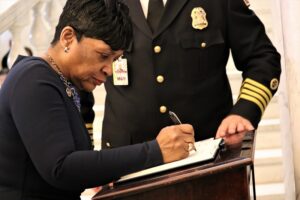 “He saw good in people that they did not see in themselves. And for that, many of us are grateful,” she said.

Sen. Sarah K. Elfreth (D-Anne Arundel), a freshman who ran on a slate with Busch last year, said a lot of people wouldn’t be in their positions within the State House if it weren’t for Busch’s guidance and encouragement.

“A lot of people could say that he gave them opportunities that they didn’t know they were ready for, but his confidence made them feel like they could do it. We all rose to the occasion because he believed in us,” she said. “His legacy is going to be not just in the policy but in the people he impacted, all of the members of the General Assembly who came up under him and learned from him. It’s going to be quite long, his legacy.”

While there were serious debates, Busch treated everyone well, and allowed all voices to be heard.

“When we didn’t agree, he ensured that there was a fair process. As speaker, he doesn’t have to allow as robust a debate as we’ve had over the years, he allowed it to occur because he thought that was the right thing for the institution,” Kipke said. “It’s the type of style that we need more of in politics today.”

A line of well-wishers snaked through the State House into the afternoon hours.

Edgewater resident Sharon Setzer and her friend Helen spoke in glowing terms about the man who represented — and fought for — Anne Arundel County with such gusto.

“I just have a great respect for him,” Setzer said. “He was a very focused person. He had integrity. Everything I’ve read about him — I just respect him tremendously.” 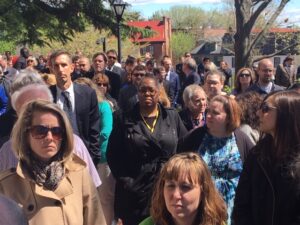 Mourners wait in line to pay their respects at the State House in Annapolis on Monday. Photo by Bruce DePuyt

Malik Rahman, who served as chief of staff to former senator Clarence M. Mitchell III during the 1980s, also traveled to Annapolis out of admiration for how Busch treated others.

“I can only come up with one word — fair,” he said. “He liked to build consensus. He was just a good guy. The state has lost a good soul.”

In the basement of the State House, a trio of Busch supporters, wearing T-shirts with the campaign slogan “Maryland’s speaker, OUR delegate,” swapped stories about their time on the campaign trail.

“We knew Mike before he came into the politician world. He was an all right guy then and he could get along with people, he had a heart to help people,” Spencer said. “And when he ran for office, it wasn’t a problem for us to get behind him.”

Spencer said his favorite memories of Busch are from a holiday luncheon every year at the Stanton Community Center in Annapolis.

“He would mingle with the kids and with the people. And he really felt like he was Santa Claus,” Spencer said.

Deborah Johnson said she would always remember Busch for reaching out and getting to know people.

“He was a voice for those whose voices were often left unheard. That’s what I loved about him,” Johnson said. “He had a heart for people. He genuinely cared for people.” 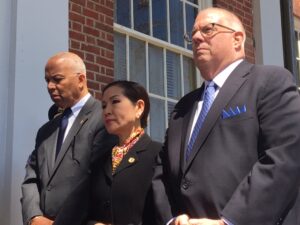 A second public visitation is scheduled for 8 to 10 a.m. Tuesday.

Around 10:45 a.m. Tuesday, a Maryland State Police procession will carry Busch’s casket around State Circle and to St. John Neumann Church in Annapolis, where the funeral will be held.

A reception honoring the speaker will be held from 1 to 4:30 p.m. at the Atkinson Tower at Navy-Marine Corps Memorial Stadium.