Heading toward my reserved seat inside the U.S. Supreme Court last week to listen to two redistricting cases, the North Carolina case Rucho v. Common Cause and the Maryland case Benisek v. Lamone, I stopped before climbing up the court’s steps and looked at a building standing on the corner of First Street SW and D Street SW.

Flashback: In June 1970, as a 26-year-old protégé of Congressman Clarence Brown (R-Ohio), I entered that building for my new position of assistant vote statistician at the National Republican Congressional Committee (NRCC). There I was greeted by the legendary Dr. Pierre Marot Purves, the nation’s leading authority on congressional redistricting in the 1960s and early 1970s.

1970 was the first census year since the U.S. Supreme Court’s 1964 decision that requires each state to draw its congressional districts so that they are approximately equal in population, Wesberry v. Sanders, 376 U.S. 1 (1964).

Our assignment was to accumulate, compile, and publish the “Congressional Vote Statistics” book for every state in the nation, adjusted to show the impact of “one man, one vote” redistricting shifts since 1964.

In his acknowledgments in the NRCC book titled “1970 Congressional Vote Statistics,” Purves wrote, “We are greatly indebted to Howard Gorrell for assuming the responsibility of detecting errors and maintaining consistency in the presentation of material.” 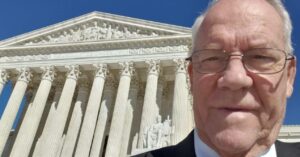 Back to the Supreme Court hearing last week. Associate Justice Elena Kagan at one point said to Paul D. Clement, a lawyer for North Carolina lawmakers, “In other words, all the computer simulations, all the 24,000 maps, right, really do take the political geography of the state as a given.” Being deaf since birth, I signed quietly to an interpreter for the deaf, Carrie Quigley, if Justice Kagan had said, “24,000 maps.” She nodded wisely.

Hofeller was not at the hearing; he died last August at the age of 75. But he may have been there in spirit: The New York Times described him as “a father of the Republican strategy of cementing political control by controlling redistricting.”

After the hearing, Maryland co-plaintiff Jerry DeWolf said to Quigley, Stephen M. Shapiro, who initiated this Maryland redistricting case, and me, “That’s absolutely crazy, and it certainly highlights how wasteful and out of touch our government is to generate so many possibilities. It’s certainly not what the framers of our constitution had in mind, and certainly not what the average citizen should expect. We don’t need 24,000 maps to choose from, we need one map that has compact, contiguous, districts that form from geopolitical and geographical boundaries.”

Flashback: I worked as an electoral analyst for the Computer Service Division of the Republican National Committee (RNC) under the directorship of Hofeller from 1984 to 1986. But I don’t recall whether he did any gerrymandering for state organizations while I was there. I did some research recently, and I found that he seemed to start gerrymandering in 1991 (five years after I left the RNC). A decade later in 2012, Hofeller was called the nation’s most dangerous mapmakers by The Atlantic magazine.

Back to the Supreme Court hearing. “Now, if we look at history, there wasn’t that much gerrymandering in the past compared to what there might be with computers in the future,” said Associate Justice Stephen Breyer.

On March 1, the emergency commission selected a newly-reconfigured 6th Congressional District map submitted by Stephen Wolf. “This isn’t a perfect proposed plan, but I think it’s the best we can do under difficult circumstances,” said retired federal judge Alexander Williams Jr., who is the co-chair of the commission. I decided to test the Wolf map by using Purves’ redistricting method without using computer technology.

In micro-researching the Wolf map, I found there are 11 precincts that are split between the 6th and 8th districts. Interesting, sitting in the 6th Congressional District, Precinct 05-007 in Montgomery County has twenty-two (22) census blocks in the 8th Congressional District, but all of these blocks show zero population. Same in Precinct 02-006, Precinct 06-009, Precinct 09-011, and Precinct 09-011 (all in Montgomery County). These could weaken the strength of the “Communities of Interest” factor.

After the Supreme Court hearing, the media rushed toward Gov. Larry Hogan of Maryland and former Gov. Arnold Schwarzenegger of California, who filed a joint “amicus curiae brief in support of the Benisek plaintiffs. While Quigley continued interpreting to me what the governors said, I was thinking of my first redistricting mentor, Dr. Purves. When he died in 1987, he could not have known how dangerous a threat gerrymandering is to democracy today.

The writer was the first complainant challenging the constitutionality of the apportion of congressional districts of the State of Maryland for the 2010 decade, based primarily on alleged partisan gerrymandering and insufficient consideration of communities of interest. See Gorrell v. O’Malley, 2012 WL 226919 (D. Md. Jan. 19, 2012)