The combustible word “reparations” was first officially heard in Maryland politics around 1969-70.

The civil rights movement was at its peak, blurred, as it had, with the violent anti-Vietnam War protests. The Eastern Shore town of Cambridge was under siege as was the College Park campus of the University of Maryland. Sections of Baltimore were rubble from demonstrations. Protesters marched through Maryland en route to the nation’s capital to make a divisive point. And Marvin Mandel was just getting comfortable as the state’s newly installed governor.

A group, heretofore unheard of, calling itself the Maryland Association of Black University Professors, demanded a meeting with Mandel. A date and time were set for the governor’s Baltimore office, then on the 15th floor of the State Office Building on Preston Street.

They arrived, about a half-dozen strong, led by a math professor from the University of Maryland Baltimore County, who resembled the inflated Eddie Murphy in “The Nutty Professor,” wearing an undersized bowtie mostly buried under his second drooping chin and an oversized helmet of hair, a neatly coifed Afro. 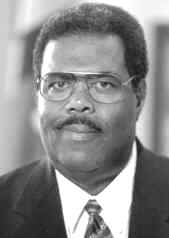 His name was Howard Peters Rawlings and he hadn’t yet become the force of nature and formidable state legislator that he was destined to be. Rawlings would later become a member of the House of Delegates and chairman of the heavyweight Appropriations Committee.

Pleasantries over, Mandel asked the reason for their visit.

“We’re here to demand four hundred million dollars in reparation for slavery,” Rawlings said, speaking as president of the group.

Mandel spluttered and nearly choked on his (then) ever-present meerschaum pipe.

“Get serious, what do you really want?” Mandel said.

And that’s the question for Democrats today: What do they really want by gratuitously reviving the reparations issue beyond a couple of cheap headlines and, possibly, a few black votes, or, more probably, black revulsion over the exploitation?

For in a slightly different way, the three Democrats pandering on the issue – Sen. Elizabeth Warren, Sen. Kamala Harris and former Housing and Urban Development Secretary Joaquin Castro – are no different from President Trump in stoking racial divisions. The three are all bright, gifted minorities – except for Warren’s unauthentic claim to Native American pedigree for which she has apologized – who should know better politically.

In doing so, they may have found the one certain way of assuring Trump’s reelection when all else points to his unraveling and defeat in 2020, which is no guarantee that he’ll go peacefully and without further tattering the Constitution with dictatorial threats and banana republic declarations.

Reparations enjoyed a brief but spirited revival in the 1990s along with “Ebonics,” a dialect composed mainly of diphthongs and Gullah, in one of those periodic assertions of cultural roots. (Advancing Ebonics as a cultural taproot was a cause of Cornell West, the radical black professor then at Harvard and now at Princeton University.)

Reparations gained renewed attention as a topic of discussion through a 16,000-word article a few years back in The Atlantic Magazine by Ta-Nehisi Coates, “The Case for Reparations.” Coates, Baltimore born, argued that payment should be forthcoming for the “plunder” whites had waged against blacks for generations. (Sorry, Ta-Nehisi, but you were a little late and redundant to boot. A more cogent presentation was made in the 1960s by Sociologist David Caplovitz in his epic study, The Poor Pay More.)

Politics is a form-follows-function kind of business. And now, what goes around comes around with a vengeance. Introducing the topic of reparations into the crowded Democratic campaign for president, no matter how casually, is certain to thrust the issue into the mainstream of political discussion, especially among the Democrats’ newly energized left flank. (How long can it take before the Democrats’ shooting star, Rep. Alexandria Ocasio-Cortez, of New York, joins the cause?)

To advocates of reparations, vaguely, payment, in some form, to descendants of slaves, is long overdue. It would compensate for (long ago) years of hard labor, followed by injustice, deprivation, discrimination and denial of entry into the American mainstream because of color. Put another way, it is payment of some kind for sins of the past.

The counterpoint to this is that much of the grievance pre-dates by centuries anyone alive in America today and by generations anyone whose forbears even crossed these shores when the nation’s so-called Original Sin occurred. In other words, those who would be responsible for the payments today weren’t even embryos at the time of the abuse.

The catalog and the arguments roll on. Every new wave of immigrants pays some kind of human penalty as the price of admission to America. The Irish were discriminated against and held in their own peculiar kind of bondage. The Italian arrivals, in their turn, were beaten down by the Irish. There were riots in New York against Italians who were charged with a willingness to work for lower wages than the Irish, a job killer, as Trump would phrase it. And now it’s Hispanics who’re undergoing that grinding rite of passage.

Another kind of slavery were the so-called company towns during the 19th Century industrial boom. They were largely identified with railroads, coal and other mineral mines and lumber camps. They had one thing in common – the company that established the towns and employed the workers who lived there owned everything. The workers were forced to shop at company stores and pay to sleep in company shacks and were literally held hostage in the compounds by armed guards. The hundreds of company towns that were strung across America were effectively slave-labor camps.

Other towns were social experiments built around specific industries. Hershey, Pa., was built mostly for and about employees of Hershey’s Chocolate and other businesses associated with the candy company. It was among the most intentionally segregated cities in America.

Reparations are a tetchy roundelay: Where to begin and where to end. Enslavement of one group by another permeates ancient history – the Egyptians and the Jews; the Romans and everyone around them; Alexander the Great; Genghis Khan; in modern times, the Communist takeover of Eastern Europe; the Russian gulags; North Korea; China and countless other retrograde nations.

None in America, save slavery, is as reprehensible as the government’s treatment of legal aliens and foreign-born citizens during World War II, especially the Japanese who were interred in prison camps.

Native Americans are another matter entirely. They were nearly wiped out in battle and massacre, rounded up and contained on reservations where they remain even today under isolated self-governance. As compensation, or reparation, if you will, some have been awarded casino licenses where they front for foreign investors, as they do at, say, Foxwoods Casino in Connecticut.

A friend of fractional Native American heritage once joked that “the only thing the white man ever gave the Indians was firewater and syphilis.”

Reparations can take many forms, as its advocates argue. Opponents advance the same reasoning, contending that the many government programs, direct payments, grants, subsidies of one kind or another, and affirmative action are all forms of reparation, some for at least 150 years, and many since the New Frontier and Great Society programs of the 1960s.

The one form of reparation that should not be included in any campaign is political pandering by Democrats. It’s certain to come back and bite them. Even Trump understands that.

For 50 years, Democrats have imagined that a high turnout of young voters will help their candidates. But the enthusiasm and turnout they desire is often illusory.

Edwards vs. Ivey: A Race Between Former Insiders, Being Dominated by Outsiders

Washington, D.C.-based Super PACs spend lavishly to blitz the airwaves in the lead-up to the July 19 primary.