Del. Mary Ann Lisanti (D-Harford) was supposed to appear before the House Health and Government Operations Committee Monday to defend one of her bills, governing how the public should be notified when medical facilities are closing. She did not show up.

When the House of Delegates went in for its evening session five hours later, Lisanti was also AWOL. And she was absent on Friday.

Now that she has been censured by her colleagues in the House of Delegates, for uttering a racial epithet in an Annapolis barroom in January, Lisanti’s status is very much an open question. She has been stripped of her committee assignment and leadership posts. She hasn’t been seen in Annapolis since the House took that unanimous vote on Thursday night.

But equally unclear is the status of Lisanti’s legislation. She is the prime sponsor of 16 bills, ranging on everything from clean energy jobs to tow truck driver safety to promoting Maryland wine and grapes.

The fact that Lisanti has been punished by her colleagues and House Speaker Michael E. Busch (D-Anne Arundel) does not automatically endanger her legislation. She is still entitled to present her bills in committee hearings and fight for them on the House floor.

But will she show up for the scheduled hearings? Will her colleagues be inclined to move her legislation? That’s a great unknown. 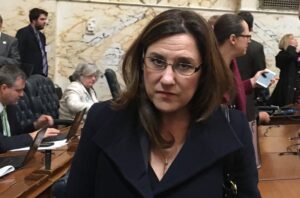 Most of Lisanti’s bills have already been heard. Three more are scheduled for hearings this week. A late-filed bill is going before the House Rules Committee to see if it deserves late consideration and a proper bill assignment.

Here is a look at Lisanti’s bills – and their status – in numerical order:

House Bill 429 would require certain emergency lighting on newly manufactured tow trucks. A hearing has already been held in the House Environment and Transportation Committee.

HB 467 would allow certain slow-moving electric vehicles in the city of Havre de Grace. A hearing has already been held in Environment and Transportation; a companion bill has been introduced by Sen. Robert Cassilly (R-Harford).

HB 549 would allow certain distilleries to sell liquor on premises. A hearing has been held in the House Economic Matters Committee.

HB 550 concerns licensing of distilleries. A hearing has been held in Economic Matters.

HB 551 would lift the limit on the number of farmers’ markets where distillers can sell their product. A hearing has been held in Economic Matters.

HB 645 governs pension payments to disabled retirees. It has gotten preliminary approval on the House floor.

HB 666 would create a nonprofit beer, wine and liquor permit for festivals. It has been heard in Economic Matters.

HB 1020 would set standards for the permitting, installation, and regulation of certain wireless telecommunications facilities. It has already been heard in Economic Matters. A companion bill has been sponsored by Sen. Pamela Beidle (D-Anne Arundel).

HB 1053 would require an individual to assist a first responder if the first responder has suffered serious injury. The bill has been heard in the House Judiciary Committee.

HB 1058 concerns debts and refunds when an insurance policy that uses a premium finance agreement. The bill has not been scheduled for a hearing, though companion legislation has been introduced by Sen. Stephen S. Hershey Jr. (R-Upper Shore).

HB 1059 is the health care facilities bill that was heard in Health and Government Operations Monday.

HB 1069 would establish criminal penalties for individuals who do not report cases of suspected child abuse. A hearing has already been held in the Judiciary panel.

HB 1073 would establish a Joint Committee on Workforce Development within the General Assembly. The bill is scheduled to be heard Tuesday in Economic Matters. A Senate version has been introduced by Sen. James C. Rosapepe (D-Prince George’s).

HB 1158 http://mgaleg.maryland.gov/2019RS/bills/hb/hb1158f.pdf is the Clean Energy Jobs Act [see related story], a marquee piece of legislation with dozens of co-sponsors. A hearing in Economic Matters is scheduled for Friday. A companion bill, sponsored by Sen. Brian J. Feldman (D-Montgomery), is being heard in the Senate Finance Committee Tuesday.

HB 1271 would expand the purpose of the Maryland Wine and Grape Promotion Fund and make grants available to higher education institutions in the state. A hearing is set for Thursday in Economic Matters.

HB 1334 governs the awards and damages individuals can collect from vehicle manufacturers and dealers under certain circumstances. This is the late filed bill now sitting in the Rules Committee; companion legislation has been introduced by Sen. Michael Hough (R-Frederick).