Maryland Attorney General Brian E. Frosh (D) should be doing much more to publicize his investigation of the Baltimore Archdiocese, a leading advocate for clergy sex abuse victims said on Sunday.

And a legislator who has questioned the way Frosh has tackled the investigation has raised new concerns about the resources the state has marshaled to locate victims and prosecute both the priests who committed the abuse and the bishops who covered it up.

Frosh has consistently refused to confirm that he launched an investigation in the wake of a damning report by Pennsylvania’s attorney general in 2018 on sexual abuse by priests, though he did concede in an interview on Thursday the gist of a recent Maryland Matters report about his office’s work.

“It’s not a secret. You know all of this stuff,” Frosh said. “I think the word is out.”

But David Lorenz, Maryland director for the Survivors Network of those Abused by Priests (SNAP), faulted Frosh for his low-key approach to victim outreach.

“I think there ought to be billboards and TV ads looking for victims,” he said. “He could call a press conference and say, ‘I am starting an investigation.’”

As Maryland Matters first reported last week, Frosh has rehired the former head of the AG’s criminal division, Elizabeth M. Embry, to lead the probe of clergy and school sex abuse in Maryland. A hotline has been established for victims to report abuse, though Frosh conceded he has never held a news conference or done an interview to publicize the reporting protocol.

“We’ve tweeted it. We’ve put it on Facebook. We’ve done a press release,” he said. “We may be able to do a better job in terms of outreach on that. We’ll think about it.”

Frosh said that Pennsylvania Attorney General Josh Shapiro (D) told him that “he had over 150 personnel” working on the two-year report describing clergy sex abuse in the Keystone State last August.

That report, an 840-page document that generated national headlines, found evidence of more than 300 “predator priests” and more than 1,000 young victims, though the grand jury overseeing the probe believed the true number of victims to be “in the thousands.”

Asked if Maryland had comparable resources for its probe, Frosh — who had just testified on his office’s fiscal year 2020 budget request — declined comment.

“We’re short-staffed all over the agency. We don’t have enough people to handle the functions that we are supposed to do. And we’re handicapped by the fact that our folks are under-compensated relative not only to the private sector [but also the] federal government and local governments.”

According to Frosh, Shapiro’s investigative team was a mix of personnel from the Pennsylvania AG’s office, the state police and local prosecutors.

“I don’t know how he cobbled it together, but he had many, many people in his office assigned to it.”

Sen. Douglas J.J. Peters (D-Prince George’s), the chairman of the Budget & Taxation subcommittee panel that oversee the AG’s office, said on Friday that if Frosh needs additional funding, he must make the case for it. 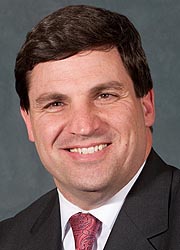 “If [the clergy sex abuse scandal] is his priority, he’s got to tell us how many [positions] he needs and we need to take that action,” Peters said.

“After the [budget hearing], I sat down with Brian and I said, ‘Hey, let’s meet again and tell me what you need from a personnel standpoint.’ He didn’t bring that up, but I’m sure that if we meet, he’ll tell me what he needs, and I’ll be fully supportive of it.”

Added Peters: “Whether it’s that issue or [the] two or three others that he mentioned that day… my job is to help Brian do his job.”

“If it’s a funding issue, then that’s what we need to know as a General Assembly, so we can go on and make this happen.”

He again faulted the AG for his unwillingness to publicize the sex abuse probe.

“People just don’t know. There are victims out there that don’t know that there’s an investigation,” Wilson said. “How is he ever going to find them?”

He continued: “This can’t be a secret investigation. The longer it goes, the more trails get cold… This is a very serious problem.”

Wilson called Pennsylvania’s report “a roadmap for what we need to be doing” in Maryland.

Lorenz said SNAP was warned by an investigator from Frosh’s office last year that communication would cease following their initial briefing, while an investigation was ongoing.

“We’re going to go dark on you,” he quoted the investigator as saying. “You will not have any insight into what we’re doing.”

Now, however, Lorenz is starting to question the silence from the AG’s under-staffed team.

“I’ve been growing more and more uneasy… with the blackout,” he said. “I’m uncomfortable with it. It seems to me they ought to be saying something and letting us know what’s going on.”

“We gave them so much information and we have so much more.”

Victims of clergy sex abuse who wish to contact the attorney general’s investigators can call 410-576-6312 or they can email [email protected].

Advocates optimistic legislation will pass due to support from Sen. William Smith Jr., chair of the Judicial Proceedings Committee.

New Democratic governors with “green” pedigrees in Maryland and Pennsylvania are fueling environmentalists’ hopes of progress during this year’s legislative season.