Maryland lawmakers and community leaders continued to call for the resignation of Del. Mary Ann Lisanti (D-Harford) the morning after she was near-unanimously censured for using a racial slur.

Members of the Legislative Black Caucus, NAACP, democratic central committees of Harford and Prince George’s counties, Jews United for Justice and other groups gathered in the House Office Building lobby Friday morning to encourage Lisanti to resign before next Monday.

Legislative Black Caucus Chair Del. Darryl Barnes (D-Prince George’s) read portions of Lisanti’s statement from a day earlier in which he said she sought to discount the harm of her actions.

The Washington Post reported Monday that Lisanti “told a white colleague, during an after-hours gathering at an Annapolis cigar bar, that when he campaigned in Prince George’s on behalf of a candidate last fall he was door-knocking in a “n—– district.’” Lisanti initially apologized for using the word, but then expressed doubt after Thursday’s censure vote that she had.

Barnes read a portion of her statement, which said someone “heard or thought they overheard an inappropriate word and attributed it to me.”

“To me, that is another case of denial,” Barnes said. “She’s saying that someone thought they heard her, but she’s not saying that she said it. She said before ‘I did say it,’ and now she’s saying I didn’t say it. To me, she sounds like Gov. Ralph Northam. And that is a problem.”

Barnes said Lisanti was, in essence, calling the delegates who were in the room liars.

Del. Jay Walker (D-Prince George’s), who witnessed the comment, said Lisanti’s statements were “starting to become lies going all over the place.” 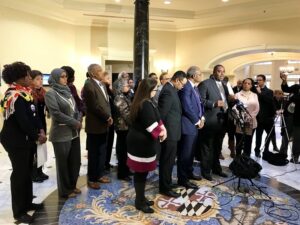 Del. Darryl Barnes (D-Prince George’s) reads from the prepared remarks delivered by Del. Mary Ann Lisanti (D-Harford) after she was censured Thursday in the House of Delegates. Photo by Danielle E. Gaines

Barnes read another portion of Lisanti’s statement, in which, had she been recognized to speak on the House floor Thursday evening, she would have said she was accepting censure for “alleged use of a despicable word. While ever so vile and hurtful, a word. Not an action, behavior or course of conduct.”

Barnes responded: “So she’s saying the word is not something she should be censured for. When she spoke before the Legislative Black Caucus, she said yes I have used these words before. … She said it in such a casual way, where she was not remorseful and she had such a cavalier attitude.”

Since Monday, Lisanti has faced escalating responses to the Post story. She apologized to the Legislative Black Caucus and Democratic Caucus, though attendees said the apologies did not rise to the gravity of the situation. She was stripped of leadership positions and agreed to attend diversity training before Thursday, when she was stripped of committee membership and censured. Lisanti was not on the House floor Friday morning.

Barnes reiterated that Lisanti must resign. He said he hopes she reflects over the weekend and comes in Monday morning to resign. “We have done everything that we possibly can here in the House of Delegates. And we have taken every action we possibly can,” Barnes said. “But one thing we will not do is have someone that is a member of this body use those words. … Those words are not acceptable here.”

Wandra Ashley-Williams, first vice president of the Maryland State Conference of the NAACP, said advocates would continue to arrive in Annapolis to press for Lisanti’s departure.

“This is not Virginia. We are Maryland, and this is not just going to stop at this news cycle. We are here to stay,” Ashley-Williams said. “… We’re serious about making sure that racism doesn’t exist among our elected officials in Maryland.”

Zainab Chaudry, director of Maryland outreach for the Council on American-Islamic Relations, said nearly one-third of registered voters in Lisanti’s district are African-Americans.

“The pain and the heartache that these communities are enduring and that many of us are enduring along with them cannot be absolved with apologies that have been offered due to political pressure,” Chaudry said. “… If our elected representatives cannot respect our existence, then they must be aware that they can expect our resistance.”

Dana Vickers Shelley, executive director of the ACLU of Maryland, said it was wrong for Lisanti to equate use of the N-word with the use of curse words in an initial response to the Post.

“All of Delegate Lisanti’s constituents deserve to have an elected leader who respects them, who values them, and appreciates their humanity,” Shelley said. “She must go now.”

Dea Galloway, a Harford County resident who voted for Lisanti, said the delegate’s comments have required her to teach a tough lesson to her three children, who come with her to the polls on Election Day.