On Friday, House and Senate committees will conduct hearings on legislation that would allow Johns Hopkins University to have armed police officers patrol its campuses, hospital and adjacent areas. Similar legislation was introduced in 2018 but it was withdrawn without a vote in the wake of public and political opposition.

Earlier this week, Maryland Matters senior reporter Bruce DePuyt spoke with Sen. Mary L. Washington (D-Baltimore City) about the measure, which she opposes in its current form. Washington represents the Homewood campus of Hopkins and surrounding neighborhoods. The interview has been lightly edited for clarity and length.

Maryland Matters: Last year’s bill was introduced in the middle of the legislative session. This year’s bill was supposed to have a stronger foundation of support. It doesn’t feel that way so far.

Sen. Mary L. Washington:  It was supposed to go to summer study. And typically, summer study is something that the House and the Senate does. And in a very unusual circumstance, Johns Hopkins conducted its own study and then, interestingly, came up with the very same conclusions that it had proposed last year.

What’s interesting is that they do discuss four different scenarios. And one of the scenarios is to establish a police force under the existing authority of Baltimore City. But that’s not what they’re proposing. So that’s one of the questions I will have Friday during the hearing.

All of the surrounding communities thus far have voted to oppose it. Over 60 faculty have signed a very extensive letter opposing an armed police force that’s private and has jurisdiction over a greater geographic area than just the campus itself. And so there are lots of concerns about the accountability that’s set up, that as a private entity there is no accountability, and that once this authority is given, it is not something that can be taken away.

There are some people who support [this proposal], but my experience has been that people support the idea of being safe. And as researchers, Johns Hopkins knows that it very much depends on how you craft the question. So if you craft the question to someone in East Baltimore and say, “Would you like to see more police officers supporting you?”, the answer is yes. But if you ask a differing question, “Would you like a private entity where their responsibility is not to the public but to its board of trustees and a board that has no fiscal power or no veto power?”, I think most people would say no.

MM: Is there enough support for the bill as drafted for it to advance?

Washington: That’s to be seen. I’m looking forward to the hearing. The bill is called the Community Strengthening Act. And I’m very interested in making that part of this legislation come to fruition, that it truly be about strengthening community in Baltimore City and not simply be a vehicle to extort a private police force on behalf of Johns Hopkins University.

MM: So the bill could be amended in a way that makes it very different from what it is now.

Washington: Absolutely. It could be a very different bill that allows some campus safety functions but also really uses the sweeteners that have been put in the bill to really do what needs to be done. As drafted, there’s a $10 million annual appropriation to a seed fund. One of the challenges with that seed fund is that it would be accessible by a university that has a hospital as well as campuses. So it clearly is a fund for the Johns Hopkins University, so it’s interesting— they get a police force and a $10 million annual appropriation.

MM: Is that money earmarked for public safety?

Washington: There are no requirements on how that $10 million is used. It’s put in as, ‘This is for the community.’ But when you look at the bill, that fund can be accessed by anchor institutions, of which Johns Hopkins University is one and there are any number of institutions. 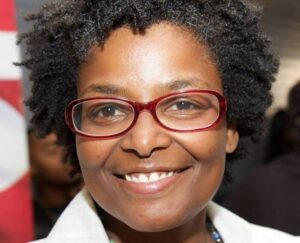 The other piece of incentive that’s in the bill is $3.5 million for our YouthWorks [summer jobs] program and then another $1 million for the Baltimore Children and Youth Fund. But what’s interesting about that is whereas the $10 million appropriation is forever, the $4.5 million is only for four years. And not anything to the actual local communities that are impacted by this change.

And then finally, there is a plan that looks to me to be very similar to the plan that the Baltimore City administration had put forward to establish a [police] training facility at Coppin University to create a cadet training program and to have $2,000 stipends for young people who participate.

Again, there is a range of opportunities that we could be looking at. Did the communities ask for a cadet program? I’m not saying that this isn’t good. But is that truly all that is needed? There are many other organizations — maybe Cease Fire, maybe Safe Streets. I know in my own district, the Woodbourne Community Association does a tremendous amount of work with the young people in their community. How wonderful it would be if there were impact funds available for them.

So the ‘community strengthening’ part of the bill I absolutely want to get passed. But we really need to take a step back when we’re talking about giving a private authority police powers in the State of Maryland. It’s not simply about Hopkins, it’s about what precedent is this setting for other corporate entities that operate and claim that they need to have safe streets. It shouldn’t be the case that the only way that in Maryland that one can be afforded good quality policing is for them to pay for it directly, outside of their taxes, and that’s my concern.

MM: So you clearly envision a much different structure, with more traditional accountability, than what is in the bill now.

Washington: And that it remain a public function. Because what this is doing is allowing Hopkins to buy police powers. They’re not simply acting to have the same powers as Morgan State or other universities have. Because they don’t operate off their campuses. They’re acting to be on par with the Baltimore Police Department. That’s what this bill says. So no matter what people are thinking, this bill as drafted would give them direct state authority to operate at the same level as a municipality or other public entity. And that’s not something we should be doing in the State of Maryland.

MM: And you think the community benefit pieces should be done with greater consultation with impacted communities?

Washington: Yeah. And there’s been no polling of that. Again, this bill was drafted by the government relations persons of Johns Hopkins. They didn’t confer with any of us or of any communities about how to actually draft the bill. The chair of our delegation put it in on behalf of the City of Baltimore, but as I read it, it’s exactly what the draft amendment was that Hopkins had on its website. So there’s been no conferring or working with any other entity except forwarding its own agenda in this bill.

They have not learned their lesson from last session. They continue to use the power they have as an economic entity, as a political entity, as a health care entity, to push its agenda. And that is my very fear, that adding on top of that full police powers — even though maybe there might be some limitations here and there — that the ability for any accountability is just outside of the financial capabilities of any community association or any individual.

It’s akin to establishing a Vatican City within Baltimore, with its own army, its own laws. We should all be partners in addressing our problems with public safety, and this bill is not it.

With parts of Baltimore under boil warning, advocates push for improvements to city’s water system

One day after Baltimore officials informed residents that E. coli spread into parts of the city’s water system and issued a boil-water advisory, advocates…