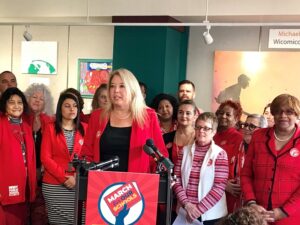 Cheryl Bost, president of the Maryland State Education Association, speaks at a press conference for the March for Our Schools on Wednesday in Annapolis. Photo by Danielle E. Gaines

Maryland teachers plan to make a statement as part of the “Red for Ed” movement, but they won’t be striking or walking out of classrooms. Instead, they’ll flood Annapolis for the March for Our Schools on the second Monday of March.

Cheryl Bost, president of the Maryland State Education Association, said teachers, administrators and school support staff will board buses in every county of the state on March 11, bound for Annapolis.

They will call for lawmakers to pass a fiscal 2020 budget in line with recent recommendations of the Kirwan Commission, including a $325 million increase in education spending next year to begin implementing the commission’s far-reaching policy changes, as well as a promise to increase the 2021 education budget by $750 million. Education advocates also will demand by the end of the 2020 legislative session a new education funding formula, the creation of which was the Kirwan Commission’s initial charge two years ago.

“We were supposed to pass a new funding plan in 2018. And then it got kicked to this session. Now it’s been kicked to next year,” Bost said. “The delays must stop. The message is simple: our kids can’t wait.”

The march in Annapolis, expected to draw 5,000 attendees, follows major demonstrations in other states over the past year including California, West Virginia, Oklahoma and Arizona. Teachers in Denver, Colorado, are currently demonstrating for better pay and increased school funding.

Advocates from all corners of education in Maryland will come together to speak with one voice, Bost said.

“We echo the calls of our colleagues from around the country to a new commitment to the next generation of our country,” she said.

New governor was circumspect on the campaign trail, referring obliquely to challenges facing the state without directly attributing problems to his predecessor.

In an emailed letter to school community, Goldson notes “there is a clear divide of philosophical beliefs” on the school board.