The city of Annapolis needs a raise, according to House Speaker Michael E. Busch and other members of the Anne Arundel County General Assembly delegation.

Each year, the city provides traffic control and security for rallies (49 of them in the 2018 fiscal year), responds to emergency calls at buildings within the capital complex (262 times in 2018), and has specialized teams such as a bomb squad and hazmat unit that might not otherwise exist in a city of 40,000 people, Mayor Gavin Buckley said Tuesday.

And while the city is privileged to be the seat of state power, the costs can add up.

“That privilege brings with it economic activity and support for our small businesses, but it also brings costs to the city that we would not incur if we were not the state capital,” Buckley said.

The direct cost of police services to the capitol complex in fiscal 2018 was about $200,000, Buckley said. The fire department’s specialized bomb and hazmat teams cost about $461,000 that year. At the inauguration of Gov. Lawrence J. Hogan Jr. (R) last month, the city was a lead partner in planning and operations at a cost of about $40,000.

“Which was a splendid event, by the way. Thank you,” Buckley said.

He and Busch (D) testified together Tuesday before the House Appropriations Committee, seeking a boost to the state’s payment-in-lieu-of-taxes, or PILOT, payment to the city for the costs of providing services. House Bill 129 would set the payment at a minimum $750,000 each fiscal year starting in 2022, with an annual increase guided by the Consumer Price Index.

A fiscal analysis by the Department of Legislative Services found that records regarding the state’s payments to the city are incomplete. In 1980, the state paid the city $90,000 for fire, police and garbage services, but that grant was reduced when the city discontinued commercial trash collection.

Funding increased to $367,000 in 1996, but has remained at that level through the current fiscal year. Hogan’s proposed fiscal 2020 budget doesn’t include any payment to the city from the state.

Busch said his staff and the city worked all summer to identify a fair compensation level for the city’s direct and indirect costs for providing service to the capitol complex.

“I think it gives stability to the city government so they can budget appropriately without having to wait for the governor to make a decision about whether to put money in or not,” Busch said. “This is the first time in my 33-year history here that the governor didn’t put anything into the budget for the city of Annapolis. Now, personally, I think that’s unconscionable.” 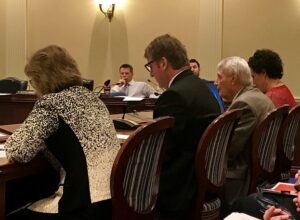 The city has regularly made requests for increased funding. Former mayor Mike Pantelides requested a payment of more than $1 million two years ago.

In written testimony to the committee, Hogan’s Department of Budget and Management said mandated spending passed by the General Assembly “frustrates the administration’s ability to achieve structural balance.”

“DBM is focused, not on the underlying policy proposal being advanced by the legislation, but rather on whether the increased spending is sustainable,” reads the testimony submitted by Barbara Wilkins, the department’s legislative liaison.

The testimony says that 70.7 percent of the fiscal 2019 spending is for mandates.

“Until we achieve long-term structural balance, programs cannot rely on a consistent funding level,” the department writes. “Constituencies for these proposed programs or enhanced spending bills should be forewarned that passage of this legislation does not guarantee future funding.”

“I’ll provide that for your chief of staff,” McIntosh told Busch. “She’ll find that very interesting.”

Legislative leaders have grumbled since 2015 that the Hogan administration provides insufficient testimony on bills under consideration. Lawmakers and the governor also have clashed this year over Hogan’s budget proposal, which nonpartisan legislative analysts say is not structurally balanced to the tune of $62 million, while Hogan’s office argues that the proposal is structurally balanced.

The state owns 19 buildings in the city with 1.8 million square feet and a parking garage with 720 parking spaces, according to the Department of Legislative Services.