Andrea Chamblee has replayed the last day she spent with her husband over and over.

It was last year.

Although it was early in the day, her husband, journalist John McNamara, was already tired. He had stayed up late working on a voters guide for the Capital Gazette, where he served as an editor.

She remembers asking if he could work from home. No, he said. Too much to do.

What she can’t remember is whether she followed him to the car to give him a second kiss goodbye — or whether she just dreams that she did.

Later that day, McNamara and four other members of the Capital staff were slain when an armed man — a local known to law enforcement — walked into the newspaper’s Annapolis offices and opened fire.

“I lost my husband to a man with three restraining orders and a history of online threats,” Chamblee told reporters at a Moms Demand Action rally and press conference Thursday. “I want you to be able to kiss your family members goodbye knowing that you’ll see them again.

“I want us to be able to take gun safety for granted. Let’s make sure our legislators want that too,” she said.

Many of the people listening to Chamblee tell her story wiped away tears as she spoke.

She was one of several gun violence survivors to speak at an Annapolis lobby day organized by Moms Demand Action, an organization formed in the wake of the 2012 shooting at Sandy Hook Elementary School in Connecticut.

More than 400 members of group’s Maryland chapter traveled to the capital to participate in a rally. They then grabbed materials offering advice on how to engage state legislators (Do: “Ask directly for support of your position.” Don’t: “Confront, threaten, pressure or beg.”), before heading toward House and Senate offices in small groups of activists clad in red T-shirts.

Also addressing the rally was Denise Reid, a Baltimore mother whose 23-year-old son Tavon was fatally shot in 2006.

Moms Demand Action is trying to build support for two measures lawmakers expect to introduce before next week’s filing deadline. 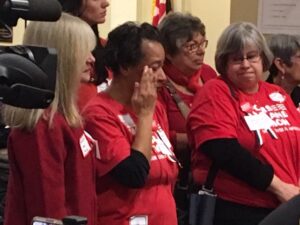 An audience member wipes away tears as Andrea Chamblee talks about her husband’s murder at a rally in Annapolis on Thursday. Photo by Bruce DePuyt

The other measure would extend the background check requirement that currently exists for handgun sales made by unlicensed sellers to cover rifles and long guns as well.

“We may be the first in the country to say, ‘You can’t create a gun on a printer,’” House Majority Leader Kathleen M. Dumais (D-Montgomery), the sponsor of the first bill, said.

“We are going to attempt to get ahead of this issue in Maryland and be a national model,” said Sen. Will Smith (D-Montgomery), another speaker.

The bills are still being drafted, lawmakers said.

Legislators and organizers said 2018 was a successful year for gun-safety advocates in Maryland.

The General Assembly approved and Gov. Lawrence J. Hogan Jr. (R) signed several measures they wanted, including a ban on bump stocks and a “red flag” provision allowing law enforcement to seize guns owned by people judged to be a threat to the community.

But there is more work to do, the group’s Eric Greynolds said.