Gov. Lawrence J. Hogan Jr. (R) will begin his second term much as he spent his first, drawing a contrast between Maryland’s approach to divided government and the dysfunction in Washington, D.C., where an impasse over border security has led to the longest federal government shutdown in U.S. history.

He will preach, as he often has, the virtue of “disagreeing without being disagreeable,” holding up his state as a place were “bipartisanship” and the pursuit of “common-sense solutions” are what the public both wants and gets.

Though he is a Republican in a state dominated by Democrats, countless polls have found that Hogan is among the nation’s most popular governors. The most recent survey again found him second, behind fellow Republican Gov. Charlie Baker of Massachusetts – another Democratic stronghold.

An easy reelection winner in November, propelled by consistently high job-approval numbers and a mountain of campaign cash, Hogan will take the oath of office Wednesday at noon, in the Senate chamber. He will then take the oath a second time, ceremonially, an hour later, on a makeshift platform on the east side of the State House grounds.

To underscore the theme of bipartisanship, former Montgomery County Executive Isiah Leggett, who once served as the head of the Maryland Democratic Party, will offer welcoming remarks, while former Florida governor and onetime presidential hopeful Jeb Bush (R) will introduce Hogan.

The oath will be administered by Mary Ellen Barbera, the chief judge on the Maryland Court of Appeals, the highest court in the state. The ceremony will also include a 19-gun salute and an A-10 Formation Fly-Over, at approximately 1:08 pm, which is expected to rattle windows in the Annapolis area.

Hogan’s reelection campaign was light on second-term details, the governor saying only that four more years would bring “more of the same.” The efforts by Hogan and the state Republican Party to boost GOP numbers in the state Senate, to make it more difficult for the legislature to override his vetoes, bombed – a victim, Hogan suggested, of President Trump’s enduring unpopularity in the state.

Because of a lengthy utility project on Lawyer’s Mall, in front of the State House and next to the governor’s mansion, the ceremony is being held on the east side of the capitol grounds. Though prior inaugurals, including Theodore McKeldin’s in 1951, were held on the south side of the building, the original front of the structure, this is said to be the first time that the east grounds have been used. (McKeldin was the last Republican governor in the state to win a second term.) 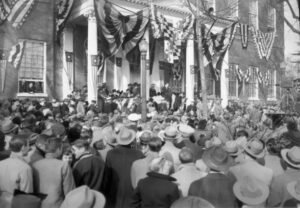 Theodore McKeldin’s 1951 inaugural, at the original front of the state capitol. Gov. Lawrence J. Hogan’s inauguration will be the first to be held on the east side of the State House grounds. Maryland State Archives photo

Bleachers have been set up on State Circle, part of which is closed at least through Wednesday.

Hogan will make two major speeches this month — his inaugural address on Wednesday and his State of the State address on Jan. 30. In between he is scheduled to unveil his budget proposal, which will officially be released on Friday.

The first speech is more likely to offer broad themes about governing, while the second will focus more on the specific pieces of legislation Hogan hopes the legislature will pass between now and April.

In July Hogan officially becomes chairman of the National Governors Association, a post that will put him in more regular contact with the national media. Given his popularity and his willingness to criticize President Trump, Hogan is now being mentioned as a potential GOP leader beyond Annapolis.

His words and tone on Wednesday will be carefully scrutinized for signs he may be open to such suggestions.

Hogan is expected to speak for about 20 minutes.

Also taking the oath for the second time is Lt. Gov. Boyd K. Rutherford (R), whose speaking schedule and profile have increased of late – stoking speculation that the longtime government technocrat may be interested in trying to succeed Hogan in 2022. Rutherford will speak for approximately 10 minutes.