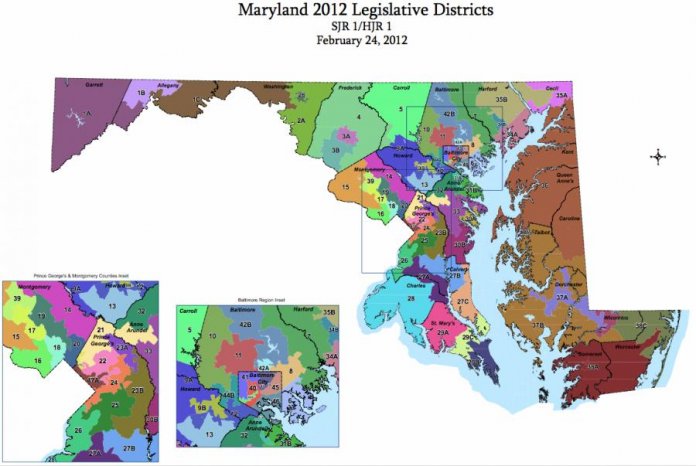 Gov. Lawrence J. Hogan Jr. (R) and legislative Republicans are intensifying their efforts to reform the way congressional and legislative district boundaries are drawn in Maryland.

Hogan continues to make nonpartisan congressional redistricting a top priority. He’s once again introducing a bill that would put congressional and legislative map-making into the hands of a nonpartisan commission, taking the once-a-decade responsibility away from partisan politicians. Year after year, that effort runs into a Democratic brick wall.

And Hogan this week has introduced legislation requiring the House of Delegates to have single-member districts, instead of the customary three members per district.

The moves by the Republicans come as the U.S. Supreme Court prepares to hear a challenge to the constitutionality of the state’s 6th congressional district as currently drawn. At Hogan’s direction, a commission is working to come up with a proposal for new district lines in time for the 2020 election, but it’s not clear whether the Democrats, who control both chambers of the General Assembly, will act on it before the scheduled end of the legislative session on April 8.

While Maryland’s gerrymandered congressional map, which currently gives Democrats a 7-1 advantage, generates plenty of controversy and public attention, Republicans in Annapolis have long groused that the state’s system of three delegates per legislative district – which provides map-makers the discretion to carve those districts into smaller subdistricts – also gives the Democrats an unfair advantage. GOP lawmakers have occasionally introduced legislation to change the system. But this is the first time Hogan has introduced a bill of his own.

With the legislative lines, Democrats “have not gone to the Baroque extremes of the Maryland congressional map,” said Walter Olson, a senior fellow at the Cato Institute’s Robert A. Levy Center for Constitutional Studies who is co-chairman of both Hogan’s redistricting reform commission and the commission proposing new boundaries for the 6th congressional district. But three-member districts, he added, reflect “the self-interest of those who draw the maps.”

Amelia Chasse, a spokeswoman for Hogan, did not respond to a request for comment on the governor’s legislation this week.

But Republicans have long argued that the flexibility to draw three-member legislative districts with the option of smaller subdistricts enables Democrats to squeeze a few extra seats out of their majority.

House Minority Leader Nicholaus R. Kipke (R-Anne Arundel) said his caucus isn’t just on board with the legislation – 34 House Republicans have co-sponsored the bill, along with 14 Senate Republicans; Kipke said the Maryland GOP is also thinking about challenging the multi-member districts in court.

“We believe strongly that it violates federal law,” he said.

Maryland’s multi-member House districts appear to have their genesis in the 18th century, when each county sent four delegates to Annapolis, and the cities of Baltimore and Annapolis were each accorded two delegates. The system has been tweaked through the years. The state’s current set-up – 47 legislative districts, each with one senator and three House members – was put in place in the early 1970’s.

Kipke said the lack of consistency from district to district – most have three members representing the same territory, while others are carved into two or even three subdistricts – works to the majority party’s advantage. Would creating single-member House districts create more opportunities for Republicans, who currently face a 99-42 seat deficit in the House?

“We never did the math,” Kipke said. “Maryland is a difficult state for Republicans no matter what.”

In private conversations, Democratic operatives suggest a single-member district scheme might lead to a five-seat GOP pickup in the House. But Del. Eric Luedtke (D-Montgomery), chairman of the House Democratic Caucus, said the caucus is unlikely to take a formal position on Hogan’s legislation.

Which doesn’t mean that the governor’s bill is going to pass. Most Democrats are likely to oppose it. Luedtke said he likes being a part of a three-member team, given the different priorities and committee assignments of his District 14 colleagues.

“I think I’m more effective because I have a three-member district,” he said.

But not every legislative delegation works cooperatively together — illustrated by the state’s recent charges against a former chief of staff to Del. Richard K. Impallaria (R-Baltimore County) for allegedly setting up a misleading robocall last year against House Minority Whip Kathy Szeliga (R), who represents the same district.

Meanwhile, Republicans are seeking a legislative remedy for another aspect of congressional redistricting in Maryland that they dislike. They have introduced a bill that would call for a ballot initiative creating a change in the state Constitution governing the way congressional lines are drawn.

Sen. Edward R. Reilly (R-Anne Arundel), sponsor of the Senate version of the bill, said that in contrast to state laws governing legislative redistricting, there are almost no guidelines for state policymakers to draw congressional boundaries, other than the nationwide requirement that each district must be as close to identical in population as possible.

The bill would mandate that guidelines for congressional map-making more closely adhere to the guidelines for legislative districts, with due regard for boundaries, compactness, and commonality of populations.

Reilly and several Anne Arundel County officials are irked that the county has had four congressional representatives for the past few decades – meaning, in their view, that no one member of Congress is strictly focused on the county’s needs.

Like so many Republicans – and political reform groups – Reilly was sharply critical of Maryland’s 3rd congressional district, considered one of the most heavily gerrymandered in the county.

Ahead of Rally for Jan. 6 Riot Defendants, Fences Return Around U.S. Capitol