Prince George’s County Executive Angela D. Alsobrooks (D), dressed in a crisp dark suit, sat down at the conference table in the Annapolis office of the county government at 9 a.m. Wednesday, with three top aides in tow. She opened a glossy brochure, folded her hands, and began talking to reporters with great dispatch about her county’s priorities for the 2019 General Assembly session.

At exactly 9:30, Alsobrooks stood up, hustled to a breakfast with the county’s legislative delegation, and an hour later was holding a formal news conference with the lawmakers outside the State House, pledging harmony and teamwork.

A couple of hours later, Montgomery County Executive Marc B. Elrich (D), dressed in black slacks and an ancient tweed jacket, was leaning against a marble wall in the vestibule by the State House staircase, talking to one of his predecessors, Sidney Kramer, whose son, Benjamin F. Kramer, was just sworn in to the Senate.

To say there are stylistic differences between the new county executives of the state’s two largest jurisdictions – neighbors that border Washington, D.C. – would be the understatement of the decade. And yet, it was instructive to watch Alsobrooks, 47, and Elrich, 69, in their maiden voyages to the State House as county executives, marking the first day of the 2019 General Assembly session.

As is so often the case for leaders of Prince George’s County, an Annapolis session is an exercise in the search for money and respect. Prince George’s never feels like it’s getting a fair shake from the state, and politicians there are painfully aware of the relative abundance of its neighbors – and of the assistance the state routinely gives to Baltimore City.

“We just want to make sure that Prince George’s County gets its share,” Alsobrooks said. “And to be honest, I don’t know why we have to beg for it.”

Education and school funding top this year’s priority list, as they always do. The county is also looking to expand its youth sports programs, address transportation needs, fight crime, and promote economic development.

Alsobrooks was quick to say that her predecessor, former executive Rushern L. Baker III, laid a solid foundation from which she could build.

“When Rushern came down here [to Annapolis] in 2010, there was a stench of corruption and crime” in the county, she said.

Alsobrooks’ office has put together a neat brochure outlining the county’s top priorities. She praised Prince George’s senators and delegates, noting their power and influence in their respective chambers. That theme of teamwork was emphasized frequently in the subsequent news conference she held with members of the delegation.

“We have one of the most talented delegations we’ve ever seen,” Alsobrooks told reporters.

The new county executive is an object of wonder in Maryland political circles, a celebrity. She got, to my ears, the lustiest applause of anyone introduced at the Maryland Democratic Party luncheon in Annapolis on Tuesday.

Her star power is undeniable, and the political junkies who already can’t wait for 2022 put her very close to the top of the list of potential candidates for governor.

Alsobrooks is having none of the hype. And she is clearly following the very sage advice that to do well politically, you have to do good. She is focused on the job at hand, and refuses to be distracted or drawn into a discussion about her political future – at least at this early stage.

Elrich is a different breed of cat entirely.

By his own admission, he never really planned to be where he is now.

“Fifty years ago, my friends and I talked about blowing up the government,” the former student radical mused. “Now I’m running the government.”

There was no news conference for Elrich in Annapolis Wednesday. No glossy brochure. No pep rally with the members of the Montgomery County legislative delegation.

“That’s not my style,” Elrich shrugged.

In fact, Elrich does not have a public information officer yet.

But he does get around, and he does know people. In the State House, Elrich and Baltimore Mayor Catherine E. Pugh (D) greeted each other warmly.

“Keep me in your universe and tell me what you need,” Elrich told her. 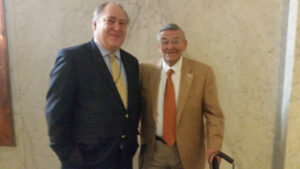 Montgomery County Executive Marc B. Elrich (D), left, chats with one of his predecessors, Sidney Kramer, at the State House Wednesday. Photo by Josh Kurtz

Like any seasoned pol, Elrich made the rounds of Opening Day lobbying firm and special interest parties in Annapolis Wednesday. Melanie Winger, Montgomery County’s longtime government relations director, who chaperoned Elrich at the receptions, said he knew “someone in every room.”

Elrich plans to meet with the Montgomery County legislative delegation on Jan. 18. He has told the county’s lawmakers that he will come to Annapolis as often as they find it helpful and plans to be there at least once or twice a week during the three-month Assembly session.

Elrich met one-on-one for the first time with Gov. Lawrence J. Hogan Jr. (R) on Tuesday – a meeting I would have paid to witness. I can’t think of two Maryland government leaders who are more different. And yet, both are adults, in the political sense of the word, and Elrich said it was a productive session.

“We both agreed that all the politics [of 2018] are over,” he said. “We played our roles. Now it’s time to govern. I don’t go in there throwing bombs.”

Elrich said the prime topics of conversation were transportation, education and the county’s desire to boost its mental health services. Elrich has been critical of aspects of Hogan’s proposal to widen the Capital Beltway and Interstate 270 and has been preaching the concepts of reversible lanes on certain highways and county roads and bus rapid transit as a viable mode of transportation. Hogan, he said, was receptive – and Elrich believes the two can find common ground.

“It was totally cordial,” Elrich said. “I’m acknowledging that at least he’s trying to solve the problem.”