For the past 20 years, Maryland Democrats have held a rally and luncheon on the day before the General Assembly convenes in Annapolis.

Tuesday’s gathering of more than 300 party officials, activists, lobbyists and others was no different — except the main focus this time wasn’t so much on the issues that state leaders will tackle in the next 90 days. Instead, it was on the impasse in Washington, D.C., that has left 800,000 federal workers, many of them Marylanders, on furlough or working without pay.

“I’m angry — and I hope you are — that this shutdown is taking place,” Maryland’s senior senator thundered. “This is disastrous.”

With the House of Representatives, now in Democratic control, set to pass out agency funding bills one by one this week, Cardin (D-Md.) was one of several speakers to encourage efforts to pressure U.S. Senate Majority Leader Mitch McConnell (R-Ky.) to bring up the measures as well, something he has pledged not to do unless President Trump indicates ahead of time that he will sign them.

Not good enough, said the Democratic lawmakers at the luncheon.

“There is no excuse for government not being open,” Cardin boomed. “You don’t hold the American people hostage. … This is outrageous, and we all need to speak out.”

“Democrats stand for border security,” he said, a line other speakers would echo. “But we don’t stand for wasting money and building a wall that’s only offensive to our southern neighbors.” 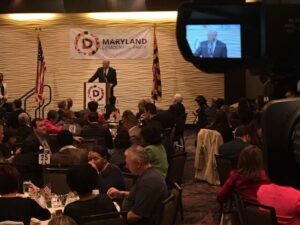 House Majority Leader Steny H. Hoyer, who has participated in a recent series of meetings with Trump, said the president is unwilling to compromise, a claim that Vice President Mike Pence and other administration officials have made, in turn, about Democrats.

First elected to the state legislature in 1966 and to Congress in 1981, Hoyer (D-Md., 5th) sounded an urgent warning about the president’s conduct.

U.S. Rep. Adam Schiff (D-Calif.), a frequent Trump critic, said in his keynote remarks that the president’s actions and rhetoric are emboldening dictators around the globe and eroding America’s voice as a champion for freedoms.

He said that countering the president is “an incredible challenge.”

“Our goal is to get back to number one” in the nation in education, he said, pledging to “take control of the recommendations of the Kirwan Commission,” which has been meeting for two years — and will meet for a third — to devise a plan to fund K-12 education more robustly.

Busch also pledged to continue to improve the state’s health care system, which was shored up in 2018 through the implementation of a reinsurance program.

“If the Senate and House will work together, we will drive policy for the next four years,” Busch said. “If the administration can divide us, it’s going to be unfortunate.”

The luncheon and rally served as a coming-out party, of sorts, for Maya Rockeymoore Cummings, the newly elected chairwoman of the Maryland Democratic Party.

Among the attendees was Kathleen Matthews, the former chairwoman who was defeated by Cummings in a vote of party leaders in December. Cummings praised Matthews for her leadership, a sentiment that was echoed by another speaker, her husband, Rep. Elijah Cummings (D-Md.).

“We needed a leader at a pivotal moment,” he said of Matthews, who took over the party after Larry Hogan (R) upset Anthony Brown in the 2014 race for governor. “You came in and you made our dreams your dreams. And we thank you. Thank you for doing an excellent job.”

Meanwhile, the governor, in Baltimore on Tuesday to announce new initiatives to address violent crime in the city, addressed the federal government shutdown, saying he has been trying to work with leaders on both sides of the aisle on the issue.