PRINCE FREDERICK, Md. — In some ways, Jamie Tiralla and her family represent farming’s past and future.

Tiralla, 36, grew up in rural Calvert County, Maryland, but didn’t know anything about farming. Her husband’s family, meanwhile, has had its hobby farm for nearly a century.

They moved onto the rolling, 115-acre farm 12 years ago, immediately after celebrating their wedding reception in a barn on the property.

“When he said he wanted to move to the farm and start farming, I was wholeheartedly supportive, but I didn’t have any idea what it meant,” Tiralla said recently.

And if the young couple hadn’t had Benson Tiralla’s family land, they might have chosen to do something else entirely.

Access to affordable land is a chief barrier across the country for young farmers, especially those who are new to agriculture and lack the resources and institutional knowledge of those who grew up on family farms they may inherit. 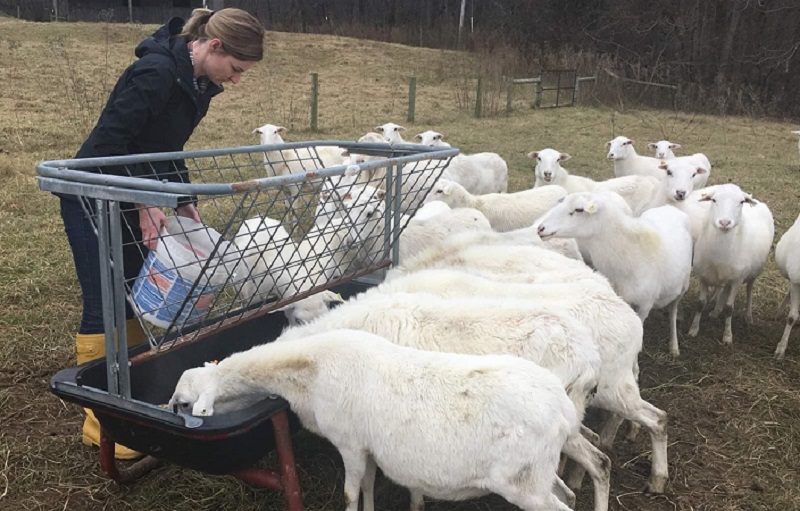 Jamie Tiralla feeds her St. Croix sheep that crowd around the container for food. The Pew Charitable Trusts photo

Young farmers such as Tiralla are in the minority as America’s family farmers have been graying for 40 years.

Since 1978, the share of principal farm operators who are 65 and older has grown, according to the USDA Census of Agriculture. Meanwhile the share of younger farmers has declined.

Just 4 percent of America’s family farms have principal operators younger than 35, while nearly a third are led by someone age 65 or older, according to the U.S. Department of Agriculture’s 2012 Agricultural Resource Management Survey. The average principal farm operator in 2012 was 58 years old.

Facing high farmland prices and a capital-intensive industry, farmers younger than 40 are at a unique disadvantage in becoming the next generation of landowners.

One-tenth of America’s farmland, or 91.5 million acres, is expected to have changed hands between 2015 and 2019, census of agriculture data shows. In the Northeast, Plains and West, a larger share is expected to be transferred than in other regions.

“Pack on to that difficulty with student loan debt and lack of experience,” he said, “and you’ve got some significant structural barriers to getting young people in.”

Many young farmers are new to the agriculture industry. They didn’t grow up as “farm kids,” raised on family farms and among elders who passed down knowledge collected over generations. In states like Rhode Island, which has the country’s most expensive farmland at $13,800 an acre, it’s tough for young, landless farmers to compete.

But young farmers are helping themselves through advocacy, entrepreneurship and innovative practices. They pushed for recognition in the federal farm bill, which tends to be geared toward large-scale commodity producers.

Congress passed the bill recently and President Donald Trump signed it into law Dec. 20. Advocacy groups representing young farmers say they aimed for a bill that increases funding for farmland access and conservation.

The farm bill compromise includes those provisions, increases funding for training, and establishes a beginning farmer and rancher coordinator in each state.

Young farmers also are sharing resources through their organizations and promoting agriculture education, which Tiralla, former vice president of the Calvert County Farm Bureau and former chairwoman of the Maryland Farm Bureau Young Farmers Committee, said will be a primary focus for the group’s young farmers committee in 2019.

The summit highlighted a range of agriculture opportunities. Tiralla, a leader in the Maryland Farm Bureau who owns the marketing company All Ag Media in addition to working the family farm, helped organize the daylong event.

“No matter how good of a farmer you are, you can’t be successful if you’re not part of a community,” Tiralla said.

Value-added agriculture increases the economic value of a raw agricultural commodity by altering its form, such as making cucumbers into pickles.

The summit counted agritourism — all those corn mazes and pick-your-own operations — in its definition.

The summit also pushed innovation through a “Shark Tank”-style pitch competition for entrepreneurs. MADTECH, a Huntington, Maryland, company that won $7,500 in the contest, operates drones that allow farmers to survey crops and monitor their land.

It boasted that its technology provides real-time remedies to save fertilizer and relieves farmers from canvassing fields with pencil and paper in bad weather.

That’s the kind of value-added business that attracts the next generation of agriculture managers. The drone presentation was 14-year-old Jenna Seiss’ favorite thing she saw at the summit.

“I liked how they said that it could measure the soil and if it’s bad or not,” said Seiss, a ninth-grader at Smithsburg High School in Smithsburg, Maryland. “A lot of farmers, they don’t really know the source of the problem and drones really help solve it faster.”

Seiss was among the six high school students agriculture teacher Lee Ruark brought to the summit. Ruark said he knows his students won’t become farmers, so he aims to instill a passion for agriculture.

Seiss helps on her grandfather’s cattle farm but has not yet landed on a profession. She’s torn between becoming a doctor and a veterinarian.

Agriculture is very different than it was when Ruark, 48, grew up on his family’s poultry and cattle farm in Princess Anne, Maryland. Back then, he recalled, family farms were more common.

Ruark left home in 1988 to study agriculture at Virginia Tech with plans to return home and manage the farm. But by the time he graduated, his parents had filed for bankruptcy. The farm was gone.

Of his six immediate neighbors who were farmers when he was growing up, only one remains on their farm, Ruark said. His family losing the farm prompted Ruark to pivot and became an agriculture educator instead.

Wineries, craft breweries and distilleries are growing, while younger industries such as agritourism are expected to expand, according to a study by the Business, Economic and Community Outreach Network at Salisbury University, known as BEACON, and commissioned by summit organizers Grow & Fortify.

“For people who earn their living from Mother Earth, one way or the other, value-added agriculture doubles their take-home pay on the average,” BEACON founding director Memo Diriker, who presented the study’s findings, said in a telephone interview. “That’s good for them and that’s good for the state, because that money churns the economy.”

Marshal Cahall, a 29-year-old grain farmer on Maryland’s Eastern Shore, learned the importance of business diversity in agriculture as a teenager.

He recalled his family losing money on its dairy farm for three consecutive years before selling their milk cows and making farming a second source of income.

The experience didn’t dissuade him from entering what he described as a “tradition-based business.” Instead, he said he’s open to different opportunities, whether they’re in farm-based entertainment.

“Let’s face it: We can’t all be 10,000-acre farmers,” Cahall said. “It’s about finding your way to be successful as a member of the agriculture community, finding a way to a successful business model, and I think that’s going to be different for everyone.”

Cahall has benefited from one of several programs that help young farmers access land and incentivize older farmers to share their resources. He purchased a 171-acre Maryland farm through a USDA Farm Service Agency loan, often an entry point for beginning farmers. 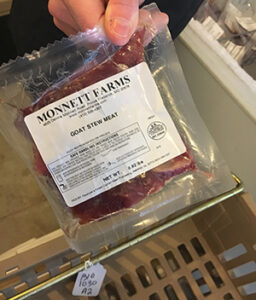 The National Young Farmers Coalition pushed for the farm bill to increase support for the USDA Conservation Reserve Program’s Transition Incentives Program. The program offers money to retired or retiring landowners who sell or rent the land to a beginning farmer or rancher or a member of a socially disadvantaged group.

Bahrenburg of the farmers coalition said the group is pleased the compromise farm bill increases program funding to $50 million annually and directs up to $5 million for outreach and technical assistance for beginning farmers and eligible landowners.

Since it began, Next Gen, as the program is known, has invested nearly $3.5 million in nine conditional purchases in six Maryland counties. The program is geared toward beginning farmers, defined as people who don’t own a farm or ranch or own less than 20 acres.

In addition, eligible farmers must not have operated a farm or ranch as a principal operator for more than 10 years, and must have at least one year of farming experience and expect to be highly involved in the operation.

Young and beginning farmers can receive up to $500,000 for a down payment at a real estate transfer settlement. The farmer then has seven years to sell the permanent conservation easement on the farm to a rural conservation program. If that doesn’t happen, the easement is granted to a statewide or local farmland conservation program or rural land trust.

Participants are required to buy at least a 50-acre parcel, unless their land is next to an already preserved property. The program doesn’t benefit farmers who can afford only smaller parcels. “That’s one area where we have a void right now,” said Stephen McHenry, MARBIDCO executive director.

McHenry recently met with USDA officials to seek funding for Next Gen properties smaller than 50 acres.

“My dream has always been to have a policy-supported sweat equity arrangement,” said Kathleen Merrigan, executive director of the Swette Center for Sustainable Food Systems at Arizona State University. “A new farmer would be coupled with an old farmer, and they would build equity in the farm through some period of years while they’re learning the ropes, which would be a risk mitigation strategy for everyone involved. But we don’t really have those mechanisms.”

Rhode Island is starting a program to buy farms and sell them to farmers at a lower cost, although the state retains development rights.

Should Tiralla’s children, ages 8, 6 and 3, take over the family farm, they’ll continue a long local history. Their ancestors arrived in Calvert County in the 1700s. 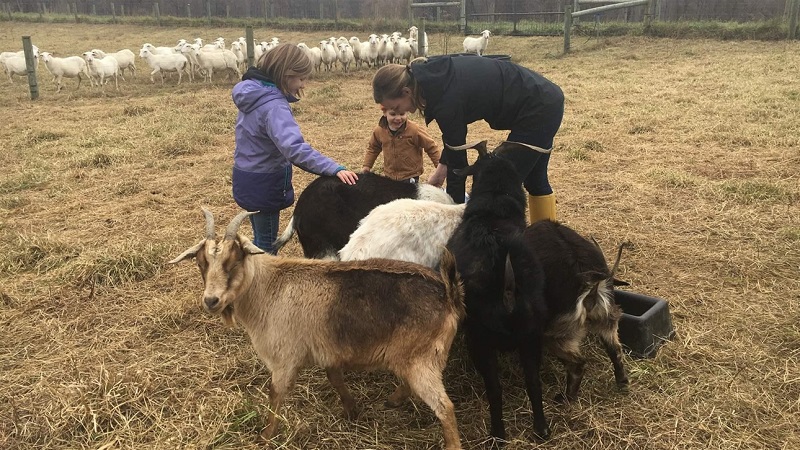 Their days begin in the two-story Cape Cod house that was gifted to their father’s great-grandmother in 1920. The children roam freely, careful to stay a safe distance from a native azalea bush their great-grandfather planted next to the house for his mother.

On a recent morning, Tiralla got her elder children off to school, and Isaac to her in-laws, who live on a 35-acre farm next door. She fed the 60 breeding ewes and dozen goats. About 16 cows grazed in the distance.

Weekends are spent helping to feed the animals and making farm rounds with their father. Isaac, 3, often runs into the middle of the herd of sheep and giggles when they scatter. Caroline, 8, and Henry, 6, do their homework at a seasonal farmers market, where the Tirallas sell the family’s Monnett Farms meat products.

There’s hope that one of the children will want to continue the family business, Tiralla said. But if not, their upbringing is teaching them life lessons, such as processing life and death, and how interconnected they are to their surroundings.

“My 3-year-old was at the bus stop one day; he was looking around and waved his arm. He said, ‘It’s the whole world, Mom,’” Tiralla said. “I think he grasped the idea that we’re part of something much bigger than just himself and this farm.”

Challenges with the cash-strapped United States Postal Service sent many Americans to their wit’s end during the COVID-19 pandemic, especially in communities reliant on…