On their first full day on the job Tuesday, the new leaders of Prince George’s County pledged to work cooperatively on a shared agenda of improving the county’s school system, economy, health care network and transportation system.

“Together the time we have is finite, but the work we do — if we do it well — will last long beyond us,” she said in brief remarks. “Years from now people may not even remember our names, but they will remember the work that we do together.”

To underscore the theme of working cooperatively, Alsobrooks presented each lawmaker a clock inscribed, she said, with “one of my favorite sayings. It’s an African proverb that says, ‘If you want to go quickly, go alone, but if you want to go far, go together.’”

The Council chambers, which was packed with lawmakers’ staffers, friends, family, and other stakeholders, applauded her comment. Many live-streamed the proceedings on their cell phones.

Turner is one of five returning lawmakers. (A sixth, Thomas E. Dernoga, served from 2002-2010.) Streeter is one of five newcomers. Because of a term limits law, elected officials in Prince George’s can only serve eight years, guaranteeing relatively frequent turnover in top posts. 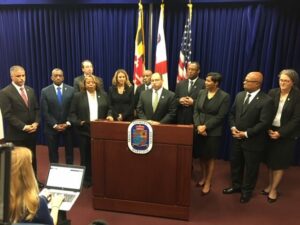 After winning the gavel and exchanging seats with outgoing chairwoman Dannielle M. Glaros (D), Turner said, “My goal is to be a bridge-builder between our returning and our new members of the Council, as well as with our new county executive.”

He said the Council is “like a football team preparing to take the field for the first game of the season.”

“Included on the dais today are seasoned veterans. We also have some proven free agents from other teams” — a reference to colleagues who have served in other posts, like former state Del. Jolene Ivey (D) and former Clerk of the Circuit Court Sydney J. Harrison (D).

“We also have some rookies eager to put their skills to the test. We even have one player returning to his old team,” a nod to Dernoga.

Before the Council session began, Alsobrooks spent several minutes amiably chatting with several lawmakers, and her easy rapport was again on full display. But many Council members expressed warm feelings for former county executive Rushern L. Baker III (D) too, and as he recently recalled, many of his signature initiatives — including his push for a large economic development incentive fund and Las Vegas-style gambling at National Harbor — became knock-down, drag-out fights.

It remains to be seen who Alsobrooks’ natural allies will be, and who will be most inclined to take her on.

“People want to support her and her goals because we share those goals. Now, we might come at it in different ways on how to get there — and that’s where you’ll see the differences. And you will see them,” Ivey predicted.

“It’s important that there be a balance, that people aren’t yes-men or yes-women, that we’re all independent voices for our constituents. We all have strong opinions and we’re all representing different constituencies, with the exception of the two at-large members.”

County voters created the two at-large positions in a ballot initiative two years ago, in an effort to curb parochialism on the Council – and increasing the number of Council members from nine to 11 in the process. Prince George’s last elected at-large Council members in 1982.

“There’s a natural check-and-balance between the branches,” said Councilman Mel Franklin (D), a two-term lawmaker from District 9 who was just elected to one of the two new at-large seats. “That doesn’t mean that we can’t work in tandem towards common vision. We just have to make sure that we know the roles and responsibilities, and the constructive way they’re designed to work together.

The Council is in recess until mid-January. Early next month the panel will hold its annual retreat. At their next scheduled meeting, on Jan. 15, 2019, lawmakers will begin confirmation hearings for Alsobrooks’ top appointees. They serve on an interim basis until they are confirmed.