Frederick County’s second county council will have a few new faces, and a new Democratic majority.

Gardner and members of the council pledged to work together for the next four years. The first four years in a transition to charter government were often rocky. 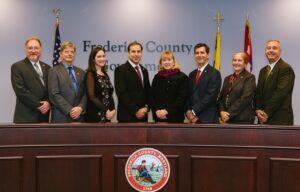 Republican Councilmen Billy Shreve and Kirby Delauter — former county commissioners who left their council seats to seek other offices in 2018 — struggled with the new division of power in charter government, as Gardner dismantled many of the policies that had been passed under the county’s previous Republican rule. Less than halfway through the last term, now-former council president Bud Otis left the Republican Party, citing vitriol among local party members.

In remarks at a ceremony on the red-velvet-draped stage of downtown Frederick’s Weinberg Center for the Arts, Dacey called for an end to divisive partisanship.

“In this election, the voters in Frederick County and across Maryland spoke loud and clear; they split their tickets, voting for both Republicans and Democrats, and rewarded candidates who ran for office and demonstrated that they could work together for the benefit of all citizens,” Dacey said.

Gardner touted successes of the past four years, including the county’s receipt of its first Triple-A bond rating from the three main international rating agencies for the first time, a designation that belongs to fewer than 50 counties nationwide. The county also increased salaries for teachers and public safety employees, fully funded pension obligations and increased financial reserves by 2 percent, Gardner said.

“We will continue to have thrifty and well-managed government,” she promised for the next term.

In the next four years, the county also will also focus on passing a comprehensive master plan to address residential growth and expansion of public schools, among other issues. Gardner also announced Monday that she plans to start several initiatives to preserve the county’s rural areas, including increased funding for an agricultural preservation program and economic development programs focused on agriculture and agritourism, as well as efforts to support struggling farmers. The county will focus on increasing affordable housing programs and opening a detox facility to address the heroin crisis, she said.

A sweet moment came early in Gardner’s remarks when she asked the crowd to join her in applauding her husband of 35 years, John.

“John gets to hear every day what’s happening in Frederick County, whether he really wants to hear about it or not,” Gardner said. “I really don’t think I could survive a campaign without his support. But what I want you to know most about John is that he is all in. He cares about Frederick County as much as I do.”

Fitzwater took her oath surrounded by her husband, parents and son, Jonah, who was born during her first term. Fitzwater said she was very proud to represent other young women and young families as she continues in elected office.

Keegan-Ayer read a quote from former President George H.W. Bush, a passage from his 1989 inaugural address that she’d picked — and tweaked — before the president died over the weekend.

“Some see leadership as high drama and the sound of trumpets calling. And sometimes it’s like that. But I see history as a book with many pages. And each day we fill the page with acts of hopefulness and meaning. A new breeze blows, a page turns and the story unfolds,” Keegan-Ayer read from the speech. “And so today, a new chapter begins. A small stately story of unity, of diversity, of generosity. A story shared and written together.”

The new county council will meet Tuesday. Included on the agenda is the election of new officers.

Despite overwhelming victories of the Democratic statewide candidates Tuesday, Republicans may be on the verge of flipping two key county governments – and helped…