For in her first remarks as executive, Alsobrooks appealed directly to the sense of pride and, occasionally, inferiority, that many Prince Georgians experience living in a region made notable by the presence of marquee communities that include Fortune 500 headquarters, top performing school systems and high-income/high-achieving residents. 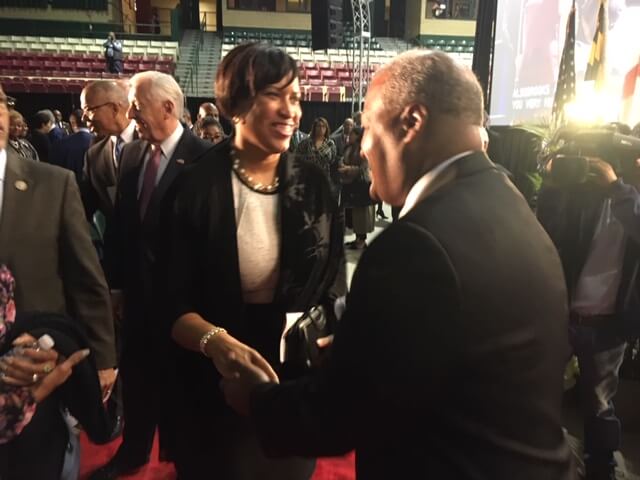 “Mayor Bowser, I love you like a sister,” she said, looking toward the mayor, who was seated in the VIP section of the audience. The crowd, estimated at 1,500 people, laughed and applauded, perhaps sensing there was more.

“I am grateful for your friendship, and proud of your vision, your leadership and your devotion to all eight wards,” Alsobrooks said. “We are sisters, raised here to be recklessly proud of our hometowns, so I know you won’t mind me saying it, but …”

Turning to the audience: “Prince Georgians, write this down. We are not Ward 9!”

While countless thousands have deliberately chosen Prince George’s County and live there by choice, the moniker “Ward 9” has gained traction to refer to people who would like to live in the rapidly gentrifying capital city but can’t afford to do so. The executive’s remark produced loud cheers that might still be reverberating through the Show Place Arena in Upper Marlboro.

“It is time we stand up with our back straight, with our chests out and our heads held high,” said Alsobrooks, a former two-term state’s attorney, pressing her case. “Stand up and be proud of who we were and who we are.”

Alsobrooks made history on Monday for being the first woman elected county executive in Prince George’s (she is the eighth person overall). But the day seemed less about her shattering the glass ceiling than it did her clear decision to reinforce themes of pride sounded often by two of her predecessors, Rushern L. Baker III (D) and the late Wayne K. Curry (D). 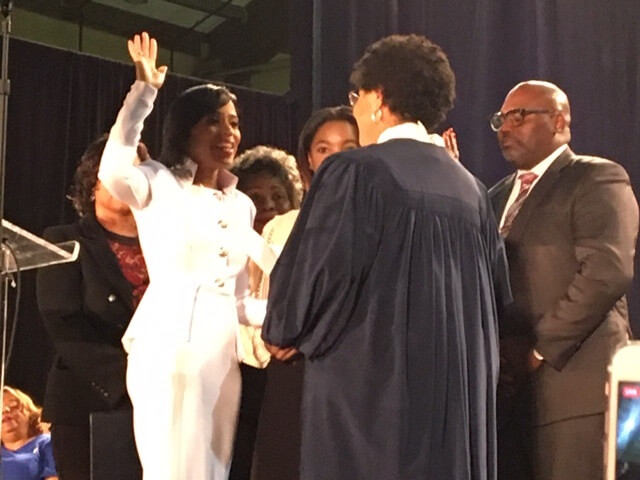 Angela D. Alsobrooks is sworn in Monday as the Prince George’s County executive. She is the first woman to hold that post. Photo by Bruce DePuyt.

The new executive laid out a handful of priorities on which she pledged to focus:

— “Building toward universal pre-kindergarten for every child.”

— “A government that is responsive, transparent and accountable. … Litter will be removed, medians will be clean and code enforcement will be a priority” (remarks that also drew applause).

— “Revitalizing established communities and ridding the county of … food deserts.”

— A “renewed focus” on both economic development and “human development,” including “mental illness and addictions.”

For the first time, the Prince George’s County Council now has 11 members, up from the previous nine. Two of the 11 serve at-large, another first. The other nine represent districts.

They, too, took the oath of office Monday.

Mel Franklin, who represented District 9 for the last eight years, was sworn in to one of the new at-large seats. Calvin S. Hawkins II, a former top Baker aide and a newcomer to elective office, was sworn in to the other.

Also taking the oath of office:

All 11 members of the council are Democrats.

Turner is expected to be elected to a one-year term as chairman on Tuesday, with Streeter serving as vice chairman, though insiders caution the situation is fluid and could still change.

“It seems to be a really nice mix of people who bring a fresh perspective and new ideas, as well as people with experience in the way things have been done, and I think you really need both,” Ivey said. “I believe that the group of people we have on the county council want to support [Alsobrooks] and her goals. We might come at it in different ways, and I believe that’s where you will see the differences, and that’s fine, as long as we’re all respectful of each other, and I know we will be.”

Just as the council represents a blend of seasoned hands and new blood, so too will the Alsobrooks cabinet.

Police Chief Hank Stawinski, a Baker hire who will remain in his post, knows Alsobrooks perhaps as well as anyone on her new team.

“When she started out as the state’s attorney, I was a detective in domestic violence, so we worked cases together on the ground level,” the chief said in an interview. “So, both operationally and in terms of leadership, our paths have been one. And I think that puts us in a position to anticipate one another’s needs and to make decisions that we will both be comfortable with.”

Although she made an unexpected cameo in Alsobrooks’ inaugural remarks, Bowser took it in stride. In an interview with Maryland Matters, she called the new executive “smart and committed, with a vision for the county.”

“She’s awesome,” Bowser said. “We have been in partnership for many years. We worked hand-in-hand when she was the state’s attorney to make both Prince George’s and D.C. safer and stronger.”

And the speech? “She started like we started, focusing on pride.”

“We will be here today and whatever she needs,” Bowser said. 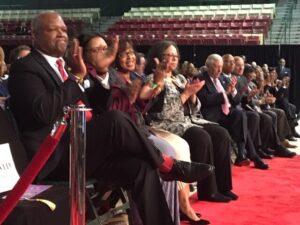 “I agree with Angela,” he said. “We have arrived. And to have two single moms lead two of the headline municipalities in the region, this is historic in many ways.”

Outgoing executive Baker received a standing ovation when he was introduced by the mistress of ceremonies, former local television news anchor Andrea Roane.

Baker told Maryland Matters he was initially “sad” to realize he would no longer be in charge of county government, but as he left the ceremony he said, “I feel ten pounds lighter!”