The members of Team 46, my Democratic representatives in Annapolis, have much to be proud of and many accomplishments. Sen. Bill Ferguson has worked diligently on the Kirwan Commission and Del. Robbyn Lewis is firmly committed to affordable health care and improving public transit.

But after voting Team 46 this past election, I’m disappointed not to hear their voices challenging those Democrats, especially in leadership, who supported Larry Hogan for governor. Gov. Hogan has hurt and will continue to hurt Baltimore. No Maryland Democrat should have assisted him. Team 46 needs to make that clear.

Team 46 should issue a public statement acknowledging and condemning those Democrats who supported Gov. Hogan’s reelection. There must be accountability within the party if it is to truly be of service to Marylanders. After calling, tweeting, and emailing everyone in Team 46 and noting their deafening silence on this proposal, may this piece serve as a last call for their leadership.

To be clear, Team 46 has vocally criticized Gov. Hogan in the past for his negative impact on Baltimore. Sen. Ferguson publicly criticized Hogan on NPR about the role he has played with reducing school funding for Baltimore City Public Schools. Del. Brooke Lierman protested outside Hogan’s Baltimore City campaign headquarters opening. Del. Luke Clippinger criticized Hogan when the governor did not support the legislature’s paid sick leave measure. After personally canvassing with her on several occasions throughout Baltimore, I am confident that Del. Lewis was the most active surrogate of the Ben Jealous campaign against Gov. Hogan. 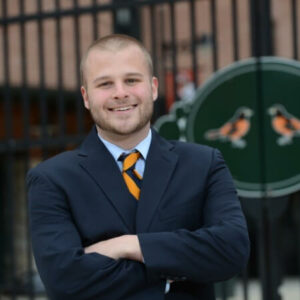 The question was never about who Team 46 supported, but their responsibility to hold elected Democrats responsible for supporting Gov. Hogan’s reelection must be explored. Too many Democrats funded and distributed “bipartisan” mailers featuring Hogan. Even more supported him by not sincerely endorsing, whether vocally or financially, the Democratic Party nominee for governor, Ben Jealous. With these actions, Senate President Mike Miller, Sen. Kathy Klausmeier, Sen. Jim Mathias, Del.-elect Courtney Watson, and Comptroller Peter Franchot placed individual position over party interest. They need to be repudiated.

Why would Team 46 eagerly and publicly denounce Hogan, a Republican, but hesitate to do the same for their Democratic Party colleagues? Democratic support of Larry Hogan will hurt constituents in District 46 and across Baltimore; this cannot stand unchallenged.

Del. Clippinger did attempt to call me the evening of Nov. 28, approximately 10 days after I reached out with this inquiry via Twitter, phone, and email. Unfortunately, I was unavailable to speak at that time as I was attending a prior commitment. Sen. Ferguson, Del. Lewis, and Del. Lierman responded to my email inquiry by essentially downplaying their Democratic colleagues’ support for Hogan. Sen. Ferguson and Del. Lewis insist that a public statement “wouldn’t accomplish anything.”

They’re wrong. As they have challenged Republicans to be better, so too must they challenge their fellow Democrats. Accountability profoundly matters but seems in short supply. The Maryland Democratic Party is in desperate need of revamping if it wishes to win back the governorship. It will require elected leaders who unapologetically fight for progressive causes without allowing insider party politics to get in the way.

As Sen. Ferguson rises in leadership, being named vice chairman of the Senate Budget and Taxation Committee by Senate President Miller in July, his ability to lead by example and direct the party in a progressive manner grows. The same is true for Del. Clippinger, incoming chairman of the House Judiciary Committee.

Team 46: Do not fear of career repercussions from your Democratic colleagues who supported Larry Hogan. Be progressive leaders, have the courage to publicly acknowledge this problematic issue, denounce Democrats for Hogan – and in doing all of this, know that your constituents in District 46 will actively support you.

The writer is a resident of Patterson Park in District 46. He is an advocate for progressive politics at the local, state and national levels.