It’s not clear how he would fare on real waves in the Chesapeake Bay, but Gov. Lawrence J. Hogan Jr. rode his “purple surfboard” to victory on Tuesday, becoming the first Republican governor since the 1950s to win a second term.

“Tonight, in this deep blue state, deep blue year, and a deep blue wave — turns out I can surf,” Hogan told a crowd of 1,500 supporters in the same Annapolis hotel where he rang in his 2014 victory.

For some analysts and political professionals, it was a foregone conclusion, supported by the polls and voters’ desire for an age of bipartisanship in Maryland – as division and tumult dominate national politics.

But high turnout, particularly among Democratic voters, left hope for the campaign of Democrat Benjamin T. Jealous, former national president of the NAACP, who brought star power on the campaign trail in the last few weeks and had, after all, upset a field of eight other Democrats in the party primary earlier this year.

In fact, the high Democratic turnout resulted in stunning Democratic victories across the state and proved that Hogan’s political coattails were even shorter than many people imagined. Democrats ousted incumbent county executives in Anne Arundel and Howard counties and won the hard-fought open seat race for Baltimore County executive – all territory where Hogan ran strong. The GOP’s vaunted “Drive for Five” state Senate seats held by Democrats resulted in only one pickup, and Democrats flipped a handful of Republican seats in the House of Delegates.

But Hogan assembled an impressive coalition of supporters in his own behalf.

In his speech, Hogan thanked Democrats and independents who crossed party lines to vote for him and praised Maryland’s history as a state of middle temperament. “I will continue to be a governor for all Marylanders,” he said. “…Tonight the voters of Maryland put aside divisive, partisan politics.”

Hogan said voters had sent a message of bipartisanship and working together “loud and clear” to Washington, D.C., and to other states.

Hogan leaned on his carefully crafted bipartisan reputation throughout the election season, noting that Democrats and Republicans alike had featured his photos on campaign mailers.

The governor criticized Jealous’ promises – to establish Medicare-for-all and universal pre-kindergarten and to cut the prison population by 30 percent – as reckless and expensive. Hogan campaigned on an economic platform, focusing on his administration’s work cutting taxes, fees and regulations.

Hogan, who forced his own surprise victory in 2014 through the state’s public campaign finance program, racked up a massive cash advantage this time around. Hogan raised $19.2 million this election cycle as of late October. Jealous had raised $3.8 million at the time. Jealous received some minor help from the Together We Rise Maryland PAC and the Democratic Governors Association, while the Republican Governors Association spent millions supporting the Hogan campaign, including paying for ads attacking Jealous that aired on voters’ televisions without response for months.

The governor’s war chest allowed his campaign to release a drumbeat of ads on social media. The Hogan campaign released a number of ads featuring the first names of the main characters. There was “Andrew,” a pediatric cancer patient and the governor’s pen pal; “Doni,” featuring Doni Glover of BmoreNews.com, talking about Hogan’s leadership during riots in the city of Baltimore; “Yumi,” featuring the First Lady and “Boyd” featuring the work of Lt. Gov. Boyd K. Rutherford (R).

Hogan boasted of endorsements from the state’s police and firefighter unions and building industry unions as well as others. Jealous received an early endorsement and support from the state’s largest teachers’ union, the Maryland State Education Association, and others, including former President Obama and former Vice President Joseph R. Biden.

Nevertheless, Hogan won over many crossover voters even in strongly Democratic parts of the state.

The race was a virtual tie in Charles County. In Montgomery County, Hogan won 44.5 percent of the vote – the first time any statewide Republican candidate has topped 40 percent in the state’s largest jurisdiction since 1994. In Baltimore City, Hogan won 31.8 percent of the vote, a 10-point increase over his performance in 2014.

Within six months of his inauguration, Hogan faced unrest in the city following the death of Freddie Gray in police custody, and was diagnosed with Stage 3 non-Hodgkin’s lymphoma.

The governor addressed those challenges at a rally on the weekend before the election.

“Our state is in better shape than it ever has been,” Hogan said, to cheers. “And just think, if we could accomplish all of this while dealing with riots and battling cancer, just imagine what we can accomplish together over the next four years.”

Hogan is the first Republican governor to win a second term since 1954.

Tennessee Gov. Bill Haslam, chairman of the Republican Governors Association, said “Hogan kept his promises to grow jobs, improve education, and be a governor for all Marylanders, and voters rightly rewarded him with a second term.” 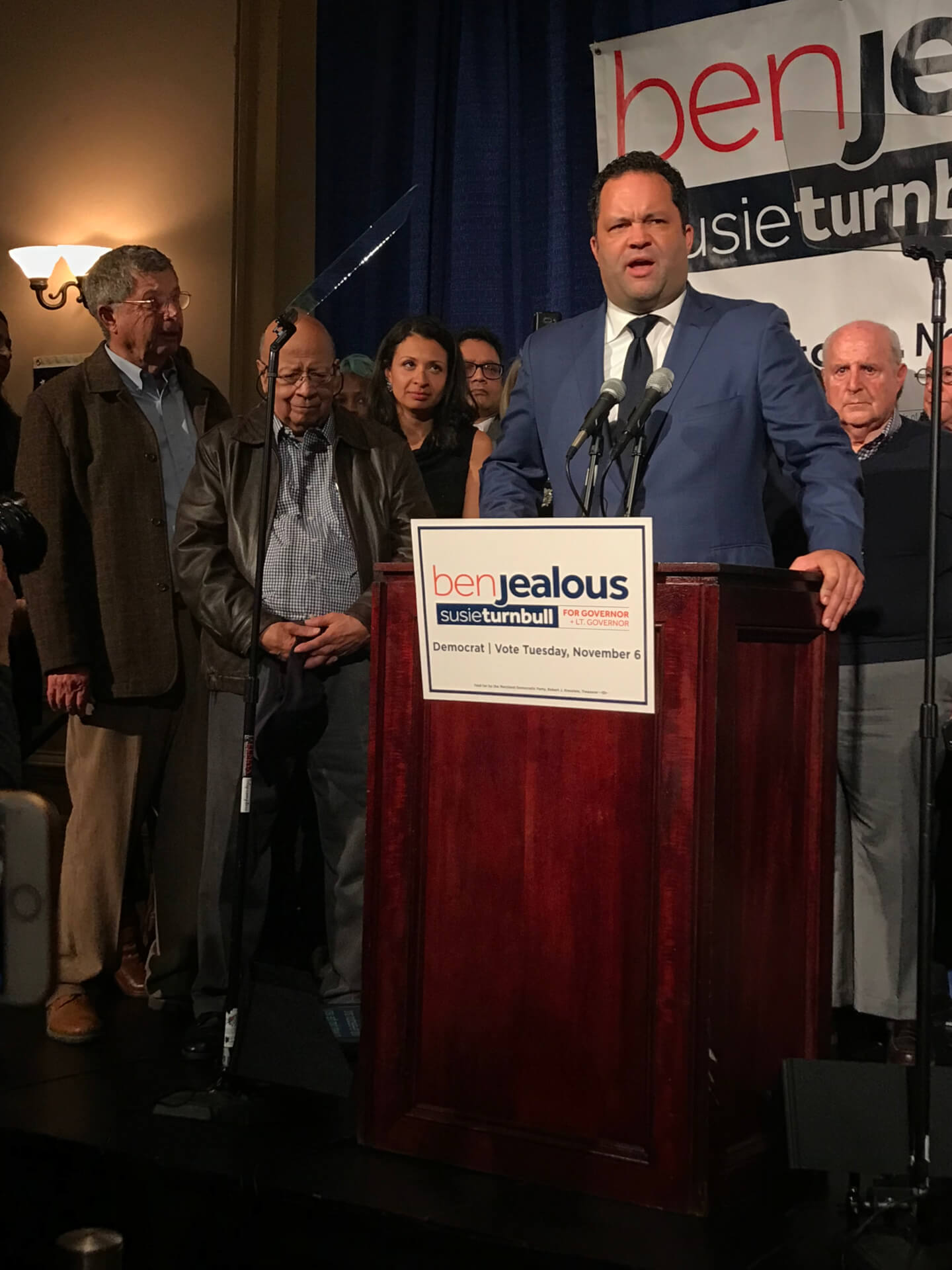 At Jealous’ campaign party at the Hippodrome Theater in Baltimore, the mood was subdued, as some supporters spent much of the night questioning why the race had been called by news outlets when voters were still in line at polling places waiting to cast ballots and no results had been posted on the state Board of Elections website.

Taking the stage around 10:45 p.m., Jealous said that he called Hogan to congratulate him on reelection, as supporters started chanting “Count the votes!”

Jealous told the crowd that he agreed it was wrong for news organizations to call the race so early, but said that it was right for him to concede after seeing about half of the unofficial results. Around 11 p.m., Hogan had secured about 57 percent of the vote, compared to 42 percent for Jealous.

“While we have different visions and values, I have no doubt that he cares deeply about our state and the families who call it home. It is not an easy task to serve as a Republican governor in a blue state,” Jealous told supporters. “As General Colin Powell told me a long time ago, it’s easy to figure out what we don’t agree on. It’s much harder to find out what we do agree on and get it done. I pledge to Governor Hogan that as we find points of agreement, I will work with him to get things done for the people of our state.”

Jealous said he also would not stop standing up for the causes that he feels are important and encouraged those who helped organize his campaign to continue working on issues.

Tom Perez, Democratic National Committee chairman, a Marylander, said on Twitter that he was “proud of [Ben Jealous] for the incredible race he ran — one focused on issues, progress, and the people of Maryland. Though he came up short, I’m grateful for his commitment to putting our fellow Marylanders first.”