Despite inclement weather, the candidates for governor slogged through a final day of campaigning on Monday, determined to win over as many last-minute voters as possible before the marathon 2018 race comes to a close.

Hogan was greeted at the Bethesda Metro Station by a small band of supporters who waited outside on the drizzly, overcast afternoon to chant “Four more years!” between photo opportunities with the governor.

“I’m not taking anything for granted. I’ve seen elections go crazy before, so I’ve been telling everyone to get out and vote,” Hogan said. “We need every single one of our supporters to come out. I don’t want anyone thinking that it’s over.”

The governor said he was confident despite talk from Democrats that early voting numbers were a good sign for them. 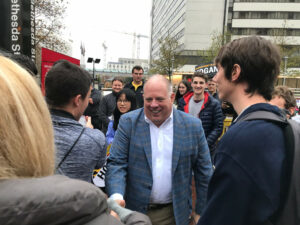 “If a blue wave comes, we’ve got a purple surfboard,” Hogan said. “And a lot of Democrats supporting us. It could be a ripple, it could be a huge wave. Either way, we’re going to win.”

Jealous spent the last hours of his candidacy thanking his sleep-deprived campaign team — and offering them words of encouragement for the final push.

Despite having trailed Hogan in the polls and in fundraising since his surprise victory in June’s Democratic primary, Jealous was relaxed and chatty as he worked the room at the state Democratic Party’s Coordinated Campaign Office in Silver Spring, one of several such command posts he visited Monday.

He greeted two dozen campaign workers and volunteers individually, inquiring what their role was and expressing appreciation for their efforts. He ended each conversation with, “Let’s win this.”

“This election is a high-stakes election,” he said in an interview. “We have the opportunity to move our state forward despite the best efforts of Donald Trump to take every state backwards.

“And I’m praying that tomorrow we win and we get to get on with making our state a model for fully funding education, passing Medicare for all and moving forward no matter who is running Washington.”

Hogan started Monday in Dundalk before heading across the state to meet commuters – though admittedly few traveled above ground at the Metro station during his visit – in Montgomery County.

“It’s kind of a shame that the weather’s not better, but people are still coming out and we’re still having fun,” Hogan said.

Rosa Guixens, a police officer in Prince George’s County, picked up her 14-year-old son, Javier Fox, from school in Silver Spring so he could meet the governor.

“I love him, how he’s just middle of the road,” said Guixens, who will take Javier with her to vote for Hogan on Tuesday. “I’d love to see another four years out of him.”

Hogan was also greeted by a group of college students who have worked for his campaign. Rajiv Goswami, an 18-year-old student at Georgetown University, said it was “refreshing” to see Hogan speak of bipartisanship in today’s political climate.

Garret Hoff, an 18-year-old freshman at George Washington University, agreed. “We need more moderate leaders like Gov. Hogan, who lead from the middle, take charge and bring everyone together,” Hoff said.

At the Democrats’ coordinated campaign office in Silver Spring, Jealous chatted with a young girl who drew a “Vote Democrat, NOT Republican” sign with markers while she and her father, a volunteer canvasser, waited for him to arrive.

He said the record-setting early-voting numbers reflect a “determination” on the part of the electorate.

“People have chosen to channel their frustration and their outrage into the ballot booth. It’s a good thing for our country,” he said, adding, “2018 is a great opportunity for the American people to wrest control of our destiny out of the hands of Donald Trump and his party.”

Hogan and Lt. Gov. Boyd K. Rutherford (R) will spend Tuesday morning at Chick and Ruth’s Delly in Annapolis, the same restaurant where they shared breakfast before their surprise victory on Election Day 2014.

On election night, they’ll be at the Westin Annapolis, the same place where their victory party was held in 2014.

Jealous will vote Tuesday morning near his home in Pasadena. He and his running mate, Susan W. Turnbull, will then criss-cross the state visiting polling sites before gathering with supporters at the Hippodrome Theater in Baltimore.