The candidates for Montgomery County executive spent the last weekend before Election Day crisscrossing Maryland’s largest-subdivision in search of persuadable voters — and offering competing visions for the county’s future.

It’s been several election cycles since Montgomery, a Democratic stronghold, saw a competitive general election contest for a countywide seat.

But the unexpected candidacy of Councilmember Nancy M. Floreen, a lifelong Democrat who became an independent in August, scrambled the race to succeed three-term incumbent Isiah Leggett (D).

In the view of most observers, Floreen and Councilman Marc B. Elrich (D) have the best shot at prevailing on Tuesday, though attorney and activist Robin Ficker (R), an energetic gadfly best known for decades of ballot questions, insists he should not be counted out.

In interviews with Maryland Matters Sunday, the candidates not only offered a range of philosophical outlooks, they differed on what the main issues of the campaign really are.

Floreen’s campaign — and a pro-Floreen Super PAC, County Above Party — have taken in hundreds of thousands of dollars in cash from the business community, money that allowed them to run TV spots, mail literature to county voters and buy yard signs.

Floreen dismissed Elrich’s comments, saying that ‘who pays for growth’ is a “sexy issue [for] reporters.”

“I think the real issue is leadership, about having someone who is reflective of the values of our whole county and not just a very small portion of it, someone who is not an ideologue,” she said. “That’s who my opponents are, both of them.”

“What has not been covered is the vision for the future of Montgomery County. [Elrich and Ficker] have yet to craft anything that makes me feel inspired.”

Elrich and Ficker are both participating in the county’s new public campaign financing program, which provides generous matching funds for candidates who accept small donations and eschew corporate funding. In addition, there is a pro-Elrich Super PAC that is hitting Floreen for her reliance on real estate and other business interests for campaign cash. 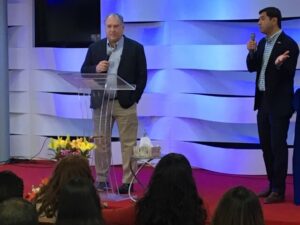 Ficker said he is the most “independent” candidate in the race. “I haven’t taken any contributions from the unions nor developers,” he said. “Just ordinary citizens.”

Ficker has stressed what he calls the Three T’s — taxes, term-limits and the “Takoma Park Trapezoid,” a reference to the southeastern part of Montgomery County, home to a disproportionate number of the county’s leaders.

“I’m the only one who would provide any geographic diversity. I drive I-270 every day. The Upcounty has been left out. And I mean Rockville, Gaithersburg, Germantown, Damascus, Olney, Bethesda, Potomac. It’s all been left out.”

The sponsor of a successful ballot question to require a unanimous vote of the Council for any tax increase above the rate of inflation, Ficker called his opponents “tax increase specialists,” saying, “Both of my opponents have voted for every tax increase to come before the Council.”

While Democrats greatly outnumber Republicans in Montgomery County, a big unknown heading into Tuesday is whether GOP voters will stick with Ficker, who has won only once in 20 tries for elective office, or will they choose one of the other two.

Leggett and most of the county’s Democratic officials have endorsed Elrich. Floreen has the backing of former county executive Douglas M. Duncan (D) and former Rockville mayor Rose Krasnow (D).

Another unknown is the issue of gender. Floreen is undefeated — 9-0 dating back to her run for mayor of the small town of Garrett Park in 2000. With Angela D. Alsobrooks set to become the first woman executive in Prince George’s County, Mayor Muriel Bowser cruising to reelection in Washington, D.C., and Nancy Navarro likely to lead the Montgomery County Council for the next year, Floreen believes the future is female.

One thing all the candidates know is that they have to push through the tape, no matter how tired they are. Still fresh in their memory is Elrich’s slim victory in the Democratic primary in June— a mere 77 votes over his nearest rival.

A portrait of the late Rep. Elijah Cummings (D-Md.) was unveiled Wednesday where it will hang in the U.S. House Government Oversight and Reform…