With Election Day fast approaching, both Republicans and Democrats in Maryland seem bullish on their chances.

Can both be right?

But Democrats, buoyed by early voting numbers and their strongest ground game in several election cycles, sense momentum — and even if that doesn’t fully accrue to Jealous, they believe it will boost their candidates in competitive down-ballot races.

“I think there’s a lot of energy for Democrats,” House Speaker Michael E. Busch (D-Anne Arundel) said in an interview after a raucous rally of District 30 Democrats at an Annapolis community center Saturday afternoon, which included former U.S. Sen. Barbara A. Mikulski (D), U.S. Sen. Benjamin L. Cardin (D), two members of Congress, and all the candidates for local and legislative seats. “I’ve never seen the enthusiasm like the kind we’re experiencing.”

Hogan and Lt. Gov. Boyd K. Rutherford (R) held their 38th rally of the campaign at a firetruck manufacturer in Grasonville, complete with a country band and free beer for the crowd of hundreds.

To chants of “Four more years!!” Hogan regaled the crowd with success stories of his governorship, his administration and “the greatest lieutenant governor in America.”

The governor took the stage as “The Final Countdown,” from the Swedish rock group Europe, blared through speakers. He admitted being a bit tired and hoarse after months on the campaign trail.

“I’ll promise you this: If all of you will give us everything you’ve got for the next 72 hours, I promise you, that Boyd Rutherford and I and our entire administration will keep working hard for you every single day for the next four years,” Hogan said.

He drew uproarious approval when he mentioned cuts to taxes, regulations, and, nearly in the shadow of the Bay Bridge, tolls.

Hogan, who is seeking to become the first Republican governor to win a second term since 1954, told the crowd multiple times that he was a leader they could trust, starting with his first campaign.

“I said that our main focus was we’re gonna try to get the government off our backs, and out of our pockets so we can grow the private sector, put more Marylanders to work and turn our economy around. And you know what? I’m new to this politics thing, I didn’t know any better, I’ve just done exactly what I’ve said I was going to do,” Hogan said. “Turns out, this is a new thing in politics. No one’s doing that. But people kind of like it.”

Hogan thanked Firefighters for Hogan for their support and mentioned his endorsements by the state’s Fraternal Order of Police lodges and trade unions, among others.

“I know a few of you here are Republicans. I also want to give a shout out to all of those Democrats for Hogan who are here,” Hogan said, touting his crossover appeal in more Democratic parts of the state.

“Our state is in better shape than it ever has been,” Hogan said, to cheers. “And just think, if we could accomplish all of this while dealing with riots and battling cancer, just imagine what we can accomplish together over the next four years.”

Then a person from the crowd stole the show: “And then you can run for president!” he shouted, drawing approval from the rest of those assembled.

Hogan breezed past the interlude and mentioned the increasing number of poll respondents over the past four years who feel the state is on the right track.

“So, look, it’s not that complicated. It’s pretty simple: if it ain’t broke, don’t fix it,” Hogan said. “If you think the state is heading in the right direction, and you approve of the job that we’re doing, then maybe you should just go out and vote to keep me and Boyd Rutherford and the rest of our team working hard for you for another four years.”

Hogan refrained from speech-making Sunday but spent the day retail-politicking — first at a bagel shop in Pikesville, then at tailgate parties outside M&T Bank Stadium before the Baltimore Ravens game.

Hogan’s popularity in a normally liberal suburb like Pikesville shows the breadth of his appeal. This is territory that Hogan won narrowly in 2014 but that Hillary Clinton won bigger in 2016. Hogan is likely to win it again, by a solid margin, this time around.

Jealous, meanwhile, spent the weekend in the company of his childhood friend, comedian Dave Chappelle. Joined Saturday by actress Rosario Dawson — a progressive activist who was, like Jealous, a key supporter of Vermont Sen. Bernie Sanders’ White House campaign two years ago — they hit rallies and parades in Wheaton and Baltimore.

On Sunday, Jealous and Chappelle rallied with members of the teachers’ union in Prince George’s County and then held separate events at Democratic coordinated campaign headquarters in Prince George’s and Charles counties. They also went door-knocking — and Chappelle’s efforts for Jealous even rated a mention on the celebrity website TMZ.

On Sunday evening, Jealous and his running mate, Susan W. Turnbull, had a happy hour with environmental leaders at Denizens Brewing in downtown Silver Spring — which is co-owned by Julie Verratti, who ran unsuccessfully for lieutenant governor this year on a ticket headed by tech entrepreneur Alec Ross.

Hogan’s across-the-board popularity keeps some Democrats privately nervous. The last public polls on the race, now several weeks old, showed Hogan with leads in the neighborhood of 20 points. That’s a tough hill for Jealous to climb even if there is a Democratic surge.

One private Republican poll taken last week — not for the Hogan campaign or the state GOP — whose results were shared with Maryland Matters showed Hogan maintaining a 20-point advantage over Jealous.

‘We’ve got the intensity’

The gubernatorial race is the marquee contest in Maryland on Tuesday, but there are multiple ways to measure the parties’ success on election night. And the countervailing political forces in the state make it hard to predict what might take place farther down the ballot.

Democrats fret that some of Hogan’s popularity transfers to other GOP candidates in competitive races, including those for state Senate, state House and county executive. A top Republican priority this year has been flipping five state Senate seats now held by Democrats, which would make it harder for the Senate to override Hogan’s vetoes, assuming he wins a second term.

Maryland Republicans are painfully aware that this is turning into a pretty good cycle for Democrats nationally — and that there is plenty of Democratic energy in the state. That makes the task of denying the Democrats their veto-proof majority, or of winning the vacant county executive seat in Baltimore County, despite Hogan’s popularity there, far more challenging for the GOP.

“The national trend — while Hogan will be spared — the [blue] wave in the state will amount to Republicans not being able to pick up those five [Senate] seats,” Mileah K. Kromer, a Goucher College political science professor and pollster, predicted in an interview Sunday.

That down-ballot energy was on noisy display at the District 30 rally in Annapolis Saturday. Several speakers suggested that Steuart Pittman, the Democratic nominee for Anne Arundel County executive, has a real shot of upsetting Republican incumbent Steve Schuh, and activists seemed most committed to keeping the open District 30 seat in Democratic hands. 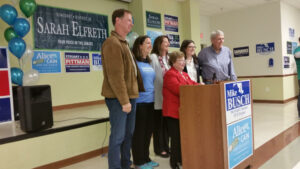 That level of energy is evident around the state, Kathleen Matthews, the state Democratic chairwoman, said in an interview.

“I believe we’ve got a people advantage – we’ve got the intensity,” she said, predicting that in the final days of the campaign, as they finally focus on the gubernatorial election, Democratic voters would like what they see of Jealous and return to the fold.

That may be why Hogan injected a note of caution into the conversation during his rally in Grasonville on Saturday evening (though the state GOP believes it has one of its best grass-roots operations in years as well).

While Hogan said polls showing him with a wide lead “look really good,” he added: “But I don’t care about those polls. There’s only one poll that counts and that’s the one they take next Tuesday. And it matters who shows up.”

He asked the crowd not to take anything for granted and told them to bring their friends, family and coworkers to the polls.

“Remember, he won a come-from-behind victory four years ago and I don’t think he wants to be on the receiving end of one,” said Kromer, the Goucher College pollster.

“I promise you, I’m running like we’re 20 points down,” Hogan said on Saturday. “I’m working every single day, seven days and seven nights a week … I don’t even have a voice left.”

And then the governor left the stage, to the song that became his anthem during his cancer battle: “Live Like You Were Dying.”