The state Senate’s two most vulnerable incumbents are not going down without a fight – or without a very robust campaign war chest.

The latest campaign finance reports, which cover fundraising and expenditures between Aug. 22 and Oct. 21, show that the eight most competitive state Senate races are each costing hundreds of thousands of dollars.

Why are these races attracting so much money?

Because after reelecting Gov. Lawrence J. Hogan Jr. (R), Maryland Republicans have made flipping five Senate seats now held by Democrats their top priority for this election cycle. If the GOP succeeds in winning five extra seats, it will be almost impossible for the Senate to override Hogan’s vetoes of Democratic legislation, assuming Hogan wins a second term.

The Senate battleground is largely being fought on territory favorable to the GOP. But Democrats – especially their incumbents – have been aggressive fundraisers.

The two most vulnerable Democrats, Sen. Katherine A. Klausmeier of Baltimore County and Lower Shore Sen. James N. Mathias Jr. – both of whom are being challenged by first-term Republican delegates – have each spent more than $200,000 in the past two months but still had more than $100,000 in their campaign accounts as of Oct. 21. Klausmeier raised $129,675 in the past two months, while Mathias took in $96,574. 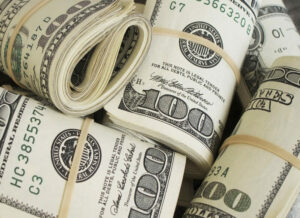 Money may not save them: They are both running in districts where Hogan is expected to romp – and may have long coattails. But it sure has given these vulnerable incumbents an opportunity to try to tell voters that they aren’t typical Annapolis Democrats.

Here is a summary of the recent fundraising in the eight most hotly-contested Senate races:

The money chase between another vulnerable Democrat, Sen. Ronald N. Young – whose career in local politics began in the 1970’s – and businessman Craig Giangrande is about on par. Giangrande buttressed his campaign account with $29,000 in loans over the past two months — and $85,650 overall.

U.S. Rep. Andrew P. Harris (R) cut a $3,000 check to Giangrande during this fundraising period — bringing his total investment in the race to $5,000 — and his political action committee, Chesapeake PAC, added $6,000. Young got big checks from the political arms of two powerful unions, the American Federation of State, County and Municipal Employees ($6,000) and the Maryland State Education Association ($4,000). He also received $6,000 from wealthy congressional candidate David J. Trone (D), whose district overlaps with Young’s.

The district, centered in the city of Frederick, is trending Democratic – a fact that could keep Young afloat despite Hogan’s popularity.

Democrats have to sink or swim on their own in this district, which takes in communities such as Perry Hall, Middle River and White Marsh, because their state and national leaders are not popular with the electorate. Klausmeier has been working hard to associate herself with Hogan – who in fact is strongly backing Miele. The district is also seeing a competitive House race.

This is the one district where Democrats think they have a chance of stealing a Republican-held Senate seat – though fundamentally the district may just be a little too conservative, even though Democrats are high on their nominee, Katie Fry Hester, an engineer and consultant on corporate sustainability.

The Ellis-Middleton primary was a racially charged affair, and Republicans are hoping that Middleton allies abandon the Democratic nominee and give Dotson a look. It could happen, though the district has a Democratic registration rate that tops 60 percent.

Dotson has been reluctant to self-fund in a major way; he dropped $25,000 of his own money into the campaign over the last two months. Ellis, on the other hand, loaned his campaign $128,000 since mid-August, and has chipped in $187,000 total.

Sarah Elfreth, a 30-year-old Democratic and civic activist, has generated lots of enthusiasm lately – as witnessed by the fact that she outraised the Republican, former Del. Ronald A. George, by a more than 3-1 margin in the past two months. She has gotten contributions in this period from several prominent Democrats, including U.S. Sen. Chris Van Hollen, Reps. Anthony G. Brown, Jamie Raskin and John P. Sarbanes, Trone and former Rep. Thomas McMillen.

But George has been steadily raising money ever since he entered the race more than two years ago. In the past two months, George got $4,000 from Harris and $5,000 from his PAC, plus $6,000 from the Maryland Business for Responsible Government PAC.

George will be helped enormously by Hogan’s popularity in his home district; Elfreth will be aided by a flurry of Democratic activity in that section of Anne Arundel County. Sen. John C. Astle (D) is retiring after 24 years in the Senate.

In the race to replace retiring Sen. James E. DeGrange (D), the Republican, Councilman John J. Grasso, has been racked by controversy after criticizing Muslims and immigrants on his Facebook page last month, and he raised just $7,212 since mid-August — $2,000 from the Presidential Coalition, an organization connected to the conservative national group Citizens United, which is headed by David Bossie, the Republican National Committeeman for Maryland.

The Democrat, Del. Pamela G. Beidle, has been a steady fundraiser throughout the cycle. In the most recent two-month period, she has received $4,500 from the AFL-CIO and $3,500 from the teachers’ union.

The political headwinds are at a gale force for Sen. James N. Mathias Jr. (D) in a district that Hogan won by 40 points and that President Trump carried by 28. But Mathias continues to vacuum up money and defy political odds. AFSCME recently cut the incumbent a $6,000 check, and he is spending about $140,000 on TV ads.

The Republican, Del. Mary Beth Carozza, has been no slouch on the fundraising front, either. MBRG dropped $6,000 on her behalf. Buckeye Patriot PAC, controlled by former U.S. Rep. David Hobson (R-Ohio), contributed $5,000.

In the view of most political professionals, this district, which runs from Towson to the Pennsylvania border and is currently held by Sen. James Brochin (D), who is leaving after a failed run for county executive, is likely to flip. But attorney Robert Leonard (D) is running an energetic campaign, and Republican Del. Christopher R. West and his wife just felt the need to invest an additional $100,000 into the race – bringing the family total to $382,000 for the election cycle.