With the close of voter registration last week, the gap between Republicans and Democrats has grown smaller since the last gubernatorial election in several key jurisdictions.

In Frederick County, where incumbent Democratic County Executive Jan Gardner is being challenged by Republican Del. Kathryn Afzali, the gap between Republicans and Democrats is just 1.4 points. According to data posted Monday by the Maryland State Board of Elections, there are 67,012 active eligible voters registered as Republicans in the county for the election, compared to 64,669 registered as Democrats.

Seven of Maryland’s “Big Eight” jurisdictions are electing executives and councils this year. Here’s a look at the registration numbers in counties where the races could be close: 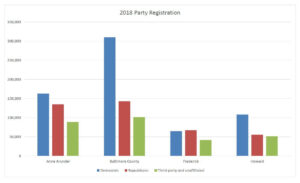 When it comes to the State House, money is pouring in to a handful of races that could break Democrats’ supermajority in the State Senate:

Party registration numbers are close in several of the districts (see above).

In District 9, Democrats have a 1,546-voter advantage over Republicans in registration. But more than 23,000 voters ― nearly 24 percent of all registered voters in the county ― are from third parties or are unaffiliated.

In fact, the number of Democrats registered in the district decreased by 156 voters since the 2014 gubernatorial general election. It is the only one of the most hotly contested Senate districts that saw a decrease in registration numbers within either major party: 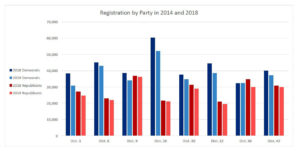 Statewide, the share of voters registered as Republicans and Democrats has remained largely the same since the last gubernatorial election, though the state added more than a quarter-million additional voters to the rolls. About 54.98 percent of active eligible voters are Democrats, compared to about 25.5 percent Republicans. Democrats added 137,603 party voters since 2014. Republicans added 58,805, pushing party registration just into seven-digit territory: 1,008,369.

The deadline to register to vote on Election Day was last Tuesday. Voters who missed the registration deadline can register and cast ballots during the state’s early voting period, which runs from Oct. 25 to Nov. 1.

Senate Judicial Proceedings Committee held its first briefing of the 2023 legislative session, which the committee chair says “will be very, very busy.”