The candidates vying to succeed U.S. Rep. John K. Delaney (D) in Maryland’s 6th District are hammering one another with a new series of ads.

Republican Amie Hoeber’s spot, hitting airwaves in Western Maryland Thursday, makes use of a quote from Democratic candidate David J. Trone, who told The Washington Post in 2016, “I sign my checks to gain access,” a reference to his efforts to influence policy in state legislatures where the business he founded, Total Wine & More, has stores.

The 30-second ad also notes that he settled, without admitting guilt, allegations that he exceeded state campaign finance limits between 2011 and 2014, paying $60,000 in fines in the process.

“We can’t let David Trone buy our vote in Congress,” the spot concludes.

Trone, meantime, launched an ad this week that also quotes The Washington Post. His spot calls Hoeber a “standard-issue partisan with no fresh ideas.”

If elected, the commercial claims, Hoeber would vote to defund Planned Parenthood and repeal the Affordable Care Act.

Hoeber’s spots are running on WDVM (Channel 25), an independent station in Hagerstown that for decades was NBC affiliate WHAG-TV.

“Our goal is to drive [turnout] out of Frederick and Washington counties,” said Hoeber Campaign Manager Paul Ellington. “I really think [those counties] will be the deciding factor in the election.”

The 6th District includes much of western Montgomery County and the western panhandle of the state.

Trone’s ads are running on WDVM and on the more expensive cable and broadcast stations in the Washington, D.C., suburbs. A wealthy self-funder, he has a significant financial advantage in the race to succeed Delaney, who is not seeking reelection in order to run for president in 2020. 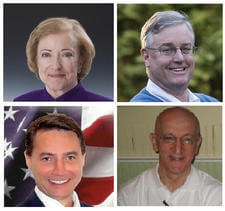 Documents provided by the Trone campaign show that — on WDVM alone — Trone’s ad buy is half again as large as Hoeber’s.

His campaign called the attacks by his GOP rival “false.”

“Hoeber is using the money she’s raised from PAC’s and lobbyists to do their bidding and launch a false attack against David Trone, who refuses to take their money,” said spokesman Alex Koren.

“That’s because the PAC’s don’t like David because they know he’ll be the people’s congressman, not theirs.”

Echoing a charge made against Trone in this year’s primary, and in his 2016 bid for Congress in the 8th District, Ellington said, “It’s glaringly obvious — he’s buying access to influence.”

The two candidates face off in debate for the first time Tuesday night in Gaithersburg.

In a related development, Trone on Thursday picked up an endorsement from the Service Employees International Union Local 500. The union, which largely represents public school and university workers, endorsed one of Trone’s rivals, state Sen. Roger Manno, in the Democratic primary.