Maryland’s “green prom” took place Tuesday night in Annapolis. The Maryland League of Conservation Voters’ annual Awards dinner has grown by leaps and bounds in recent years, and with the election less than a month away there was an urgency to the proceedings. Benjamin T. Jealous, the Democratic nominee for governor, who has been endorsed by LCV, was there along with his running mate, Susan W. Turnbull, and dozens of other Democratic elected officials. But the Hogan administration was represented – during the cocktail hour, at least – by Ben Grumbles, the state environment secretary, who is well respected by greens. 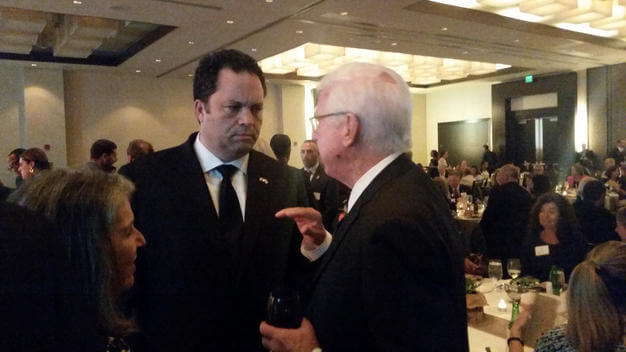 More than 320 people attended, and more than 60 organizations served as sponsors – a testament to the group’s growing relevance and political strength. “This is the heart and soul of the movement – the money, the advocates, the legislators,” said Sen. Paul G. Pinsky (D-Prince George’s), who is slated to become the next chairman of the Education, Health and Environmental Affairs Committee. The dinner was vegetarian fare; the program was printed on recycled paper. For the first time, the Maryland LCV handed out a youth leadership award, to Baltimore Beyond Plastic, a group of high school students who work on environmental issues and recently helped lobby the City Council to ban Styrofoam. “I don’t know what you were doing in high school, but I know I wasn’t advocating and talking to legislators,” said City Councilman John T. Bullock (D). Del. Marc Korman (D-Montgomery), received the legislator of the year award, primarily for his legislation providing a reliable funding stream for the Washington Metro System. But he was also a sponsor of legislation requiring state pension funds to take climate change into account with their investments and a bill extending the state’s participation in a regional climate alliance. “Maryland can’t solve the globe’s problems all on our own, but we can do our part and we can lead the way for other states and countries,” Korman said. The LCV also gave an award to ShoreRivers, a new consortium of groups dedicated to protecting the waterways of the Eastern Shore, and will be bestowing one on Salisbury Mayor Jake Day later in the month. Abigail Ross Hopper, the president and CEO of the Solar Energy Industries Association and former director of the Maryland Energy Administration, served as the dinner’s keynote speaker. She spoke of the economic might of the clean energy industry. “Don’t believe what anyone tells you about solar being a partisan issue,” she said. Hopper also urged the environmental movement – and companies doing green work – to focus on diversifying their workforce and reaching out to minority communities and environmental justice organizations. “The clean air future belongs to all of our communities,” she said.