“It is time for the governor to understand that the bullying tactics that he’s used in this most recent video cross the line,” Jealous told reporters at a news conference. A Hogan web video, “What’s Ben Jealous Running For?” features clips of the Democrat making mistakes while speaking publicly.

In one comment, he talks about “removing Larry Hogan from the White House.” More recently, he is seen telling supporters, “Just give me your all for the next 31 days and you’ll be looking at the next governor of Virginia. 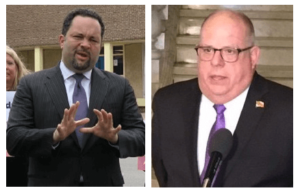 Not included is his mislabeling, over the summer, of the state’s highest court, which he called the “Maryland Supreme Court.” Jealous, who has been candid about his lifelong struggle with stuttering, said he will sometimes engage in “word replacement” to avoid verbal stumbles.

“When you’re exhausted, things might be a little more likely to go wrong,” Jealous said. “The governor has chosen to take those moments when things have gone wrong and mock me.”

In a statement, the Hogan campaign rejected Jealous’ claim, accusing him of seeking to sidestep responsibility for “his penchant for making embarrassing gaffes.” “Whether it was dropping the f-bomb to a reporter, saying he is running for governor of Virginia or promising to raise taxes, Mr. Jealous can’t simply disown his words every time he gets in trouble with voters,” the campaign said.

Jealous said he didn’t realize he had said “Virginia” until someone pointed it out to him.

“I was told [about it] like 15 seconds later and I was like, ‘oh!’” he said with a chuckle.  “In all my life I’ve never seen a politician use their advertising resources, online included, to mock a candidate because of a speech impediment. It is a new low in Maryland politics.”

While the 35-second spot is not running on radio or TV, it’s proving popular on Facebook, where, as of Tuesday afternoon, it had been shared 343 times and viewed by more than 22,000 people.

The Jealous campaign admits it posted, then removed, the video of his speech to Maryland state workers, the one in which he said “Virginia” instead of “Maryland.” Jealous encouraged people to watch the whole speech, because it contains important messages about how state employees are treated.

He told reporters today that it has been posted multiple places.